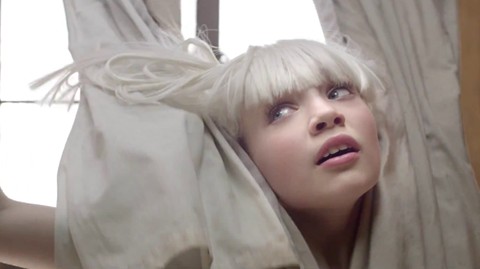 “Sia – Chandelier …as soon as humanly possible,” was the text I received last week from our friend Matthew Downes.  I figured I should probably get around to watching it sooner rather than later if it indeed was that necessary.

Through more than half of “Chandelier” you are watching in disbelief as the absolute freeing nature from both song and video have your senses so solidly captivated.  It is only then that you can actually regain consciousness and acknowledge that you’re watching a music video in your house on your couch.  Of course, that might not even happen until the screen goes black.

I had the distinct pleasure of not having heard the song until the visual magic was unveiled in front of my eyes empowered by Sia’s powerhouse vocals.  I must say, it was a toss-up of which piece was taking control, since they were so effortlessly entwined, and if anything was off just one bit (girl’s age or hair length, camera movements and angles, etc.) the song would have been given the upper hand.  Yet, there was nothing to correct only to be fascinated with.

It’s not just the flawless ability of Maddie Ziegler (11 year old dancer, actress, etc. appearing on “Dance Moms”), or the phenomenal choreography that spirits this video into the top spot for 2014.  Of course, those pieces are essential in order for you to feel in the gut of your stomach the feeling we find so hard explaining.  A combination of yearning and appreciating of Zielger doing exactly what our soul desires upon the bold emotion sucking our breath away in music such as “Chandelier.”  That intensity our body feels listening to a song bursting with the ideology of letting go is unable to really have an outlet for it.  Typically we just let it smooth itself out and though we carry a piece of it with us, mostly it just vanishes as quickly as it came.  But it’s with other artistic outlets, such as painting, dancing, singing, or even writing that we can let those energies out.  Sia chose dancing as her emotional channel for her newest release.

The vision of Ziegler catapulting or moving with such soft fluidity around a dungy apartment floods my soul with the idea of that person being inside each of us.  That’s my soul ricocheting, drifting backwards onto a couch, and gliding around with such elegance as I’m introduced to the pop song of the year “Chandelier.”  It’s exactly what I would do, if I could, when hearing something so powerful.  Ziegler is able to portray exactly how we’re feeling at that very moment in time with no constraints and in such a beautiful way.  Viewing her as my inner self, I didn’t gain a sense of concern or even question a young girl dancing contemporarily to ideas that are older (i.e. drinking). Instead, I’m so grateful that she has the distinct ability to take all of my energy and emotion and let it pour through her in perfect lyrical movements.  It’s art in the purest sense.

The music video for “Chandelier” has already over 5 million views since it’s release on May 6th and I personally haven’t watched a music video more than once in quite some time.  And on my fourth watch, I still get chills and an outpouring of connection.   Sia’s sixth album (1000 Forms Of Fear) is set to release in June and if the other songs are on the same caliber as the one featured here, I’m sure you’ll be hearing all about it.