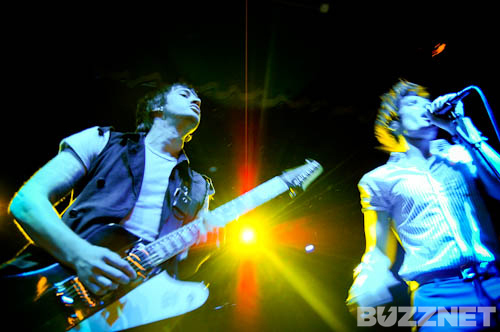 “That is one long line.”

“You mean, a long line of 15-year-old girls.” I added surprisingly, casting a glare at the multitude of high school females who were sitting on the sidewalk of Boston eagerly anticipating getting to the front of The All-American Rejects show at the Royale (Boston).

I was quite excited to see AAR, not only had I fallen in love with their new album, but I had been a fan since middle school and had not yet gone to any show.  It was due time.  With my friend feeling the same we scoffed at the young girls who must have been listening to The Cheetah Girls when we were learning all the words to “Why Worry.”  Besides my superiority complex, I was also a bit nervous about lead singer Tyson Ritter.  I had formally been a huge fan.  However, between the music video for “Beekeeper’s Daughter,” and watching an interview on the making of, he put a bad taste in my mouth.  Coming across as very arrogant and playboy’ish I sincerely hope he wouldn’t carry this across on stage.

Waiting for the opening band, Rocket to the Moon to get started, the audience was entertained with Twitter posts being displayed on a screen.  Those in the audience frantically went on twitter to post brilliant philosophical thoughts about AAR.  Such as, “Tyson, can you sleep with my friend Chelsea?,” or “I don’t care about AAR, I’m just here for Rocket To The Moon,” and of course “let’s play the penis game!”  To which seconds later, everyone started playing.   I turned to my friend and said, “Now I remember what high school was like.”  As annoying as it was, the excitement remained for hearing fresh new music and AAR. 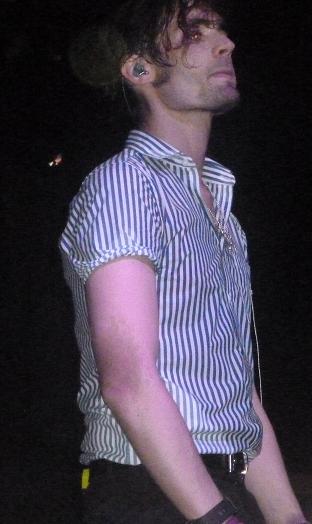 Rocket to the Moon is a Boston-originated band and had a few good tunes.  It seemed that their newer music was more ‘country,’ while their older had a stronger emo feel.  They had great stage presence and really got those high school girls going.  Feeling the vibe and catching their facial expressions you could tell these guys loved what they were doing and every second of being on stage was a thrill.  As an audience member who goes to quite a few shows, it is always nice to see this enjoyment radiate from the opening performers.

The screen came back, twitter was refreshed, and the crowd was antsier and more vulgar.  We were jostled to a new location and I made sure to subconsciously let the boy standing next to me know that not only was I not going to take his rowdy behavior, but that I was old enough to be his teacher in school.   Lights out, music turned up…and a long pause of anticipation with the screaming and hearts beating louder and louder of the young females we were surrounded by.   I crossed my fingers and desperately hoped that AAR would bring it and not just half-ass it.

Right off the bat Tyson started strong “Please just don’t play with me, my paper heart will bleed…” My friend and I looked at each other, eyes sparkled with recognition and memories of being 13 and I was able to breathe a sigh of relief.  I wasn’t sure how Tyson was going to act when he wasn’t singing, but AAR sure knew how to captivate the audience of “old” and show us the respect we deserved.

Back and forth between their first, second, third and latest album all mixed so that you never knew what was coming next.  This, my friends, is exactly how a set list should run by artists who have put out four records, unless one of them really sucked (oh wait, When the World Comes Down may count here).   Though I do wish they played more off their new album, I was pleased with how they laid out their set list and it made for an excellent experience. 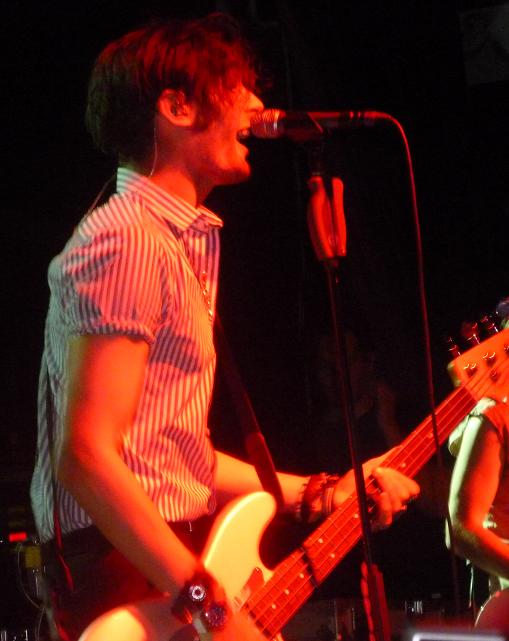 Tyson…oh, Tyson.  Yes, I was absolutely impressed with his ability of not being cocky and arrogant with the amount of crushes in the audience.  He did know they were there, and instead of being a complete playboy about it, he had fun with it.  Laughing at himself post movements or comments that were on the more sexual side, improv dancing to the keyboardists’ whimsically played notes, speaking in a southern/British accent (I don’t even know) to those in the balcony or “upper tier,” and after the show ended beginning to put drumsticks down the front of his pants before throwing them into the audience (he of course was laughing at his ability to do such things to such a hormone-infested crowd).   He was having an absolutely fantastic time, as were all the females in the audience.

More notable portions of the show included anything played off The All-American Rejects, a compilation of scenes from Fresh Prince of Bel-Air projected on a screen of Carlton doing his trademark dance while AAR played “Fast & Slow,” Tyson making note of fans who loved them in middle school and are now 25 (to which I screamed and raised my hand in honor),  “Heartbeat Slowing Down” which was absolutely amazing to see live with all the emotions pouring out on stage just as you feel while listening, the intense talent being radiated from “Gonzo,” and the fact they played “Walk Over Me.”  With the latter, I completely indulged myself in every millisecond of the four minute moment I had been wishing I could see live ever since I heard the song.  Thank you, All-American Rejects for allowing me that moment.

Here’s the part that bothered me.  The All-American Rejects are not just pretty boy Tyson, they have songs that are well put together, there is a spark of something different and excellent, no two songs sound the same, and their instrumentation is quite commendable.  Guitarist, Nick Wheeler, did an amazing job on lead guitar and knowing the moments where solos were about to take place, my eyes went right to Wheeler.  He was able to pull this all off because he can.  With all of their respectable musical genius, I became really upset that 80% of the audience did not realize this.  Where are all the male fans that know a good guitar solo when they hear one (yes, I’m being stereotypical here, but figure with me being a female and picking up on it you’ll let me live it down)?  Where are the fans that enjoyed them in 2000, both male and female alike?  It is pretty unfair for AAR to be thrown into this continuous cycle of high school girls, after high school girls.

Besides Tyson’s actions with the crowd (and doing this only because he’s playing to the masses -a crowd of younger girls), there is no reason why this is not a fantastic band to see live if you’re 21+.  More mature audiences must see AAR.  This band absolutely knows what they are doing and their line-up of songs traces back to their first album, as well as making sure the songs they play are perfect for shows.  Being able to sing back at Tyson and throw my fist in the air for more notable lyrics is what music is supposed to make you do when you see it live.  If they can pull this off, it means they are pretty damn good live.  If everyone assumes young girls will just go, then AAR will never build a strong, mature audience, which frankly is unfair to everyone.   Go.  Bring a bunch of friends, buy lots of beer and have a kick-ass time.