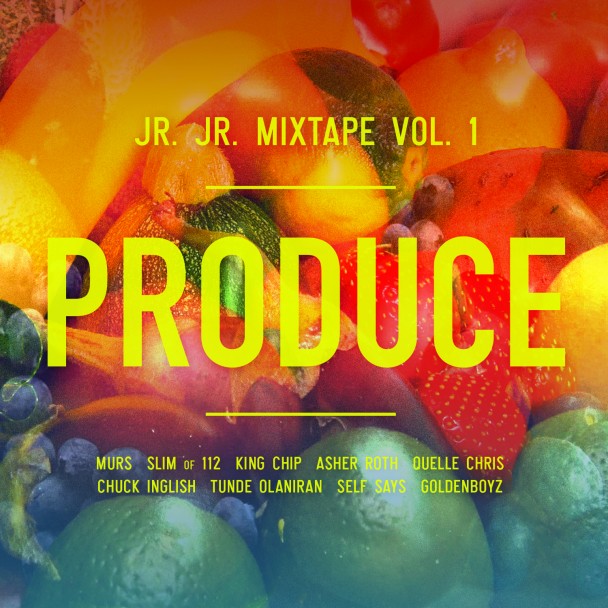 Being ever so unenthusiastic towards “mixtapes” I would not have even bothered obtaining this sort of album had it not been from the creator’s of my favorite album of 2013, Dale Earnhardt Jr. Jr.  Seeing the list of featured artists, my wariness increased as the hip-hop/rapper influences seemed to take precedence over the bulk of the album.  But hey, these dudes (if any) deserve a shot at taking on another musical outlet after having pumped out Speed of Things.

What a great choice that was (pats self on back).  Without even going to deep into it, aka washing the dishes and getting lunches ready for the week, the tracks just roll through in such relaxed, upbeat waves.  As we are accustomed to with DEJJ, every song sounds different than the other so that each one is unique with its own flavor and vibe.  One listen in and you already have this intense connection.  These tracks have already chosen you because they’re from segments of beloved tunes, like “Me and Julio Down By The Schoolyard” or Beach Boys‘ “I Just Wasn’t Made For These Times,” implemented in such a smooth way so that you can appreciate the additions surrounding the bits and pieces.  Then of course, as you keep things rolling on repeat, you’re DEJJ’ed into soaking up the catchiness that surrounds the others.

There are quite a few additional vocals besides Josh and Daniel’s delicious harmonies we’re so used to.  It’s not about redoing Speed of Things it’s about stretching out their amazing composition and production hands to dip into more r&b and hip hop ponds and lakes without adhering themselves to this genre.  They let Chuck Inglish, Asher Roth, and Slim from 112 (among others) enter into their carefully orchestrated minds to be the finishing touches on beautifully balanced beats and synth melodies.  There are a few collaborated remixes, some stereotypical DEJJ tracks, and other stricter collaborations featuring one artist with a DEJJ chorus or verse here and there.

The flow throughout is independent, unlike Speed of Things in so many ways,  yet so rich and filled with the qualities of a great time through exceptionally well done good music, that you know you are absolutely listening to Dale Earnhardt Jr. Jr. even if it doesn’t exactly sound like what you’re used to.  These boys are extremely talented and have done some bridgework towards the hip hop and r&b extremities we were hearing sparks of in their music.  And on some of these tracks you’re getting the beats and song segments from, let’s say, “Hands Across The Water,” and you can pick out a note or key you’ve heard DEJJ include in their albums before and you smile to yourself because you sincerely love these guys.

So, for a free mixtape Dale Earnhardt Jr. Jr. has been working on with a handful of talented non-indie rock artists with sweet beats and catchy melodies, I’m going to say you probably shouldn’t miss out on this opportunity.  Even ignoring the word “free” and just feeling the scratching desire to have another DEJJ production, it certainly will succumb your ambitious cravings.