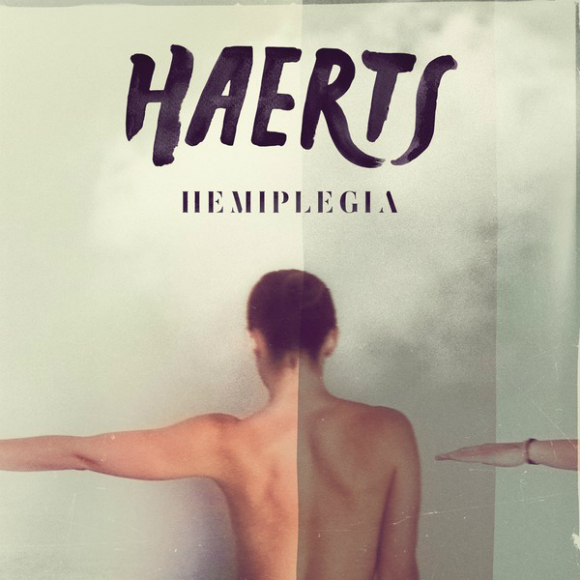 After long hours of iPod use at work, I decided to let the radio decide my musical fate during my commute home.  I was lucky enough to wind up on a “Twelve Cuts Above The Rest” segment on my local “Alt Rock” station.  The fan’s picks for top twelve songs were interesting for a few different reasons, but the main one being that many of the tunes sounded very similar, very.  There were three songs back to back that were all electro with male falsetto vocals and monotonous melodies and beats.  Yes, they were upbeat, but nothing caught my attention, especially since I felt like I just heard the same sound.  Was it just the genre that I was getting bored with?  Is there now such an overload that I’ve moved on altogether and will ignore any synthy-keys?

Ironically, I received HAERTS EP and was confronted with a female take on electro rock.   Though Nini Fabi’s vocal melodies lack a huge variety between songs, they really are naturally seductive, completely revealing throughout.  The instrumentation also allows itself adequate movement from song to song so that you aren’t stifled with over-monotony.   The other tracks are more ambient and dreamy than the single “Wings” toe-tapping twang.  Even in their high octave range they do posses rowdiness, though it’s casted in a thicker and darker atmosphere.  Feeling like you’re amongst friends in a tiny black-lit room, smelling of a fruit flavored smoke machine that accents the glow-in-the-dark stars all while it’s daylight outside of this mesmerizing fortitude.  Take 2:09 of “Hemiplegia,” (the ep is also titled Hermi a direct reflection of this current scenario.

Fabi’s effortless spilling of her emotions sink to the bottom of your heart, causing your breath to skip, realizing only after your following inhale is deeper than previously had been. Snuggling up seamlessly to handfuls of precisely poignant instrumentation slinks by Fabi’s deep and lethargic voice.  A little Stevie Nicks’ accents her eclectic tonality, something you don’t hear often enough.  The popular indie females tend to be traveling in the falsetto range with quiet, wispy tendencies.  Lucky for us, Fabi’s a welcoming sound for sore ears with how easily she sails throughout the EP.

Before I ever heard of HAERTS I was sent the official video “Wings.”  Just to show how two people take in something in different ways; I responded, “Wow, that is such a great concept, I love this video!” and Matt shared, “I didn’t really watch the video, I just fell in love with the song.” It is such a professionally realistic video with deep emotion attached that I was instantly pulled into the story line.  However, now as I watch, I am also agreeing that the song is absolutely fantastic.  I equally appreciate the notion that the videographer ends up floating away in the end.  Now, speaking of differences, HAERTS really switched things up with their latest video for “All the Days.”  I acknowledge the idea of not using your typical young, gorgeous dancers, but using every day, older generation dancers just makes me more depressed than anything.  Is this not a Saturday night at a dive bar and you realize that you need to go somewhere else where there are not “drunk old people dancing”?  Yes, I’m being very cynical, so let’s just say, their former video was much more gripping than their latter.

Haerts EP Hemiplegia is out September 17th on Columbia Records.