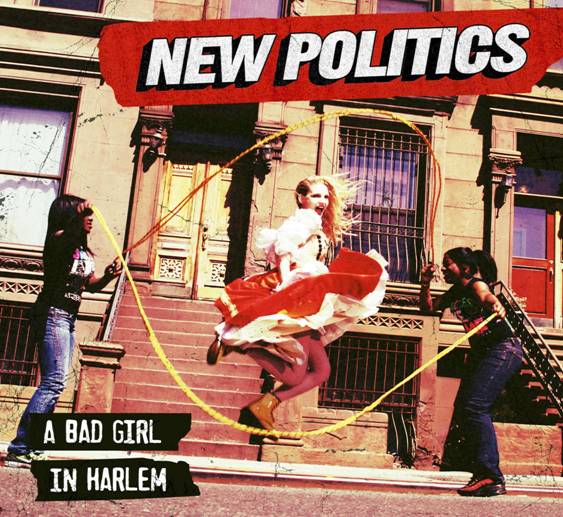 Lately the music circulating has been hugely sophisticated in sound and boldly anticipated by the masses.  In creeps New Politics latest album, which for diehard fans has also been anticipated, yet not sneak peak at Coachella-worthy.  Rattling the right gears for a brilliantly explosive summer soundtrack, these two thirds Danish and one third American lads have all the right elements included in their sophomore release.    Energy and volume skyrocketing with pop beats and melodies qualifies tracks in an all-around feel good masterpiece.

The bundle of tracks are addicting, each dipping into mixed genres such as All-American Rejects’esque ballads (“Stuck on You”), or the more rocker heavy “Die Together,” the pop-punk “Berlin,” and the classic New Politics sound in “Goodbye Copenhagen.”  Vocal melodies and transitions outdo one another quicker than a Kardashian as your spirits are lifted by the shy synth sneaking in and out making a name for itself without overstepping the slick guitar riffs and piano melodies.

A Bad Girl In Harlem is one of those albums that you can be playing, talking about, or singing anywhere and the general public (minus the goth in the trenchcoat), will follow and rock out alongside you.  These gents know how to create singles, of course the first two tracks “Tonight You’re Perfect” and “Harlem” are actual singles, but as you’re taken through the rest of the eight tunes, you realize that everyone of these could be blasted on the radio and sung by many; from ten year olds at summer camp to soccer moms..okay wait, those two have the same taste in music, but you know what I mean.

Not only are they packing catchy melodies, they perfect them with these powerhouse transitions.  When I sat down with New Politics amongst barbequed delicacies in a family owned restaurant, they shared their love for heavier rock as well Rihanna.  How evident it is in their finished product that the intensity and meticulous instrumentation of heavy metal is softened and smeared with upbeat happy-go-lucky attitudes and short and sweet vocals.  The assimilation of these areas of musical mindsets forms one irresistible track after another.

The general theme is about being single and living life in the present (I think the phrase “YOLO” would work here?), and everything fits this need get above your previous sorrows so that you can let loose, be reckless, and try something new and a little out of control.  It will be a nice addition to have lead singer, David Boyd, spin around in break dancing antics or implementing headstands into his performance supporting their album’s push for starting anew with a freed mindset.  Though some tracks are flavored with the notion of being faced with hardships (“Die Together,” “Overcome”) it’s handled in the aftermath with a positive vibe or even an outlook to never make you feel that this hopeless; even if it’s stated, it’s retracted with “I will follow my dreams because I know I will win.”

This little number will be my feel good, welcome to the summer album, ready to go at a moment’s notice, such as an impulsive decision to head to the beach…to then get burnt, because you forget sunblock when you make impulsive decisions.  Gearing up to see them perform at WBRU’s Free Summer Concert Series on Friday will be among other driving forces to keep A Bad Girl In Harlem on repeat all week.