Catching Up with Chloe Chaidez of Kitten 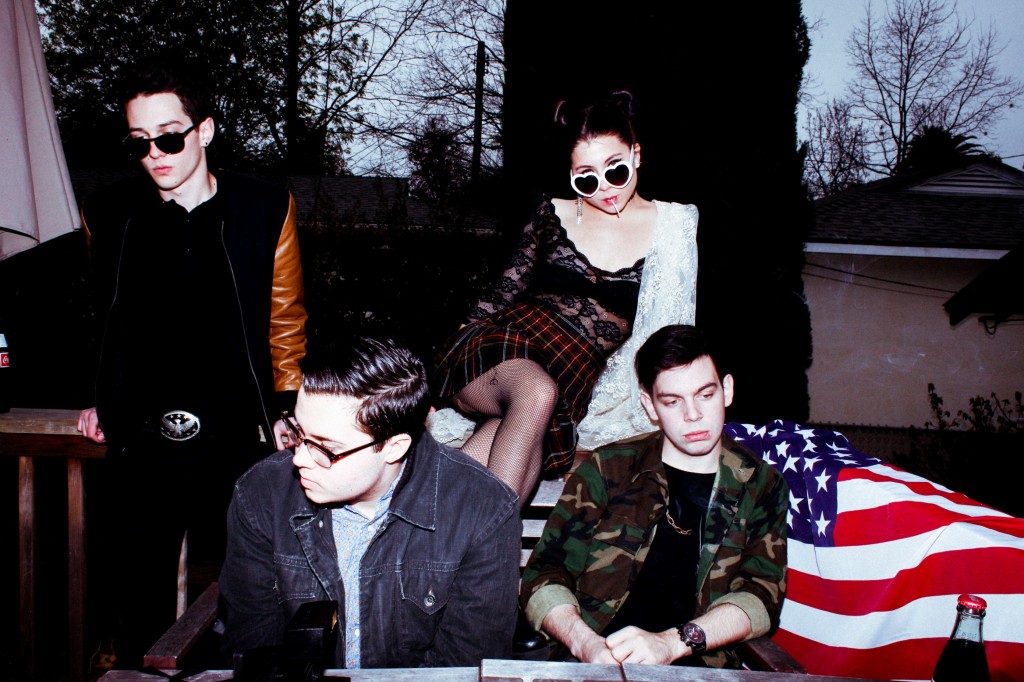 Interview by Aurora Cowen with Chloe Chaidez of Kitten

As soon as we heard G#, a track from the ep Cut It Out and saw the video, we knew that we had found a gem in Kitten and have been following the rising stars ever since, featuring them in an Up Next back in November and sharing our concert experiences in reviews these past few months.  The true talent of these young LA natives resides not only in songwriting, but also in their high energy, cohesive and passionate live performance.  Their characteristic 80’s infused pop rock sound is seamless and the magnetism between band members and audience is infallible; Chloe Chaidez as the obvious main attraction, and the boys who back her up holding their own as a powerhouse of sound and entertainment.  I took a few minutes to get to know Chloe a little better and found that she is, in fact, one of the most humble and lovely young ladies I’ve had the opportunity to chat with, despite the fact that she is traveling the country playing her original music in front of thousands of intrigued concert-goers on the regular…and she’s only 18!

Where did the name Kitten come from?

CC:  I just thought it sounded very classic, retro.  I came up with it when I was 14.  I thought it was something I could grow into, very classic like Blondie or something.

Your gymnastics background really shines in your live performance – you’re doing handstands, jumping off of monitors and flailing yourself all over the stage.  When was the transition for you, moving away from full time gymnast to rock star?

CC: I was a very competitive gymnast.  I would drive home from the park, and it was a long ride home.  It wasn’t an optional thing if you wanted to compete and I think it become more of a job and on the drive I would be thinking about records and singing along and I started to get more excited about the ride home, listening to records with my dad.  I was bored after that.  But then I did track and went to the nationals and did all of these things but no matter what activity I did, I would find myself thinking about music, like going over Cat Power lyrics or whatever, you know?  Oh! And then what happened was I started making music with this dude in 8th grade.  I think he might have had a crush on me.  I sort of had a crush on him, we won’t talk about the though.  (oops :))  Anyway, we started making music together and that was when I decided to totally go for it.

What new artists or current records have you been listening to that you really enjoy?

Speaking of Grimes, I love that you both completely embody and express yourselves through your art on stage without care as far as who is watching and what they think.  You both have a genuine sweetness and innocence about you and at the same time you’re badass, sexy and wild.  With that, you’ve become a role model for young, often times rebellious, girls (and boys, for that matter).  You’re a symbol for fashion trends, freedom and really letting go of restricting factors that tend to hold people back from truly expressing themselves.  Are you aware of this role that you have obtained and what are your thoughts on this growing power?

CC: I don’t know, until I’m selling out the Staples Center I don’t think I can really answer that properly.  I see people who come to more than one show and I think that they in some way look up to me, you know?  I think there’s definitely a responsibility that comes along with being in a position of power, you just have to respect that position, understand what it is and not let the pressure of it hinder your creativity.

You wrote “Christina,” one of my favorite songs from the ep, about Christina Ricci.  I am also a fan of the movie star, so I’m curious as to what inspired the song.

CC: I watched Buffalo 66, I don’t know if you’ve seen it, it’s a great movie.  Something about her suck with me in a unique way.  She was a very odd love interest visually and emotionally and that was very compelling to me at the time.  A little bit chubby and this very real girl body with an adorable face.  All of these things just spoke to me and I wrote the song.

Do you know if she has heard it and if so, do you think she likes you just the same?

CC: I don’t know, she probably hasn’t heard the song.  I’m sure she’d like me more.  I mean, I would like me more if I wrote a song about me.

Many artists connect to a particular movement, charity, or idealism. For example, fun. boldly announced their backing of equal rights for LGBT’s, Say Anything breathes their vision of anarchy, and The Rocket Summer has a religious background influencing their music.  Have you found yourself committing to any specific political or social standpoints?

CC: I like science and politics but I just leave that to the people who really know it, like I know music, you know?  And also I think if you have an opinion, there’s subtle ways to put that in your music without shoving it down people’s throats.

What dead rock star would you most like to collaborate with?

TAGS: adventurous weekend, tornados, cancelled flights, lost phone, stiff neck from head banging to System of a Down, love the midwest, back to SoCal