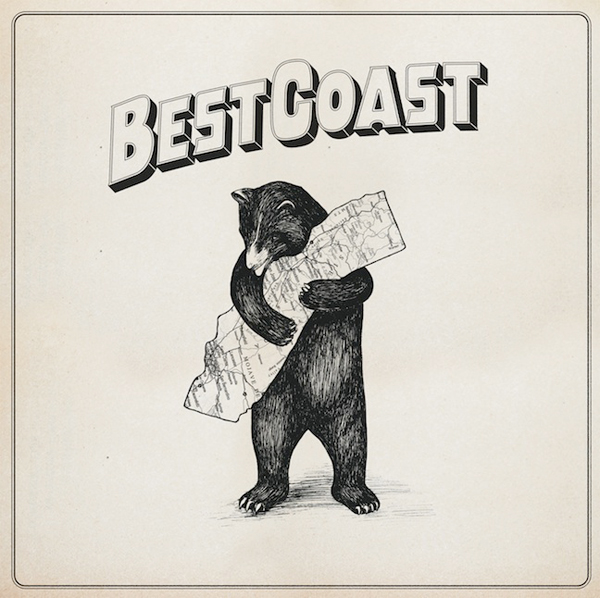 Bethany Cosentino and Bobb Bruno are magicians of sorts. How many 60’s-style surf pop and 60’s female singer vocals have been heard since it began in 1960? A lot. Though the songs I’m listening to on The Only Place are placed in these overflowing categories, they are the ones I am noticing enough to praise.

Taking a genre that has been done so many times is difficult when trying to make it your own. Best Coast is able to place a firm footprint on this genre through a few factors. The first is vocals. Cosentino has “average” vocals, they aren’t unique, but they do compliment the 60’s genre by being strong when necessary and pleasing to the ears. She never does anything crazy, screaming or going into falsetto, but maintains a confident and “pretty” voice.

The next factor is how the music and vocals work together in such a unified motion through the verses, choruses, and bridges. Back and forth they play off each other and use one another to get to the next part of the song. Cosentino lengthens notes on many tracks (“Dreaming My Life Away”) which adds this other level, melding the two pieces perfectly.

There is then a separation from the 60’s chic pop with slight differentiations that are just enough to make Best Coast feel modern. The trailing off is in the moments where the guitar becomes a bit grungier (“Let’s Go Home,” “Last Year”) and you can picture a “That Thing You Do” moment where Bobb Bruno uses distortion for the first time and the audience freezes for a moment, looking at each other in confusion, then a diehard fan starts rocking out to it and everyone follows. Tiny bits of distortion, heavier guitar and drums make appealing appearances throughout the album. Another variation is the composition. Typically upbeat songs are used for when one feels happy, joyful, in love, etc., which means the slower songs were left for heartache and sense of loss. Best Coast says “screw this” and decides to switch things up. The Only Place is about half and half with slower songs and faster ones. Yes, I know a lot of bands do this, have done this, will do this, but with the genre feeling so close to something you would hear in 1963, it is important to note. The theme itself is pretty depressing, most songs are about losing someone and feeling lost. So when these emotional lyrics are being shared through Cosentino’s head bopping surfer melodies, we are quietly reminded the album was released this year.

Now that I have told you how and why, I can finally share the when and where. To put it blankly, Best Coast is the end of Spring/early Summer album of the year. Blasting this album with the sun shining brightly is a full dose of summertime. Not every song is bouncy, but frankly it doesn’t matter because there is such a powerful essence to each song with Cosentino many times creating the movement in her vocals. The summertime feel comes with forcing to finally let out your emotions regardless of what others think. It possess the sentiment of demanding to let your hair down and with a title song like “The Only Place,” there’s no reason to further convince you when Cosentino does it herself, “so leave your coat behind, we’re gonna make it to the beach on time…yeah leave the cold behind, we’re gonna make it to the beach on time.” Yes, Best Coast, I will leave the cold and impatiently anticipate the sand between my toes and The Only Place in my ears.