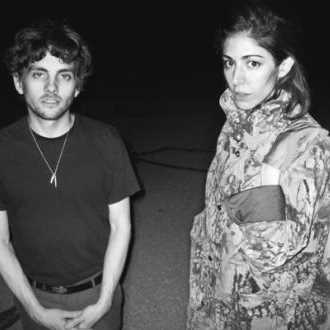 You most probably first heard “Chairlift” when their song “Bruises” was in the Apple t.v. commercial for its 2008 iPod Nano.  After a founding member change, a major label signing and a few years they are set to release their second full length, and third album altogether titled “Something“.  The sounds are quite similar yet a different kind of warm.  I’m wondering how much influence Columbia Records had on final song selection.

The band was infamously started as a two piece starring Caroline Polachek and Aaron Pfenning as a means to make background music for haunted houses.  They added bass player Kyle McCabe, and recorded their debut EP “Daylight Savings” in Los Angeles in 2006.  Enter producer and multi-instrumentalist Patrick Wimberley.  In spring of 2007, they relocated to Brooklyn, signed to wonder-label Kanine Records (Grizzly Bear, Royal Baths, Surfer Blood and ZAMBRI to name a few) and began recording “Does You Inspire You“.  In 2010, Pfenning, left the band to pursue his solo career.

Here is a juicy and melodic track off Something called “Sidewalk Safari”.

Check it out then go buy “Something” already…