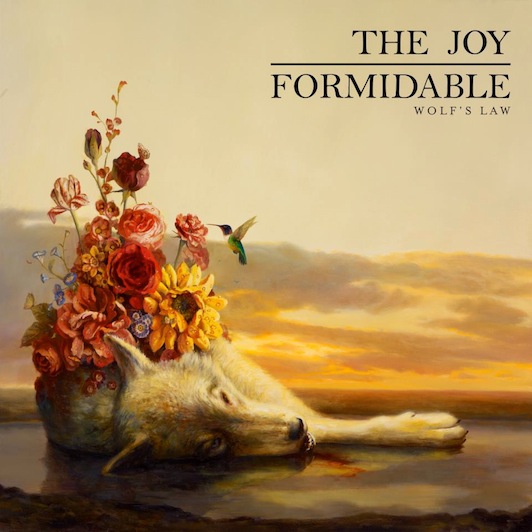 Wolf’s Law hits you like it was the last album ever made.  Paralyzing your thoughts so that you’re only allowed to process the plethora of guitar deviations, intoxicating drum solos, and Ritzy’s dominating and splendidly delicious vocals.  As if, they knew a secret that our world was coming to an end, and instead of broadcasting the sadness, their knowledge of a new beginning was leading an anthem to a closing of one livelihood and an opening of another.   The confidence in nature running its course and casting fear aside, without transferring it to anger, but rather screaming in hope, one solo after another.  This philosophical view is heard in their lyrics, with additional support by the three music videos.  The windstorm effect Wolf’s Law has had allows you to circumstantially feel as if your life is a part of an ending as much as it is taking a step into a future where anything could happen.

The high volume of energy, where tracks are completely filled with solos of all kinds in the most natural way, is outstanding and breathtaking.   As one guitar is shattering riffs, another one is set in a heavy distortion continuing a more raw melody and then, to your blessed ears, another guitar adds in a solo…are you freaking kidding me?  So epic is the “Maw Maw Song” that you salivate with the ferocious nature of rock.  While Ritzy and Rhydian are in control of the guitars, Matt Thomas takes on the percussion and drums.  Wolf’s Law has its share of smashing drum solos and graciously talented moments thickened throughout.  Some orchestration and numerous pedal sounds are also found on the album, naturally causing a heightened feeling of urgency and power.

“Cholla” was released as their first single (besides the fan-base download of “Wolf’s Law”) and reigns an appropriate centerpiece that Wolf’s Law displays tactfully.   After watching the music video, my curiosity of the definition of “cholla” peaked.  Finding an article online stating a connection with an untrained painting horse named Cholla and correlating this to the idea of our futures’ being unknown (based upon a caption in The Joy Formidable’s music video) – where I further can take this to our world being a mystery and how nothing is for certain, appreciating miraculous oddities and our personal future being for you to envision and guide your life towards.  To make this horse idea seem more plausible, I dipped into the lyrics where “you rush to the future and paint it yourself,” could work.  I was a tad unsatisfied and stumbled upon a jumping cholla cactus whose needles will literally “jump” onto anything that brushes past it, to which they stay quite intact.  This also finds its way into “Cholla,” “How do we move on when nothing is growing, your hands turned to daggers again” – may be a bit more subtle.  You can research for yourself or chose whichever makes more sense as you ingest the emotional ascension through fluid guitar melodies and precise moments where a brief pause allows you to take deep breath before being catapulted back into ferocity.

Even the most miniscule sound holds such a firm grip on the track, where transitions and bridges have a less obvious effect.  Not that they are less than monumental, but more that the rest of the track is built to such a high capacity, you’re not waiting for “the moment” to be satisfied – you’re satisfied the entire time.  My favorite songs are all of the songs, as much as I could make a case for “The Leopard and the Lung,” I then am sent into a state of epic hysteria with the beat and dirty guitar riffs intro’ing “Little Blimp,” to only be blasted with the lighter side of things (I suppose) with “The Hurdle.”  Of course, I then have *Matt reinforcing the wonder of 70’s ABBA feel in “The Turnaround” to leave me exhausted, confused, and completely in love.  You will find something in Wolf’s Law that will touch upon you emotionally, philosophically, or at least leave you physically worn out (air guitar, table drums).   It’s an album that sends you into yourself, looking at your life and gathering feelings, even if you don’t want to be or realize you are.