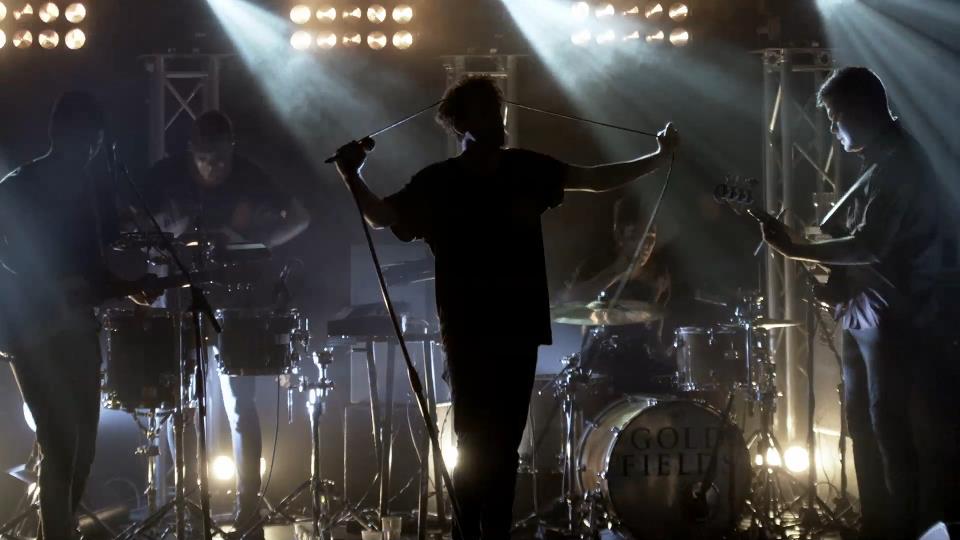 Walking in from the drizzle of early May showers into a scene that transported me into a darkened European bar where leather jackets greeted me with crisp synth, tight vocals, and sick beats.  A dainty mix between Calvin Harris and maybe Walk The Moon, Lovelife was an excellent way to begin the evening and a precursor to the night’s finale.

Being acquainted with Gold Fields‘ Black Sun I had set expectations of a relaxed, easy-going evening where swaying was probable.  Yet, I was hinted at the idea that things may get a bit more intense than expected, so I threw on my only pair of bright blue pants – suggested my roommate do the same, and together in our florescent attire we found ourselves to be the only ones.  Giving one another assured looks upon Lovelife’s  credible dance beats, we prided our outfit choice and welcomed the gents from Australia.

Two words.  Percussion and Energy.  These were the swirling, deafening factors that encompassed the drippingly entertaining performance Gold Fields reveled in.  All members were building a connection with the highly impressed crowd through their instrumentation, while seemingly keeping things all to themselves.  They knew they would be able to draw you in with the masterpieces that were combined between the five and did so confidently and humbly.  Between the drummer and keyboard, cowbell, percussion extraordinaire – there was no turning away, all of your intent focus was on the way your body was reacting to the beats presented before you.  With lead singer, Mark Robert Fuller, portraying your feelings simultaneously on stage, the venue was either too focused to move or too moved to focus.  I was both.  Allowing every beat, every synth note, and vocal to take over I was moving until finding myself unable to.

At the peak of their conclusion, Fuller lost his balance in a swirling outpouring of inspiration, completing the set lying flat on his back.  As the last chord silenced, Fuller shared “I knew that was going to happen” with a smirk on his face.  Before they began playing I had one word for them “adorable,” when they finished I now had “adorably epic” classified next to their live show.  Realizing what they offered cannot come across as elegantly on a record, it will be my undying pleasure to forever see them live.

Capital Cities is unable to be explained live.  If I say 80’s dance, you would have an image in your head that is incorrect.  If I were to say trumpet playing synth dance music.  Again, you would have something entirely different in mind.  They are both, their dry humor left my fellow outrageous pants wearer and myself chuckling through most of the performance.  Sebu Simonian’s Steve Carell characteristics and dictated “Holiday” cover to which he pronounced every syllable was missed by most as they were letting loose in Madonna‘s rapture, which is too bad because it was hysterical.  Spencer Ludwig was an instant favorite as he handled the trumpet as a confident dance partner, making himself the center of attention at the perfect moments, never over stepping the choreographed team of Simonian and Ryan Merchant.  The night ended with Merchant in the crowd creating a dance party to their catchy “Safe and Sound” while being swarmed upon by flirtatious women (to which I had my feet stomped on quite a few times).

With Gold Fields running off to their next performance in New York before I could shed my appreciation and well wishes, we left still a bit sweaty and welcomed the continued misty atmosphere that joined our long walk back to the car.