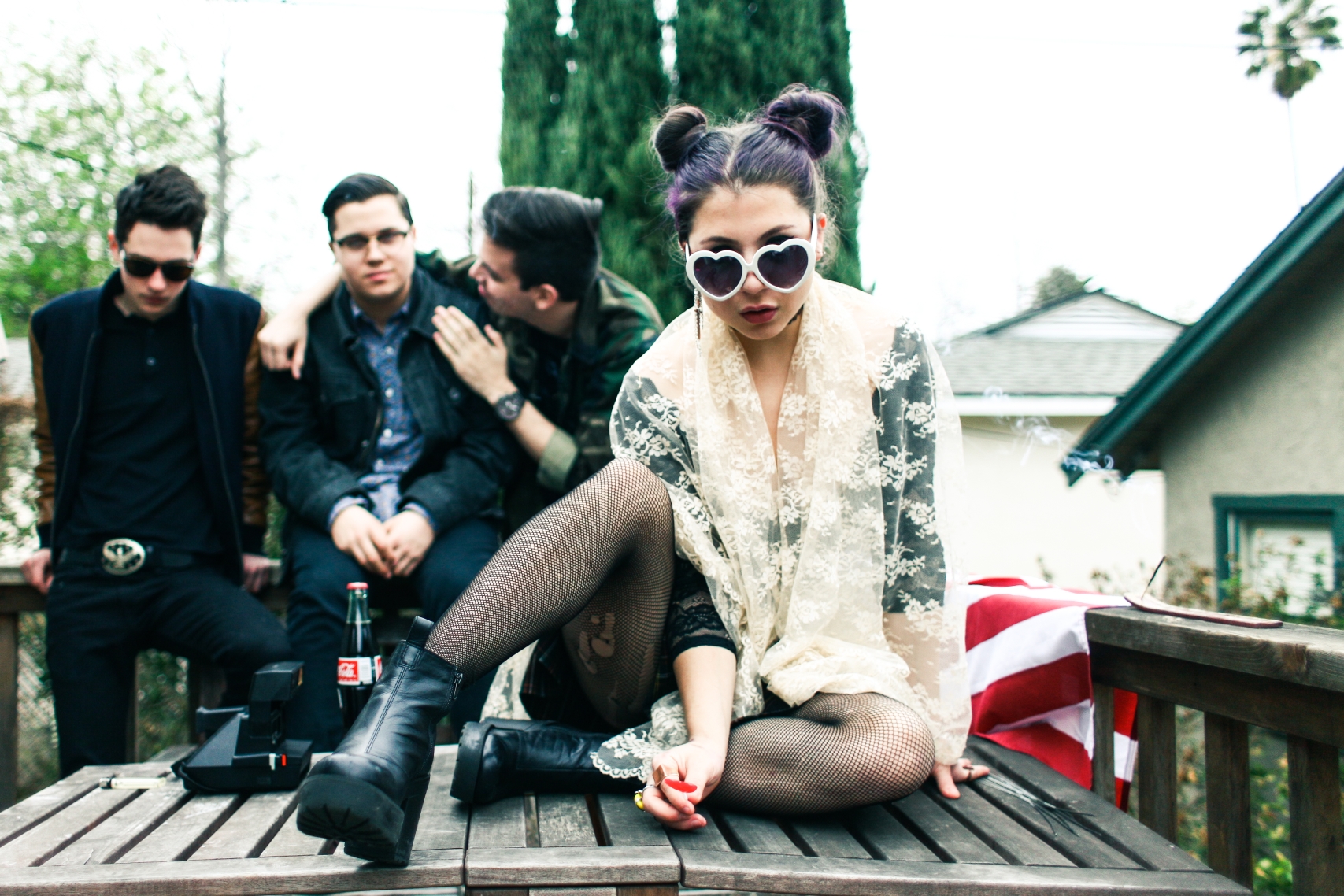 Goddammit KITTEN you had me at the first synth drop of “Japanese Eyes.”  Those lads (Lukas Frank, Bryan DeLeon, Waylon Rector, Zach Bilson) took the audience by storm with their tight powerhouse sound sending a highly professional and extremely talented jolt flooding over the crowd.  The intoxicating intro placed a blanket of professionalism in the atmosphere, in every corner of the venue alerting the entire audience that something magical was about to take place.

Then she appeared, whether you knew what was about to take place, or you were ignorant, you could feel that she was going to be a fascinating factor in this oxymoronic ‘opening’ band.

Chloe Chaidez ran on stage, never ceasing to thrust, jump, mash, catapult, or allow effortless notes to stream from her lungs until the amps were unplugged 45 minutes later.  Heads whipped back and forth across the stage following her every twitch or leap.   Illegally sitting on top of the railing so I wouldn’t miss a thing, I was among those captivated by this event that was before us.  Witnessing something special and never given a moment to let the idea crawl through our minds we were just following, back and forth, back and forth.  Yet, it wasn’t just scrutinizing to see what Chaidez would do next, there were a plethora of factors that held our breaths and strained our necks.

Conscious of what other’s would say – not a factor.  Worried about slipping and falling due to erratic movements – unimportant.  Concern for ‘looking pretty’ while carrying about – never a thought.  Inhaling delicious melodies, radical solos, and lyric themes to then exhale them through every pulse and extremity of her body – the only thing that mattered.  Through Chaidez’s reaction to the music she not only partook in composing, but is then experiencing growing into a reality around her, we then were engulfed by the swarm of emotions.  As a response we watched and soaked in everything about the moment we could.  Back and forth our heads turning, our senses being drowned.

As those who go into sweat lodges have different hallucinogen or lack their of experiences, I feel that at shows when both flawless instrumentation and liberated vocalists combine, the audience is sure to have an experience of sorts.

Weightlessness soared me everywhere and nowhere at all as Chloe belted “Sugar.”  My translucent figure was persuaded to evolve into Chaidez’s exterior carefree lifestyle where responsibilities and sadness were removed as the present moment hung longer in time than ever before.  I was held a welcomed captive to the ideology of freedom.  Regrettably snapping back to reality with the leap from the double stacked amps, I found myself able to cozy up to those feelings again before she flung into the crowd, but never again with the same intensity as with “Sugar.”

KITTEN’s electro rock pop with a concrete background in 80’s pop was done to a level of perfection.  Putting in effort as if they were the only ones on stage with their own personalities shining through, the four musicians played their hearts out.  Though Chaidez was sending chills and anticipation throughout the crowd – the quartet never relaxed to let her gain all the focus.  Jumping higher, dancing more choreographically, head mashing longer, silently taking her nudges and pulls, they all had a part to play amongst performing intricate compositions.

As the last note rung out and Chloe was shoved back on stage by the security guard, who had also taken on a role as a prop, there was a sense of sadness that washed over the crowd.  Not wanting to let the moment go we hung a bit before either getting closer to the stage for Paramore, grabbing drinks, or formulating some sort of kind words of thankfulness to share to the grateful and kind Chloe Chaidez at the merch booth.

You can see kitten on tour this spring & summer here.

You can listen to their ep Cut It Out here.