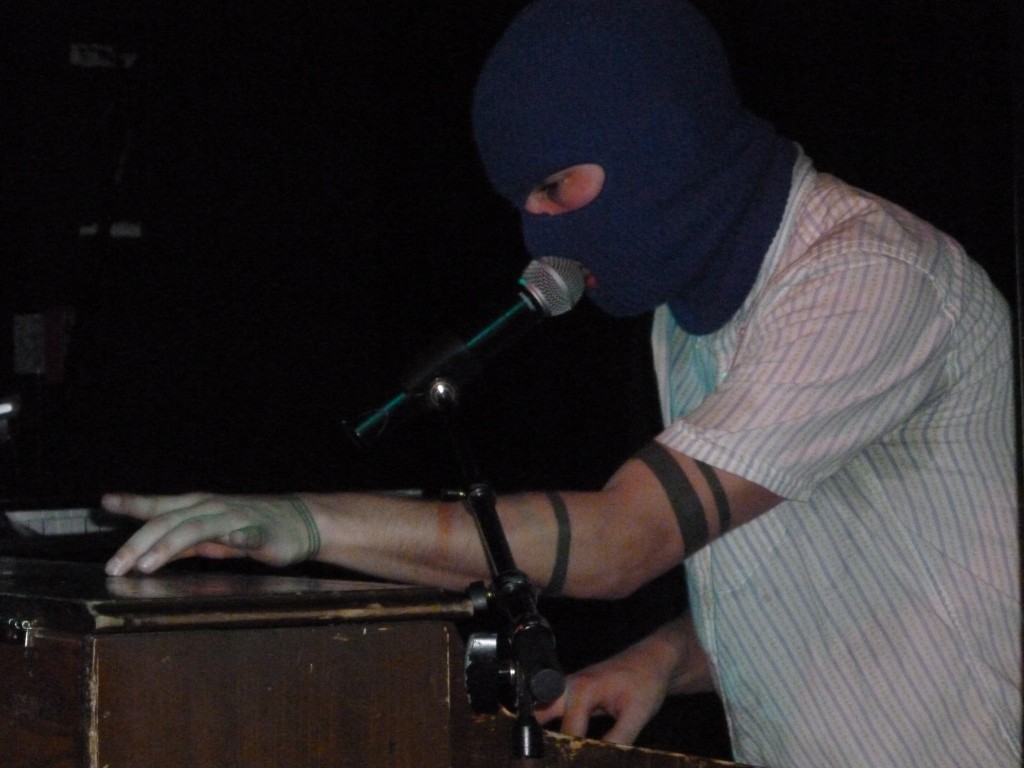 by Charissa Lock concert review from the Met in Pawtucket, RI on January 19th, 2013

If you were trying to guess the concert based on the crowd, you would be about as stumped as I am trying to come up with a cross-genre blend of artists.  Teenyboppers wearing outfits that were better suited for a club that they wouldn’t be able to enter for another 3 years, prepped out college boys, a handful of Manga-involved fan girls, and moms.  The stumping further spreads as New Politics and twenty|one|pilots perform and no one knows what to do with their hands.  Rocker hands, fist pumping, hands clutching to random boys grinding behind them, and hip hop hand waving ricochets throughout the venue.  Why all this confusion?  Well, in my twenty|one|pilots’ album review, I did predict that this album would be enjoyed by a plethora of music lovers.   Many people were there for New Politics, there were other attendees strictly for the hip hop beats and rapping portions, fans of the radio station hosting the event made their presence, then of course there were those, like myself, who have been unable to stop listening to Vessel and needed to soak it all up in a live performance.

The local opening band, Fairhaven, had its fair share of fans and the crowd had already started to thicken by the end of their set list.  With trash can cover cymbals, energy of the intense standard, and band members looking more like you would find them playing wiffle ball on a Saturday night outside of their dorm then you would performing onstage – they were able to handle themselves with upbeat and respectful tunes. 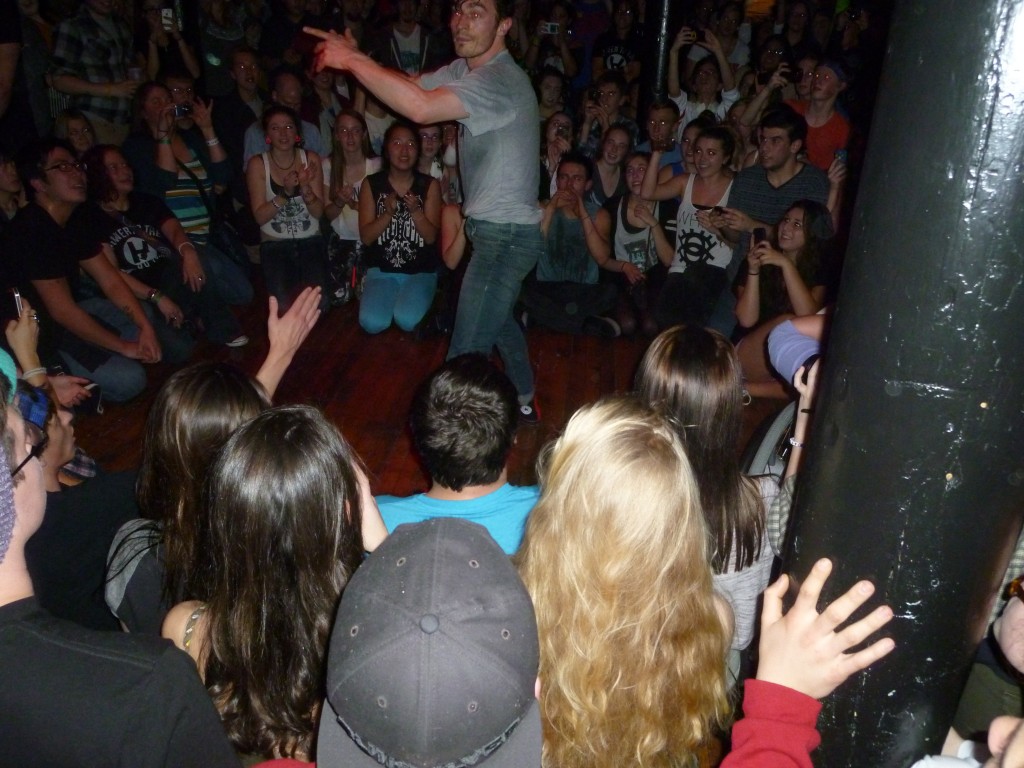 New Politics, a Brooklyn by-way-of Denmark, trio dripped with volume, as disoriented audience members became unsure of how to handle what was happening.   Those in the crowd who knew exactly what was happening rapped and sang along with confident fists to the air.  Their energy was contagious.  Even if you were an unlikely enjoyer of rap (*cough*cough*) you couldn’t help moving and waiting anxiously for what would happen next.  Here’s what happened next…Soren was on the guitar, playing and singing as if it were the last time he would ever be able to, which you don’t typically see artists putting in that much effort.  Luis was slamming on the drums with a huge smile casted on his face while David jumping around and doing headstands, which made my placement in the crowd highly inappropriate as I was stuck behind a pole and a tall hand-waver.

Their older songs and newer pieces were accepted quite nicely among all.  As much as their former material had longer rapping verses, the newer were more instrumentally technical.  Sharing with me before the show (check out our interview with New Politics here) that they would be performing more older than newer since people coming to see them wanted to hear what they went there for.  As much as I appreciated that view for a tour that is taking place before their album is released, I bet their fans were just as pleased.  Highlights were, of course, the breakdancing and two notable singles.   By breakdancing, I mean David directing the crowd to form an open circle (after so kindly asking people to sit, in which I could see for the first time since the show began) then jumping into the crowd to perform a breakdancing routine.  Everyone, and I mean everyone was impressed – including the high school boys standing nearby that were a little unsure of the band at the beginning.  Assuming there would be a lot of singing along with their newest single “Harlem,” I was proven accurate as it became so much more effective on stage.   The crowd went a little crazy, but nothing compared to “Yeah Yeah Yeah.”  The venue went nuts, people were crashing into one another, not in a mashing way, but in a…the whole audience was moving so it was inevitable that someone would bump into someone else way.  As their set ended, people were sweaty and exhausted, sharing “At first I was kinda’ nervous, but they were really good,” and dissipating from the core.   Though no one was more happy than the Milton (“Office Space” stapler gentleman) look-alike who knew every word to every song and was in a musical rapture, reminding me how music can connect to anyone and everyone. 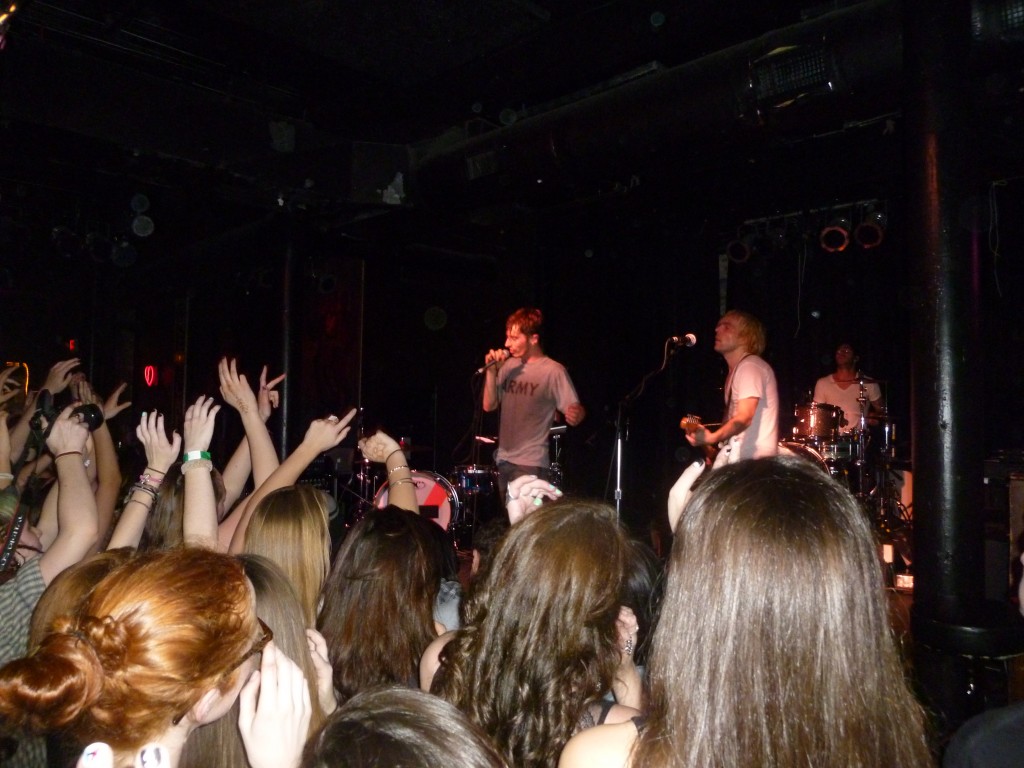 Feeling relief in this wave of cool air, I looked around me and realized that a large portion of the crowd had left and, besides being able to move away from the damn pole, I realized that New Politics brought a bulk of the fans and was a bit nervous for twenty|one|pilots.

A strange mix of audience members surrounded the stage as roadies were tuning and testing the few instruments of the Ohio duo twenty|one|pilots (TOP).  Having performed in the area in the fall opening for Walk The Moon and Neon Trees, and with their single “Holding On To You” being broadcasted on the radio station hosting this show, there were a chunk of people waiting impatiently.   Though many had separated from the epicenter of the floor at the closure of New Politics, there was still a decent amount of young girls, angsty college kids, and a handful of ‘adults.’ 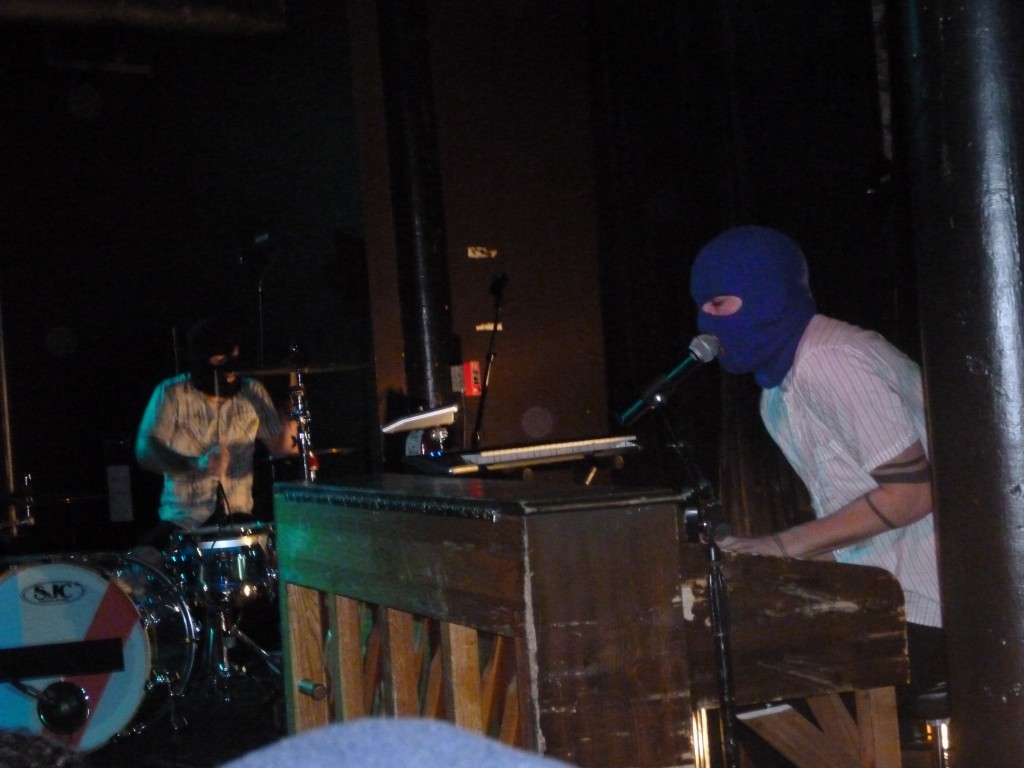 After having seen them, I knew that the ski masks would be worn, and Tyler would be putting on an emotional with a tinge of delusion inspired performance, so this time I was prepared to enjoy it instead of trying to make sense of it.

The lights dimmed, the crowd started screaming (when girls squeal it always sounds like you’re at a boy band concert), and the strobe-light programmed beginning of “Ode To Sleep” began to play.  Josh came out first, getting the beat started on his drum set.  Moments later, to the colossal cheering of the crowd, Tyler made his way to the stage right on time to his vocal debut.  The second the song transitions to a brighter tune, you automatically knew that this show was going to be one you were not going to easily forget.

Those who knew the words were singing along, and though both lads had their masks on, the audience made no scrutinizing reactions and erupted in any hand movement they were used to producing at a concert, whether Rihanna, Deftones, or Matt and Kim.  It was mind boggling and beautiful at the same time.

Masks were ripped off and “Migraine” had begun, a bit more relaxed and settled, while the crowd could now soak it all up without being bombarded with intensity.  During the show, Tyler would go between the piano (both sitting on the top and sitting on the bench to play) and the middle of the stage (playing the ukulele during ukulele specific moments or the keyboard).  It never looked disorganized, nor did you feel tired for his relocation movements, it was perfectly timed and confident.  You did feel bad that the venue was about 90 degrees and between a few songs he would comment on the heat in a laughing matter before sharing his appreciation for everything, especially for everyone being there at that moment in time with him.   He seemed much more personable on stage at this venue than the other (which was a good amount smaller than the last I saw them at) and his kind and humble personality made you that much more appreciative of also being there with him at that moment in time. 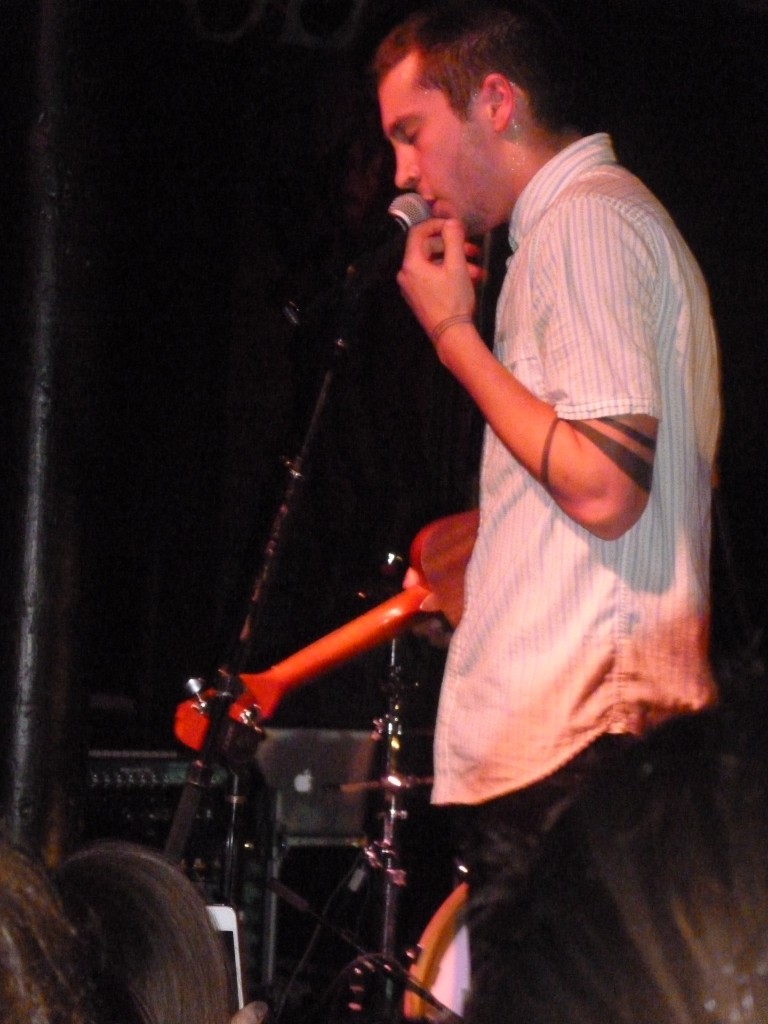 He and Josh gave 150% and every drum beat, key, and vocal note was snowballed with the music itself, the melodies, the transitions, the amazing bridges.  Playing all, but two, songs off of Vessel, and not even touching upon any of their older stuff, your favorite song would most likely be played from their newest album.   With every track posing a certain element that you can appreciate, the entire show was extraordinary and you were never bored or just waiting for their single to be played.   At one point during “Screen” he had the audience singing along at the bridge “We’re broken, we’re broken.  We’re broken people, we’re broken people….yeah,” which is such a big moment in that song that being a part of it made the crowd re-fuel with energy and connection to being in the moment.   “Semi-Automatic” also packed some forced dance moves, ensuring it’s positioning as one of my favorites, most notably at the build and chorus post-bridge.

The colossal ending of “Car Radio” fizzled throughout the audience as TOP went off stage.  Coming back to a satisfied audience with “Trees” was ideal.  The crowd became one giant, passionate being jumping up and down, with the words “Hellooo” pouring from souls as Tyler’s powerful vocals radiated through our veins.  Josh and Tyler took to a drumming duel, wielding large * drumsticks, to apparently make the audience numb with excitement leading up to “Guns For Hands.”  Being their second single, you can imagine the result as this concluded the show.

If you thought you were sweaty and tired after New Politics, you were now feeling as if you were at the end of a five day journey through the Sahara.  Yet this didn’t matter.  New Politics and twenty|one|pilots put on a fantastic performance, one that will be remembered, as well as needing to be repeated as often as possible.   Going to see twenty|one|pilots at a smaller venue is the best choice you could make right now, because frankly, I don’t see them staying at these small, personal shows much longer.  Get to them now while you can because the next time they come around, you will probably be spending a bit more money and definitely have a barricade between you and the stage.