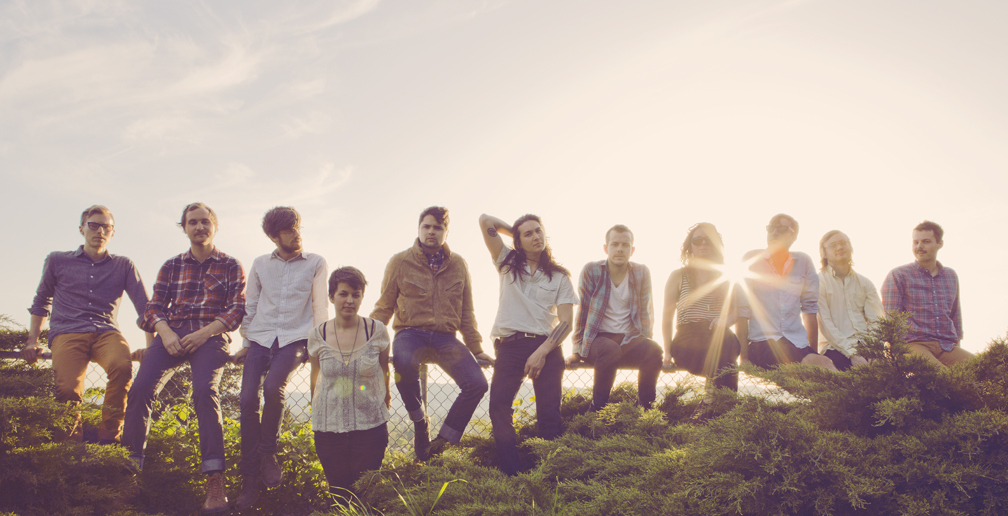 I was expecting nothing less than fabulous entering Brighton Music Hall on the crisp Fall night.  After having been a fan of the plethora of talented musicians for a handful of years, I was quite confident that they were going to send chills down my spine.  With the cloak of strings, two and  a half sets of drums, and horns draped over me for their set, I was not proven wrong.  Yet, the factor that threw me off guard was the other audience members.  Not sure what to expect, especially being the only one I knew who had heard of them, I was thinking there were probably going to be a smaller crowd as opposed to a max capacity one.  This was a mistake.  Though this venue tends to be a smaller, more relaxed setting with wiggle room, on this evening the building was packed.  I kept commenting on how I had never seen it so jammed before, people protecting their spots like they had been waiting there all day and groups allowing themselves a statue position from before the opening act until Typhoon‘s final song (after the encore).

The best part of this was the camaraderie among friends and strangers alike that took on a driving force, releasing itself through the delicate and blunt notes struck by all eleven members of Typhoon.  Smiling between themselves in a humble appreciation for the offering sent from those of us singing and cheering along.  There are so many moments in Typhoon’s music where it calls for passionate and classical group vocals that in a live setting you could actually be apart of.  You became one of the bandmates, singing back up vocals with the creators of this beautiful music, as if there weren’t a stage separating us.  The experience was unforgettable with passion swirling throughout the quietest of moments and darkest, heaviest of emotions.

Performing more of their newer tracks off of White Lighter (read our review here), though dabbling the bunch with older tunes, you were able to live through most songs you were wishing to.   And guess what those angelic creatures did?  They played “Hunger and Thirst” and ever so gently and cautiously entered into “Common Sentiments.”  This was exactly what I had wanted more than anything in the world.  I was in disbelief, “no way…no way,” cheering my heart out, along with half the crowd, before becoming enraptured in the ten minute euphoria.  Could I have been dreaming?  The entire concert experience left you in complete awe, the emotional impact inflicting goosebumps and absolute focus on living in the present.