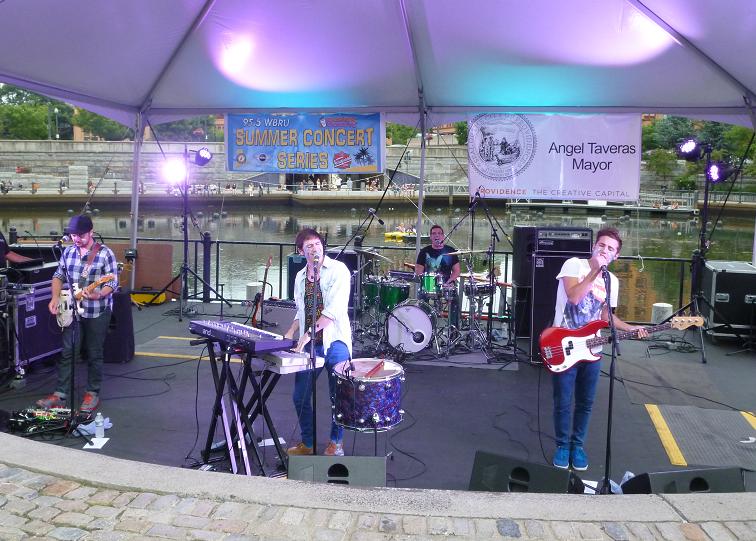 It had been a hot and sticky Friday, with the evening not having much of a decrease in temperature nor humidity. As my friend and I made our way on foot to the outdoor concert shell a local radio station was hosting for WALK THE MOON, we suddenly heard the sultry distorted guitar solo of “Lisa Baby” traveling to our ears. A second of panic passed through me as I thought I had gotten the time wrong, to the reassurance of my friend that it was probably sound check. Indeed it was, and we not only landed front row seats to the sound check, but also the brilliantly energetic and hypnotizing show, and of course the drunk girl using green sharpie for face paint.

Being humble and grateful to their pre-audience, and the intoxicated girl trying to hand beers to them, WALK THE MOON certainly had a very anxious crowd on their hands. Face paint, beaded and tattered shirts, bandana headbands, they were in for something special and I didn’t know what I was getting myself into. I was hoping it wouldn’t be a cult-type show where they weren’t very good live, but because people could wear face paint and be accepted it was the thing to go to. However, I knew that they’re music was catchy, fun, energetic, witty, smart, and professional; I figured my chances were good that this would be at least decent.

I was right. Rolling drums from both drummer, Sean Waugaman and lead singer Nicholas Petricca, bounded throughout the park as “Quesadilla” channeled everyone’s attention to the quartet. Crisp and comparable album vocals were not only produced by Petricca, but as well as surprise hair-raising harmonies and powerful background vocals by bassist Kevin Ray, and guitarist Eli Maiman. Something that can only be experienced live, the dynamic between one another was so fluid and natural for many songs, like hearing a more fabulous version every time.

The energy increased with every song, as Petricca salsa-danced his hips along with the cacophony of brilliant synth melodies and anticipated drum and head banging. It was impossible to be there and not be moving, especially if you have had a whole six-pack of Narragansetts like the girl in front of us. Going back and forth between tracks off their self-titled album released in June and going back to their 2011 release i want! i want!. The crowd grew heavier and hotter as more fans and virgin ears wanted to get closer and closer. The moments of least audience movement came when they began playing their newest, not even recorded yet, songs. Though this was only for a moment and then finding the patterns in the beats face painted girls would be swaying while face painted boys doing the manly head nod. And what was I doing? Standing in complete awe, hardly moving a muscle as I was played absolutely infectious songs. My mouth broke out into a grin about halfway through each, as the thought passed through – “THIS is the amaze-balls (copyright, Matthew Downes) new music I have been itching to experience.”

The slowest track that I had always been “eh” about hit me fast completely throwing me off guard. Resulting in goosebumps and not being able to take my eyes off of the three harmonies – I get quite a different feeling now listening to “Iscariot.” The other two performances that changed my perception were “i want! i want!” and “Blue Dress,” both off of their first album. The revamped versions of each were exceptional, possibly due to the fact I had heard them many times before, but was never a huge fan. Yet, when being played infront of me, I was able to grasp all the hook, riffs, and transitions I seemed to have missed. When you are able to actually hear all these pieces at a live show and not have it all become one fuzzy mess, it shows how fine-tuned the band really is.

Inevitably “Anna Sun” was quite a scene with the addition of the drunken green-faced girl bolting it to the stage and being scooped away by security. Everyone knew the words, throwing their hands up in the air while their face paint had been slowly melting away by sweat and humidity. Closing out the show was “I Can Lift A Car,” my favorite song. Though not as many people knew this (it didn’t have the four years of popularity build “Anna Sun” did), it was a combination of all the emotion, melted face paint, sore feet, and love for WALK THE MOON. We all knew it was the end and none of us wanted it to be over. Giving it all we had was our gratitude and pumping endorphins receiving those simple riffs at the beginning and absolute plethora of heavy beats and synth instrumentation by the end.

Meeting Petricca and Ray was an added bonus, with their humble and friendly demeanor and my certainty of seeing them when they return in August. A phenomenal show and quite an amazing experience that was absolutely free (while certainly not feeling like it).