Cool Thing, You Make The Streets A Wonder! 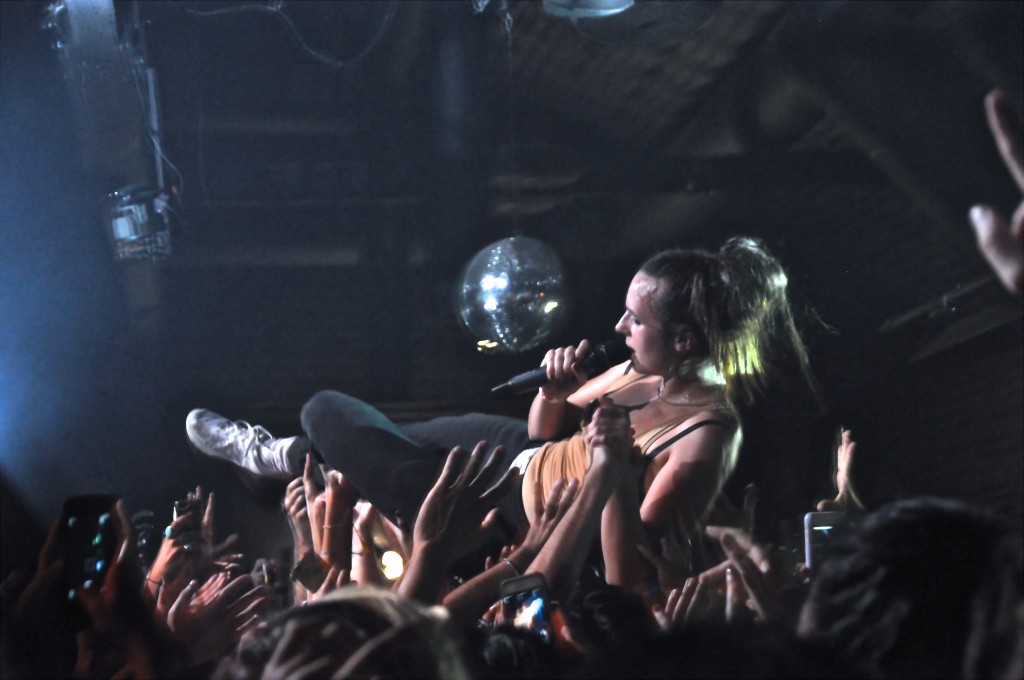 This past Thursday, Oct. 16, marked my seventh year in Los Angeles, and as a self-proclaimed, ‘west-sider for life,’ what better way to shake it up than to head to the opposite side of town? East/West battles aside, I’m always appreciative to get out and experience subculture of any sort. The east side of Los Angeles was once a heavy, crime-centric area, which oddly converted to a trendy, hipster capital. It certainly upholds it’s current reputation, and this night wasn’t shy in the slightest of representatives. Everyone was piling in at the Echoplex to catch rising star, MØ. Naturally, it was a homogenized display of trends, but this time was ode-specific to MØ and her foundation of references to youth culture.

For those unfamiliar, MØ is a Danish badass, with some ridiculously sultry vocals. Being one of the many twenty-something starlet’s currently on the rise, there’s just something different about MØ. Maybe it’s the Euro-flavor she brings to the table, but with talent of that caliber, it was clear from the get-go she was going to bulldoze through any barriers between her and the masses. And like many entertainers of the western world, there’s no shortage of re-appropriation of cultural artifacts. But, MØ somehow maintains subtle delivery, the references are overt, but not shoved in your face with purpose of commentary. Instead, it’s as if she’s never taken her hair out of that scrunchie since the first time she styled it that way… while rocking out to the Spice Girls of course. It’s who she is, it’s apart of her youthful memories connecting her to many of us.

After a lifetime of studying musician biographies, or never missing a Behind The Music episode, naturally I’m waiting for the climax of every narrative. So, when I first discover an artist that is breaking onto the scene, I instantly go into probe mode. What is their story? What led them to this point? Who is behind the production? Who’s writing this? What’s the influences behind their aesthetic? Nowadays, one’s break could damn well be from anything. In the thick of Network Society, the fame myth or notions of what deems the American Dream are now elevated to an entirely new dimension. MØ has a throw back feeling though. Once upon a time it used to be the glory days of flyers and total word of mouth, not mediated communication. MØ’s roots are Euro, underground punk rock, only for her to have evolved into a progressive pop-star. In fact, MØ is a perfect representation of a progressive pop-star, just enough accessibility, just enough acquired taste.

I recall the first time Aurora told me about her. Aurora is the queen of discovering new music and emerging artists. Girlfriend probably watched over 1000 videos last year, and she’s very much in tune with what’s coming, and also what I’m going to dig. She told me about the brand new video of this chick she’d been following for a bit, except this time she came out with a song produced by Diplo. It was filmed in our Venice backyard, and it captured my attention with it’s eccentricities similar to the way Grimes‘ breakthrough video did. Everything about her blew me away. I liked her look too. She stood out. She wasn’t your conventional beauty. She was different and had this positive power about her. This was before her EP, Bikini Daze was even released. Now, a full-album later, we watched MØ jump from 40k likes on Facebook to 200+k in a very short period. And, after seeing her live, there is reason for this madness.

The Echoplex is notorious for late sets, but we were there early to catch the opening act, some talented jam buddies of mine, HOLYCHILD. They’ve been on tour with MØ for the past month. The line was already building, and it makes sense considering HOLYCHILD fits right into the Silverlake scene. They’re a reliable pick with their spunk, catchy hooks, and new songs containing some pretty dope electro-beats. I went to a few shows this past week, all of which had dual drummers, HOLYCHILD being one of them. This worked especially well for their set. The crowd was loving front lady, Liz, and her partner in crime, Louie brought solid musicianship to the table. Holy or not, this is a natural birth, and they’re without a doubt some playful, indie-pop children of Silverlake. De Lux was the mid man, with a sound similar to Talking Heads meets Chris Isaak vocals. There’s a lot of seemingly tropical, sonic elements happening these days, which felt to be the case here. It got us dancing as the crowd thickened deep underneath the club’s incredibly low ceilings.
Ayo!
[youtube]https://www.youtube.com/watch?v=M5uIVBxWZVU[/youtube]

About five till eleven, the lights finally dim and we were greeted by MØ’s drummer, slamming away as the rest of the band joined. Of course everyone went nuts as soon as we were delighted with the presence of the one & only, MØ. The second she opens her mouth, you realize she’s on another level. It was clear after following her that her development was not overnight; however, it does seem like a natural progression. Her evolvement is right on schedule, and the talent smacks you in the face. The songs and the sound are there. Her inherent badass-ness just nicely ties it all up with a big ‘ole scrunchie.

It was just six months ago that we caught MØ at The Troubadour where it was clear that her fire had been lit and was about to take off. With an upcoming SNL debut as a feature on Iggy Izaelea‘s new single, we can say goodbye to the dance party we started with MØ at her after party in LA. Or will we? MØ is one of many that makes cultural references of youth by paying homage to her childhood influences and she definitely banks conceptually off of this, but the thing that feels different when being apart of her audience is the connection. She’s not disconnected from her peers at all. It makes sense that her roots stem back to an underground punk-rock scene in Denmark. She’s just a leader of the riot. And, just as some random chick and I looked at each other nodding in awe, who said, “She just doesn’t know how good she is.” The funny thing is, homegirl loves the camera. She is almost glued to the front of the stage, preferring to be near the front-goers, and in need of the exchange of warmth. In true Leo fashion, she’s a smooth sailing star, and she does her damn thing. And, of course, what always remains to be of the upmost importance: the music is awesome. 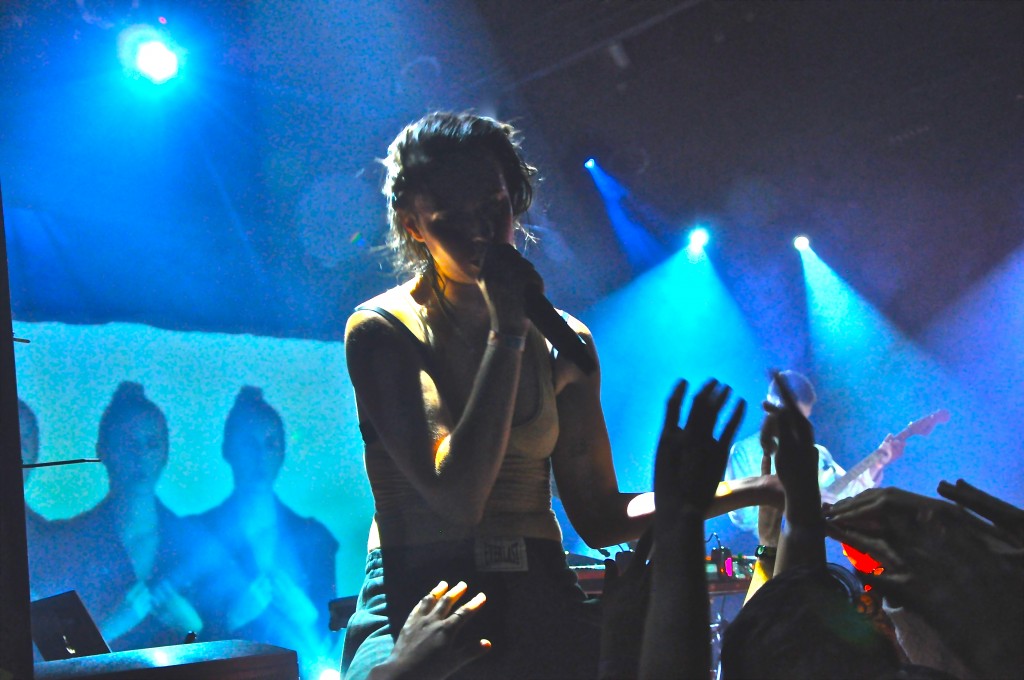 In between songs, she posed to the audience that she had a question for us. I assumed what was next was some rehearsed line, instead she wanted to know if anyone had a hair tie. And well, there ya go. That’s MØ. She has no idea what a disconnect from her peers even means, and that’s what elevates all that enormous talent to the next level. Living in Los Angeles equates to having the luxury of a surplus of live music, and seeing someone live for the first time becomes the ultimate test. There often lacks an authenticity. Especially in Los Angeles where insecurities run rampant; it borders on defying everything performing is all about. And, the bigger the rise, the more disconnect from their peers. Entertainment yes, but without the connection, what is there? Without the consideration of the audience, what is there then? If you don’t give a damn about who you are speaking to, then seriously what is there? MØ is right there amongst her greater collective, standing proudly, and in true punk rock form, embracing identity in the face of her kindreds, her peers. And, the talent and the music are good enough for her to take it all the way. She brings us back to what it’s all about. Her gifts are in the best light and she’s living out her purpose. She’s a star, but she knows, none of that shit matters, because she can’t lead with no pack.