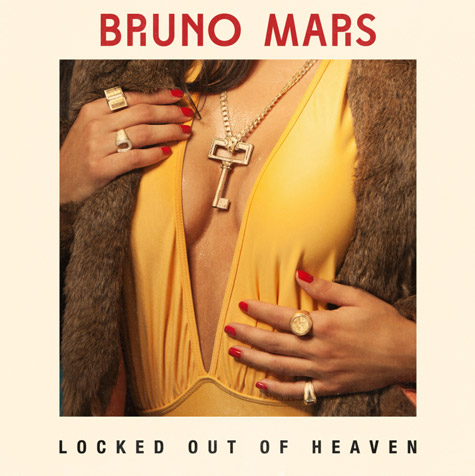 Holy Mainstream Pop, KTC.  Yes, yes, we know.  Since Mars likes to dabble his powerful vocals in many different genres in addition to there being some tracks on his newest release that are quite substantial for mainstream levels, we’re going to take a stab at it.

Unorthodox Jukebox is not an album you’ll be seeing 10 year old girls singing to (or maybe you will and then the Christian Coalition can really have something to get fired up about)  nor would you want to be listening to when you’re driving in a car with your mom.  It’s filled with risqué topics (okay, so just one) and coarse language bumps and stumbles around as well.  Mars goes above and beyond Doo Wops & Hooligans in a lot of ways, growing exceptionally unique as an artist and bursting out of his more low-key, Jason Mraz sound.   Yet, he keeps his crooning, Michael Jackson’esque, powerhouse vocals.  This is a plus, for we don’t want him to leave everything behind.

Mars’ had the pop production team of the century on this one (think Kanye West, Beyonce, Adele, and Amy Winehouse) so inevitably the tracks are going to have a really thick and juicy quality.  Yet there is also something to say about Mars’ vocals and arrangements, with killer verses and bridges that make you realize the intensity of Unorthodox Jukebox.   With all the highlights and “woah” moments, you of course get other, less unique moments and in some cases puts a real damper on the song.  I’m going to make case in point of “Gorilla.”  Lyrics are lame, centering on a night of animalistic sex, but one could be more creative then comparing such moments to gorillas, topped with hair pulling sessions and feds knocking down the door.  Lame.  Yet, the arrangements and instrumental transitions are really fantastic, sucking you in (and now I’m just all aggra
vated about the predicament this poses).

Even with more predictable moments, “Treasure,” and “Show Me,” you think, sure disco and reggae, but Bruno seems to sideswipe you and deliver catchy melodies in his verses.   In “Treasure” you find your shoulders moving, even if you don’t want them to because you know you’ve heard a song somewhat like this before, but he hits you where you don’t expect it.  What Bruno can do with his vocals is naturally delectable and is an extra dose of distinction.  “Show Me” hits you with a Sublime “Caress Me Down” feeling the whole way through (minus those damn club sirens #nothingIdespisemore).  I doubt that was Mars’ intention, probably wanting more of a sexy reggae song, but ends up coming up with something clearly better.

Besides having a reasonable magnified club scene bridge, I’m going to skip the strip club anthem (“Money Make Her Smile”) because it’s too typical of an “I’m going to do something outrageous with a lot of high pitched female loops” song.   Two tracks that stand out and overcome my deep depression over the former are “Natalie” and “When I Was Your Man.”  The first threw me off guard, filled with originality (sure, sounds like MJ, but it’s completely Mars-afied) and flare, set to an upbeat clap-track which creates a malicious antagonistic sound.  “When I Was Your Man,” is arguably the best track on Unorthodox Jukebox, a ballad in the most emotionally raw way.  Specifically with vocals like Mars, you get on the piano and belt out your deepest passion in pure melodic fashion, and you have something amazing.

With singles like “Young Girls” and “Locked Out of Heaven,” Mars starts out this path of his career edgy and strong with a top-notch sound.  He hits this album hard and you can hear how much was involved in the arrangements and instrumental additions.  Being a little crude in the theme, it will be interesting to see if there is any change in his fan base or if American teeny-boppers will just all turn into little vixens.