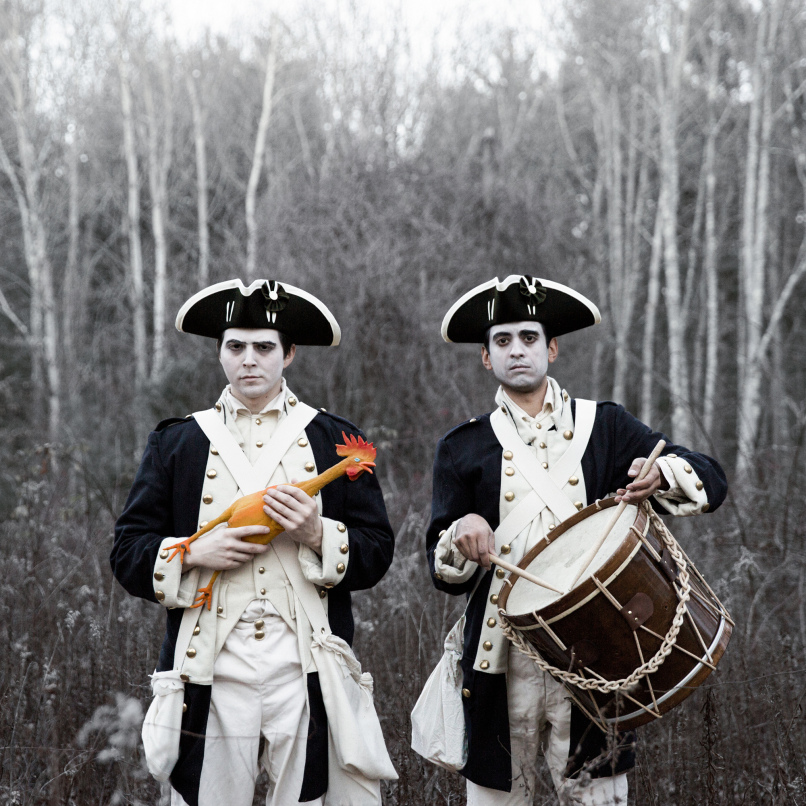 The initial vibes forming a slanted grin (for reasons including, but not limited to; Bob Dylan-esque vocals, saws delicately played with violin bows, and lyric and theme holding no boundaries to semi-orchestrated “pop” melodies) was the wise-cracking result of the duo’s Skeptic Goodbye.  As much seriousness was in the entirety, there was also a lot of childish fun and instrumental experimentation, which is why their fan base grew, including the usually-synical Killing the Cabinet crew.  Yet, not sure what to expect with round number two, I was overflowed with giddiness as their previous pop-attempts became pop-ballads and experimentation turned melodic showcases.  The transition into a more professional and mature sound (as I’m sure they would purse their lips at hearing) was not a given, but as Revolutionaries enfolds, is bouncing you along in just the right way.  Of course, this is not a kind way of saying they’re selling out to their indie sounds because I’m sure many friends will still give me the eyebrow and said it’s not what’s on the radio (which is exactly why I love it).  Yet, it definitely has the potential to do whatever it so desires because it has those key ingredients we long for in a catchy tune.

Not only until I’m jamming away to tracks like “Friends in Exile” and “No Divide” do I realize that another upswing from their former is the significance offered to the bass beats.  This distinction of movement allows You Won’t to enfold onto the entire song experience, toting along numerous peaks and bowing saws strapped to a foot-stomping foundation traveling a bit more of a guided path.

Of course you mix these potions and then you hear that the Ramones’ “Judy is A Punk” (just my favorite Ramones song, but no big deal) was an influence (among other artists and albums) to Revolutionaries and I’m almost as good as sold.  I must say, even before learning about the connection when I heard the vocal bridge of “The Fuzz” I very swiftly retorted with “oh, this is so Ramones…hot damn” (okay, maybe not word for word).  This upbeat track is a close favorite with all of its upbeat angsty-ness.  Speaking of vocal bridges, “Jesus Sings” easily slides onto my “Finales” playlist filled with things like Brand News “Seventy Times Seven,” Sia’s “Alive,” and other tunes that rip your heart and vocal strings out simultaneously.  It’s an anthem of bagpipes and sophisticated drumrolls, your head is tilted back while you pathetically try to replicate Josh’s intonations at an impossible rate.

With bagpipes on the brain, you actually get a lovely taste of another non-Celtic vibe in “Untitled 2,” as they hit you at a deeper level, forcing you to make tough decisions and choose forgiveness or betrayal, definitely more “Braveheart” than Irish step-dancing.  Of course, there are all different types of instrumentation, as we should all expect and some sounds I give up on trying to figure out because I’ve seen them live and I know as Raky is performing I’m saying “this is beautiful, what is he using?!” It goes with the territory, so let it go, listen, and enjoy.

With Revolutionaries having made its premiere on your favorite streaming device this past Friday, Boston is celebrating their album release party a week later to my utmost anticipation.  They’ll continue their national tour ending in the early summer, so make sure you check tour dates.