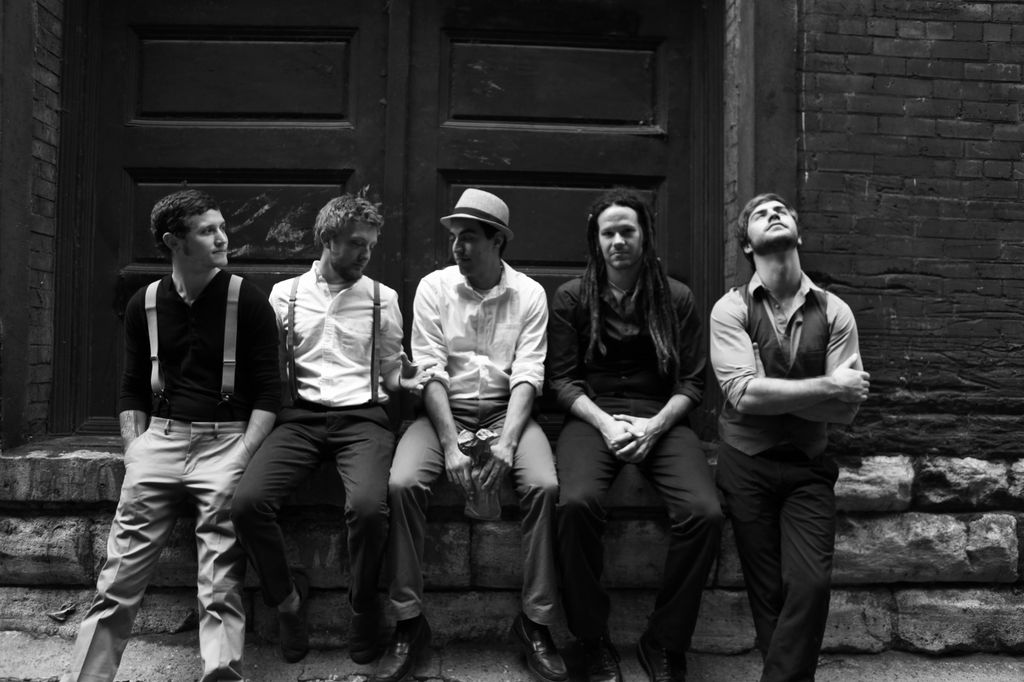 They tour. A lot. And they love to drink bourbon. This blues rock band from Nashville will get you on your feet…and probably get you to take a shot as well. We caught up with ….Ben Ringel (vocals, dobro), Dylan Fitch (lead guitar), David Supica (bass),  and Ben Azzi (drums) to see how life on the road is really treating them.

Hey there, this in Ben Ringel (the lead singer from The Delta Saints). I just wanted you to know whose voice you were getting.

As an independent band, you’ve really had to hustle to get where you are today and your success so far is proof that you don’t need the support of a label to do so. Did you always plan to be a DIY entity or has it just worked for you thus far?

BR: We were an independent band for the first couple of years because we didn’t really have any other choice. It’s hard to turn down a record deal when you aren’t offered one. As we have learned more and more about the music industry, and how it is completely changing, it is more of a conscious decision now. We would entertain a record deal, if it were balanced and fair, but at this moment we don’t really feel that it’s necessary. The industry is catering more towards the Internet savvy indie artist, the ones who are creative with their work and their approach. And that’s just what we’re trying to do. Staying creative and staying hungry.

With the success of your kickstarter campaign, it is clear that you have the support of you fans, especially when it comes to getting new music out there. In what ways do you strive to connect with listeners? What makes the Delta Saints unique and special to the fans?

BR: Our entire Kickstarter experience was pretty amazing. We were and still are completely humbled that our friends and fans believed in us that much. I think that one of the most important things is not losing sight of the connection between the people who buy your record, and the success that you may have. We’d be nowhere without the folks who pay to come out to our shows, and then leave with an album or two. We pay our bills, we fill the gas tank in our van, and we pay for our albums to be pressed, all because of those people who believe in our music. In return, we do everything that we can to make each show entertaining. We also try and get to know people before and after shows. Honestly, that’s one of the greatest thing about touring, is getting to know people in each city. A lot of artists miss out on that. We like to meet people, have a drink, and then ask to have 5 sweaty dudes sleep on their couch.

You guys recently finished a European tour and now you’re back in the states paying shows all the way from Colorado to the Dirty South. What are you listening to in “Shotgun Betty” as you make your way across the US?

BR: I wish that I had a better answer for this one. We generally hook up an iPod, and it’s usually the driver’s choice as to what is played. On any given day we can go from Kanye, to The Rolling Stones, from Bon Iver, to The Foo Fighters, and then could take a side step over to some sad country song. Everyone in the band likes different types of music, so it’s always interesting to hear what is going to come on next. We’ve really been listening to some friends of ours called Vitek. Their new record is brilliant. Also our buddy Andrew Combs and his new album quite a bit. He is one of the best and most original country writers that I’ve heard in a long time. That’s one of the perks of being from Nashville; you end up with some pretty talented friends. Again, I wish I had a cooler, more “rock’n’roll” answer for you, but honesty is the best answer. And If I’m being honest, you might also find some Katy Perry on a deep hidden playlist somewhere in the dredges of the van.

What types of day to day rituals do you perform to keep you grounded while you’re on tour?

BR: The best thing that I’ve found is to try and keep some sort of schedule within your day. Some of us run in the afternoons, others set their alarms for a relatively normal morning. When you’re out on a 2-month tour, you have to develop some sort of routine; otherwise you end up becoming a complete zombie. Also, keeping in touch with family and friends definitely helps. If I’ve learned anything, it’s that your mother will always offer a swift kick in the ass, when you lose touch with reality.

You played at Wakarusa this summer which brings together music fans from all across the board. Have you found that your fan base has evolved as a result of exposing otherwise unfamiliar listeners to your music at gatherings like this?

BR: Absolutely. Waka was definitely the biggest festival that we have ever played, but we have also done a number of local festivals around the South East region. It’s been pretty fun, watching the diversity expand at our shows. It definitely makes us feel like we’re doing something somewhat original, that not only one type of person can appreciate the music that we’re making. Also, I just love walking through a crowd and smelling patchouli and then Old Spice.

Your debut album Death Letter Jubilee is set to be released January, 2013. How different would you say your sound is today in comparison to 2009’s EP Pray On?

BR: To me, they are night and day. When we recorded Pray On we had only been a band for around 6 months, and had maybe played 15 shows. We were babies when we recorded it. 4 years later, I’d like to think that we’ve grown up, and gotten better at writing. Don’t get me wrong, I’m proud of our first record, but I’m also proud of the progress that I’ve seen. I think the new record is more refined. With Pray On and Bird Called Angola, we were searching for our sound, trying to find what fit. I think with Death Letter Jubilee, we finally found the sound that we were looking for. It has more depth and dimension in the songwriting, and also in the recording. The songs are more diverse, and we really tried to pay attention to the track sequencing, so that it kind of tells a story within a story.

What was the recording process like for you and in what ways have you grown as a band (and as friends) after all of the hard work that goes into creating an album?

BR: Recording Death Letter Jubilee was a bit of a whirlwind. We got back from Europe at the end of October, and went straight into touring around the States. We didn’t actually have a chance to sit down and write/start pre-production until January, and we recorded the album during the first 2 weeks of February. It was a lot of work, but once we got into the studio, we settled into a really great creative space. It’s hard work, and we were all pretty burned at the end of it, but it was an amazing experience. There’s a lot of trust that goes into creativity. We came out of it with a few bumps and bruises, but definitely a lot closer as a band.

Were there any specific life changing moments for any of you that really inspired songs from this album?

BR: There’s obviously a connection with every song, some more so than others. For me, it’s with the song “Old Man”. I watched a man lose his wife to Alzheimer’s, and the idea that you can build a life and a marriage for 50 or 60 years, all to have it forgotten. The song is about this man’s plea that he not be forgotten.

You guys really rock out in your live performances and your fans do, too! I love a good dance party and Delta Saints make that happen. What other bands do you all love to see live and just get down to?

BR: We certainly give it hell. There is something undeniably fun about making people dance and drink. As far as bands that we like to see live, we have some friends out of Columbus, Ohio called The Floorwalkers, who absolutely tear up the stage. Also, our good friends in Vitek are really incredible live. Those guys play music that will make your stomach hurt, because you are grooving so hard.

What is it about the Nashville music scene that sets it apart from all other music cities? Is there one restaurant or “Nashville culture” dish that we must try during our next visit?

BR: I think that one of its biggest attributes is its musical diversity. Most people write off Nashville as simply being country music, but it has so much more depth than that. We’ve got some of the best Indie rock and Americana rock coming out of this city right now. There’s some killer stuff, if you just know where to look. As far as food goes…Without a doubt, it’s McDougal’s Fried Chicken. Get a large basket with Honeybee sauce, and prepare your mind and arteries to be blown.