Descending Into a Cavern of Melodic Pleasantries: Tree’s Demons EP 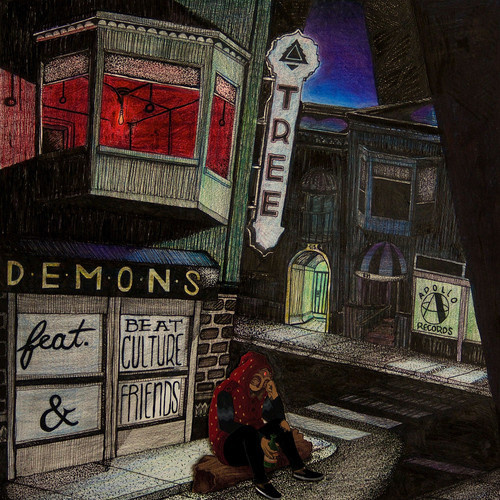 Budding on the fantastic absurdity of |twenty one pilots| rapping mingled with the vocal emotional oozing of a child version of Andy Hull (Manchester Orchestra) comes Oliver Nickell amplified with his featured artists forming Tree.  Gathering this is a socially artistic movement, going beyond the captivating music creation and making it a tad confusing to gather what is what as their website promotes art galleries on the same playing field as the music.  I’m all for tying it together; I certainly understand the cohesive nature that music and art play with one another.  Yet, still a bit confusing I’ll offer you the basics; Oliver Nickell is from Santa Cruz and has created Tree which typically consists of featured artists (Lena Kuhn, Beat Culture, and others).  Now among music there is also an art presence (Tree Collaborations), which you can find designs on album covers, t-shirts, and other unassociated prints by multiple artists.

Since this is an album review…I’m going to be focusing on the three tracks housed on Tree’s EP.  So there’s rapping, but it’s more of a thick, mouthy extension of words laid out in quick successions than it would be compared to someone like Macklemore.  That’s where the connection to Manchester Orchestra comes in, Hull has a conversation with you and elicits every syllable in order to get the emotional message across.  In the same way, Nickell also expels his words making this so intoxicating and personal.

Going beyond the |twenty one pilots| and Hull functionings floods Youth Lagoon-esque darkness and oddites.  The composition and instrumentation is synthy and peculiar.  The mystery is tinged in darkness, a gloomy experimentation that is felt more than it is stated.  Some artists thrive on the notion of ‘creepy’ or ‘eerie,’ where I think this album just so happens to slowly descend you into a dimly lit atmosphere.  Yes, it is titled Demons, but we’re not talking German death metal.  The captivating notion of it all is the fact that the melodies are never jumbled or lazy, rather it flows on a stream of pop catchiness.  The track “Rabbit Hole” is this Purity Ring type of ambient beats that assembles hooks and transitions with the best of them.  Though you’re being lowered into the vast perfection of Nickell’s mind, you easily find your way around (even with all of Wondrous Bughouse goodness, you tend to temporarily lose yourself).

This brilliant balance only means one thing, this young man is absolutely talented.  His take on Radiohead’s “Karma Police,” proves this in its own right.  I don’t like sharing embarrassing music moments, but I think it helps my point here.  I was about to research what song “Karma Police” sounded like during the verses when I realized that it sounded like…”Karma Police.”  Hand to the forehead, please Radiohead fans, forgive me.  Here’s why I was not thinking clearly; one, it is a completely different take on the song instrumentation composed of less strings and replaced with more beats and two, Tree’s version includes original lyrics with rapping intertwined between.  You’re still judging me, whatever.

With the August 13th release date, I’m looking forward to see where these tracks appear since the ability to attract multiple genres is so applicable.  Meanwhile I’ll continue to be swept into an explosive graying state of mind as Nickell shares furtively his inner thoughts.

TAGS: International Incident, Fiona Apple performing one of my favs in a living room and chops her hair, R Kelly is trying to be cool