Eccentrically Partial To Happily Ever Afters: Perma’s Two of A Crime 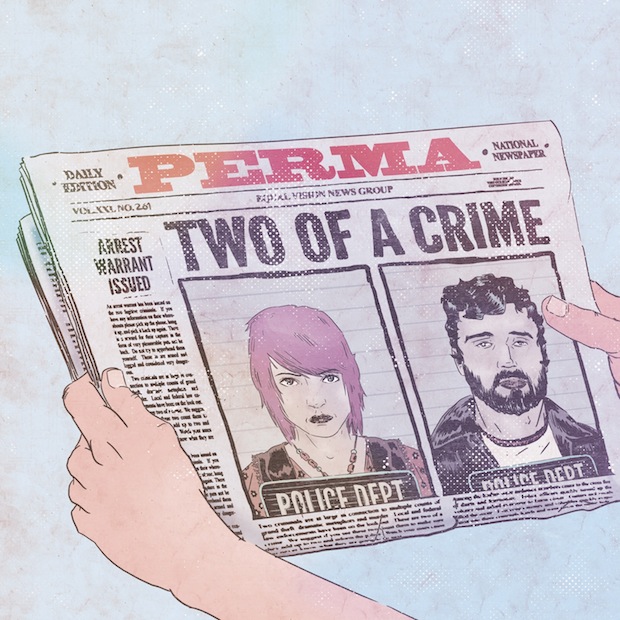 This pseudo-fantasy (much like Bemis’ comic series “Polarity”) of the fated Bemis-Dupree duo has been in the making for some time now.  After their beloved exchanging of vows back in 2009, it was assumed that singer/guitarist Sherri Dupree(-Bemis) of Eisley and musical extraordinaire/frontman Max Bemis of Say Anything would collaborate in some aspect.  Early on they created the duo Perma and released an EP, and just when you thought that the excitement of newlywed ideas had been lost, they announced they were working on a full-length album.  October 29th Two of a Crime was released [Equal Vision Records] to the excitement of Eisley/Say Anything fans alike as well as those into the more slower-paced crooning that evidently would be the foundation of a husband and wife partnership.

A cautious transition from their norms, the two artists certainly are doing nothing out of the extreme or stepping too far out of their comfort zone.  Combining their quirky natures in a more open setting than in the confines of a specifically established band sound, their love flourishes daintily among fictitious situations and pop-y melodies.  A little dark in areas, but that’s nothing surprising, actually, I’m giving a more questionable glance at the fact that it is as bright and happy as it is with the Two of a Crime title.  Not that I’m complaining or anything, probably Max’s continual angry-to-cheerful evolution that has contended with Sherri’s duskier Eisley association.

Creating a wraparound of tempos affixed to flavored melodies and dissected emotion, this LP has more to offer than just being an “offshoot band.”  It’s simplistic in instrumentation, compared to Say Anything’s recent Anarchy, My Dear (check out the review here), but in that you are able to hear the glorified organic sound that Bemis and Dupree both bring to the musical table.  Being talented musicians often lends itself to instrumental experimentation and tends to overshadow the raw wonder you fell in love with to begin with.  With both Bemis and Dupree going back to a drawing board, of sorts, and creating from the ground up, you are irrevocably faced with the delicious falsettos from Sherri and sexy guitar bridges from Max.

“Two of a Crime” probably clenches its teeth into your joyful soul’s first listen.  It’s superbly chipper with multiple bridges, finger snapping, bom-bom-bom’s that slap a smile on your face faster than seeing a cute puppy.  Tracks like “Little Light” and my possible-favorite “No, Dear” follow this same grinning induced atmosphere.  The reinforcement of lyrics and mellower melodies are distributed throughout as well, “Wishbone,” “Remedy,” and perfectly titled “Torch Song.”  Some aspects of Two of a Crime are just good-natured romantic three minute tunes, but this freshness in artists that we have grown up with and have come to idolize is quite pleasing.  They have a set theme that is carried throughout without trying to come across like something in their past or copying a wedded Mates of State or a sibling entangled Angus & Julia Stone.

TAGS: Ron Burgundy interviews Katy Perry, TLC back at the AMA’s, We are Phoenix, Lady Gaga?