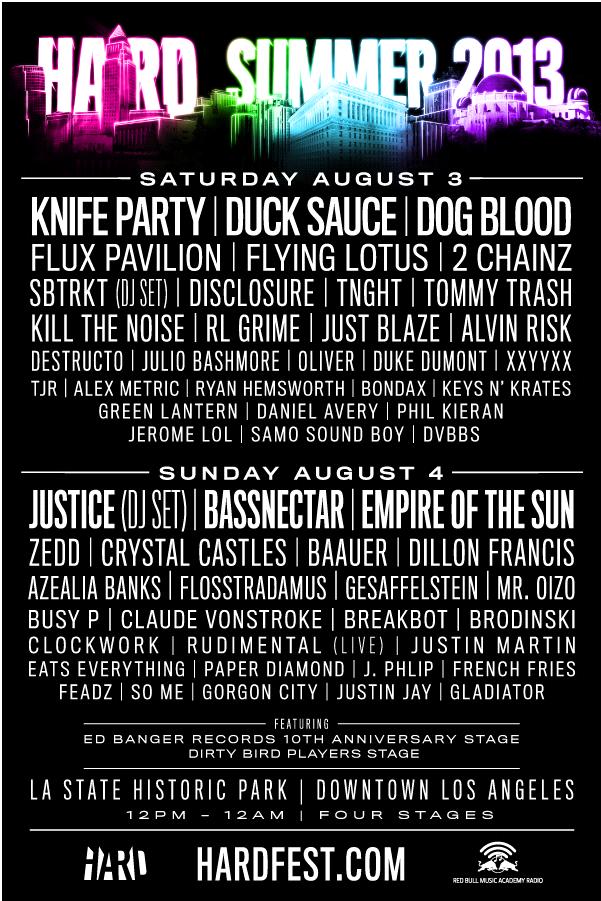 Welcome to the world of Hard.  We are so excited to be previewing the premier event of the summer in the city of angels at Los Angeles Historical Park.  Featuring quite the mix of contemporary electronic, electronic-rock and dance music under the SoCal sun for two days, August 3rd and 4th.  Bring your suntan lotion, lots of water and leave all your worries at the door.

2 Chainz‘s thoughts on Obama, Coachella, Kanye West and being healthy.
Azelia Banks likes fighting on Twitter.
Baauer had 15 minutes earlier this year.
Crystal Castles will make you slow dance.
Dillon Francis set on Friday the 12th at Coachella was incredible.
Disclosure is hyping here, here and here.
Dog Blood is the baby of Skrillex and Boys Noize. Listen.
Empire of the Sun are awesome.
Flying Lotus are kinda famous?
Justice were amazing in Las Vegas last year!
Knife Party are our #1 target.
Zedd will definitely play Clarity, and the whole festival will go crazy.

Tickets are still available for Saturday and Sunday.
Weekend passes and VIP packages are available too!