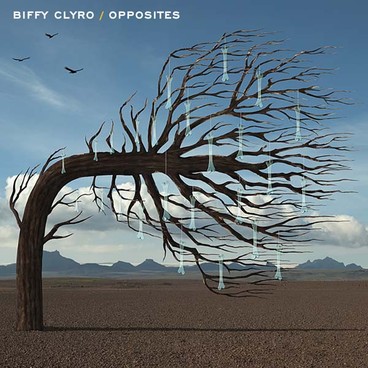 Rock precipitates, forming into crawling beads of sweat venturing over your body and with a distorted guitar riff and a pause – you’re relieved of soaking modules as you fling full throttle into twenty colossal tracks.   Four years after their last LP (Only Revolutions), Biffy Clyro amplifies the rock world with their double LP Opposites featuring “The Sand At The Core Of Our Bones ,“ as their first of ten songs, then “The Land At The End Of Our Toes” as their second piece.  From Glasgow, this trio has been reeking of talent for almost two decades.

The catchy guitar melodies, with heavy and filthy moments amongst the clean catch glances of Manchester Orchestra (which of course is one of the most epic modern rock bands) with the slower few and vocal moments of calmness creating likeness to Snow Patrol.  These comparisons can be picked out on a note-by-note basis with some tracks sounding familiar in some way.  Yet, our need for an in your face plethora of guitars all ranging on different levels to reach deep into your soul to ricochet vibrations of all proportions is all seemingly necessary in our music world.

With this album being released a few months ago, I initially had the desire to rock out with track two (“Black Chandelier”) and enjoyed the bulk of the corrupting beats and riffs.  Yet, it was the moment when I was so entirely stressed out, driving and hoping I wasn’t lost, where I didn’t know what to listen to to match my current emotion.  That’s when Opposites struck me, and it struck me good.  Within a half second into disc two’s “Stingin’ Belle” I felt disgustingly satisfied as my annoyances and aggravations were displayed in the form of three gentlemen rocking the hell out of a catchy melody.  The tracks journeyed alongside my need for a rock release, afterwards kicking my frizzled energy back into gear.  This is when I realized how much a well-produced and compiled rock album needed to be a part of everyone’s lives.  With rock feeling more like Imagine Dragons these days than Metallica, Biffy Clyro gouges the grey line, welcoming both parties with highly qualified musicians throwing in a delicious sultry taste (“Trumpet or Tap”) sliding between an upbeat alternative rock pop’ish sound (“Pocket”) and the electronically sparkling bass heavy “Skylight” allowing a break for their calloused fingers.

Brilliant tracks are splattered throughout, inhaling and exhaling the crashing of drums, moments where you’re hoping something gritty and fabulous will happen and Biffy Clyro delivers.  One of these include “Accident Without Emergency,” a complete collaboration where the verses, choruses, and bridges climb desperately over one another to reach the peak of perfection.  While “Spanish Radio” has the foundation of any tight-wound rock sound from any moment within the last twenty years, their single “Biblical” forms at a similar level – yet spiking to orchestration and emotional proportions leaving hair standing on end.  There are so many tracks in Opposites that it is only appropriate that you will fall in love with at least one guitar screaming, drum rolling song.