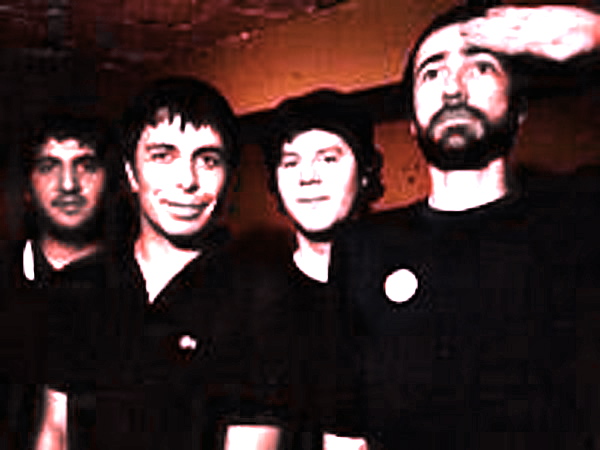 This is a flashback concert review of the Shins show in Minneapolis’ World Famous First Avenue in June of 2004.

Look for Charissa Lock to review Port of Morrow tomorrow right here on killing the cabinet.

With determination overtaking his face, James Mercer, leader of indie rockers the Shins, began to strum the opening guitar line of his song “Know Your Onion,” only to be interrupted by his giddy bandmates carrying a brief imitation of Prince a bit too far.
The music stopped. With a perturbed look, Mercer snapped, “I’m trying to play a song!” Rebuked into silence, the musicians resumed their supporting roles as the singer continued on.

This incident at the group’s concert Sunday in Minneapolis was endemic of the unusual dynamic that exists in the band between the intensely serious Mercer and some of his attention-starved bandmates, all clamoring for the crowd’s gaze.
Public attention is something the Shins should be getting used to. With their career in the ascendancy, the old school, guitar-pop band (formerly from Albuquerque, N.M., but now headquartered in Portland, Ore.) has collected some impressive achievements for their resume during the past four years: two highly praised CDs, extended tours of the U.S. and Europe and several late-night TV show appearances. It’s these kinds of accomplishments — achieved through word-of-mouth and grueling roadwork and not industry conniving — that already have some major labels sniffing around.
With this increased fame has come the public perception that the Shins are essentially a one-man outfit, built completely around frontman Mercer with his highly personal, singer-songwriter-style material and his soaring tenor voice.
In concert, however, the group’s other personalities emerge in glimpses, providing laughter and sparks of creative electricity between the musicians, momentarily taking the focus off their leader and keeping the show from becoming too intense.

Before the band members could wrestle over the spotlight, their first task Sunday was to face the formidable challenge put forth by one of the evening’s opening acts.
The Shins‘ competition was fellow southwesterners Calexico, who played an hour-long set that was a tough act to follow. The six-piece’s songs are a synthesis of old-time rock and country with Latin rhythms, flamenco and Mariachi music. The songs were both melodic and instantly rhythmic. They kept the audience in perpetual motion. To create this musical stew, the band made full use of their numbers, embellishing the songs with trumpets, keyboards, accordion, vibraphone and pedal-steel guitar.
The apex of the group’s performance came with a stunningly well-executed cover of “Alone Again Or” by ’60s psychedelic rock group Love. With several tempo changes and some complicated musical intervals, the song is an imposing task for any band to attempt. However, Calexico took the track head-on and performed flawlessly, despite the fact that singer Joey Burns seemed to call out for it spontaneously in the middle of their set. The crowd rewarded their daring with emphatic cheers.
Such bravery would also pay off for the Bay Area-based Rogue Waves, who started the show. Although their sleepy art-rock didn’t catch on with the crowd, the combo showed some guts with a snail-slow, keyboard-laced cover of Nirvana’s “On A Plain.” The tune’s inventive arrangement hinted that their maybe something interesting beneath the group’s lusterless original material.

The Shins’ arrival onstage was a cleaning of the palette visually as well as musically. Compared with Calexico’s mountains of instruments, the Shins’ stage setup was spartan. With only a few small amps behind them and no stands to hold the musicians’ instruments (they left their axes on the floor in between songs), the band delivered a succession of pristine, cathartic pop songs.
The group’s 18-song set took them through most of the best-known cuts from their two albums, split between chord-heavy rock songs and sing along-ready acoustic numbers.
Early on, the band kept the tempo upbeat, beginning with the echo-laden “Caring Is Creepy,” where Mercer was awe-inspiring as he a leisurely balladeer. They followed this up by diving into heady material like “Kissing The Lipless,” “Turn A Square” and “The Celibate Life.”
Later, switching to acoustic guitar and harmonica, Mercer led the group and the army of fans in the audience through tracks like “Young Pilgrims,” “Pink Bullets” and “New Slang.”

While most of the songs remained close to their original arrangements, some were reworked to their benefit. The stomping rhythm of “Pressed In A Book” was introduced by a spacey jam that was saturated with keyboard effects. The stellar “Gone For Good” was sped up from a country-ish lament to a Western swing so compelling that not even Mercer flubbing the lyrics could detract from it.
Mercer’s vocals kept him in the spotlight, but he spoke little to the audience. He gave his all throughout the night, his focus always on the music. His veins were popping out of his forehead and neck as he stretched for the right notes.
In contrast to Mercer’s directness, his bandmates took every opportunity between the songs to clown around. Stationed behind his Roland keyboard at center stage, multi-instrumentalist Marty Crandall bares a striking resemblance to Chris Parnell of “Saturday Night Live” fame and shares the comedian’s goofiness. Crandall used the echo effect on his keyboard to accompany himself in a couple bars of Steve Miller’s “Fly Like An Eagle” (you know, “time keeps slipping …”). He greeted the conclusion of a song by cueing some fake applause on his keyboard (a la Ferris Bueller).
During the encore, Crandall and guitarist Dave Hernandez joined forces for a brief and hilarious rendition of Prince’s “Purple Rain” that included Crandall imitating the Purple One’s screeching vocals (the joke: the Shins’ concert was at First Avenue, which was the site of Prince’s performances in the 1984 film).
Even Mercer’s face eventually broke into a grin at his bandmates’ silliness, but he was quickly back in the zone and straight to business.
Perhaps Mercer’s passion and his fellow musicians’ onstage buffoonery can be explained away by the fact that the band has spent much of the last several months touring. (They certainly looked like the road had taken its toll. The joyful expressions that can be seen in their photos have been replaced with sunken cheeks and dark rings under their eyes). Sunday’s show was the last of a two-night stand to close out their current U.S tour.
Next up for the group is an extensive European jaunt, where the Shins have still more audiences to charm with their music and comedy act.

TAGS: Pink, What a tour this was, New Slang rules, 8+ years of getting great, Rogue Wave > Calexico, John Hughes 4EVER

special thanks to David Hyland for writing this article.  This article was reprinted from WESH’s (Orlando) Sound Bytes Section.