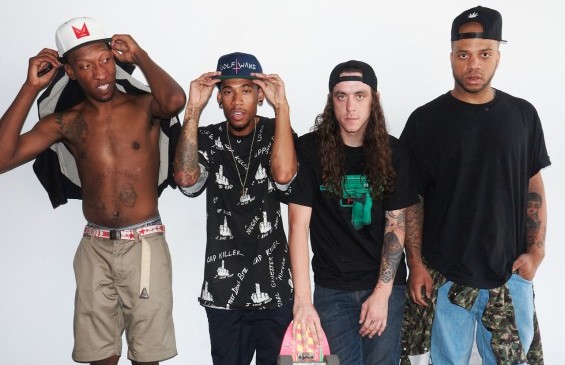 At the Jubilee Music and Arts Festival this past weekend, there were several bands that I enjoyed thoroughly and many more that did not impress me as I had hoped they would.  Trash Talk absolutely blew me away from start to finish.  I actually didn’t see the set in it’s entirety as I had to rush off to see Kitten next door but the portion that I was in attendance for was impressive.  The Metallica-ish guitar riffs, hard core screaming vocals and extreme punk rock was actually a breath of fresh air after the not-so-enthralling Bleached set I had seen on the same stage just an hour before.  Lead singer, Lee Spielman, was completely captivating, thrashing himself around on stage, front flipping into a crowd surf on numerous occasions.  It was the most movement I had seen in a crowd all evening.  Overall, I was reminded during the Sacramento based quartet’s performance why the love for such intense music is so severe and passionate: the thrill and the release that one experiences during such a performance is like no other.  Head banging, throwing up your horns, and throwing your body around only to be bounced off of another’s who is experiencing the exact same extreme euphoria enlightens a plethora of senses like no other.  Chloe, lead singer of Kitten, said it herself during her set and I have to agree, “I want to make out with all of them.”

Future Unlimited was equally notable, but not quite as extreme as far as performance.  The self described jilt-wave group from Nashville  had a super chill sound and vibe with their retro synthesizers, drum machines and U2-esque vocals.  Their songs were solid and, although they had been drinking Jameson all day and weren’t precisely on point, they put on a memorable show that compelled my interest and desire to know more.  Check out the video for “Haunted Love,” one of three singles they have released in the past year along with the EP Future Unlimited.

TAGS: parking lot festi, warehouse party, Chloe ripped her pants, she could care less, system of a down next month, ready to rage