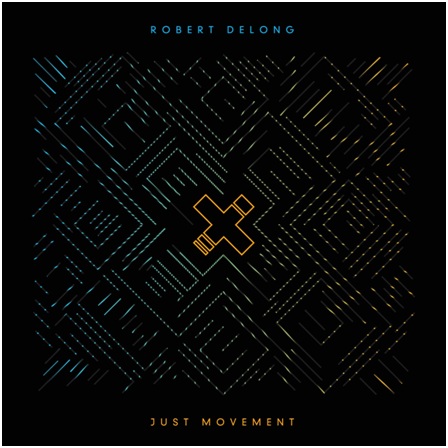 2013 has been bombarded with indie gloriousness; strummers, light keys, flurries of synth, and careful melodies.   Shaking us by the shoulders in spicy beats with acquired ascensions comes the talented LA lad, Robert DeLong.  Not shoving anything in your face (except maybe the main beat in “Global Concepts”…) nor overriding your senses from start to finish, but rather sending you along through each song, breaking off in order to present you different images of one continuous sound.  Never really being sure what will come next, DeLong’s tracks keep you in suspense without the need to cross your arms and raise your eyebrows.

As a writer, there is always a process that goes through creating any piece, certain steps that are followed – even if subconsciously.  Coming from an academic background, DeLong seems to effortlessly move the melodies along, being as meticulously smooth as possible – even if subconsciously.   This is why as your listening to Just Movement, you let your soul be so easily taken – he is taking it without you realizing its happening…he’s smart.  Very proper and elegant with colossal dance beats spewing a radiant edge to such a detailed structure.

Yet, this is not just “dance music,” don’t think Calvin Harris, or Deadmau5.  Robert DeLong implements rock attributes, so that it is not just focused on the build and descend.  Yes, you still get epic moments with a killer build up taking place to make you lose it when he hits the sweet spot.  There are quite a few moments on this album where you could categorize this into indie rock without the word “dance” or “electro” being followed.  Take “Happy” where this great chorus is repeated in an echo-pattern that could fit into any Imagine Dragons or Paper Route track.  Then of course you get an intro, like the one on “Change” and you feel like you’ve just stepped a stiletto foot into a club on a Saturday night.   Besides all this phenomenal composition, there’s an added layer of lyrical theme that embodies Just Movement.   With a scientifically religious viewpoint on life – you’re bound to get some thought-provoking and uplifting perceptions on life.

Has it been mentioned that Mr. DeLong is a multi-instrumentalist?  This is all him, even live.  His performances are not to be confused with “dj’ing,” but rather a one man band producing most of his work right in front of the jaw-dropped crowd.    At first you’re not sure what to do about listening to this type of music, because you’ve certainly heard much like it, but nothing done with such precision in this electro-indie-pop-dance-rock fashion.   An intelligent and perfection-before-popularity, Owl City?  “A Few Years Make” is filled with about 7,000 things you need to listen to that is all happening at once in a calm and complex way.   So you must just play on repeat, and with every new listen you will certainly be connected to a new piece of this journey.

The tracks that blow me away, I already know will change in about 8 more listens.  With a bulk of the tunes being instantly appreciated, it’s only a matter of time before I find another moment I gain a deeper connection with.   “Perfect” and “Basically, I” are the tracks that have hit KTC over the head, and personally, the messy and heavier beats of “Survival of the Fittest” have latched on to my soul.  Though the single “Global Concepts” is doing quite well and beats are duct-taped in your head for an entire day – I’m still angry at how much I like it due to the super “clubby” atmosphere it creates.  Yet, I can picture most of my friends enjoying it, so that just goes to show I’m really picky and Robert DeLong is going somewhere.  He has all the right elements in all the right places, he’s young, he’s creative and humble, he’s of the higher academic intelligence, and all those pieces are sure hard to find in one artist (notably the latter).