In A Category All By Itself: fun.’s Some Nights 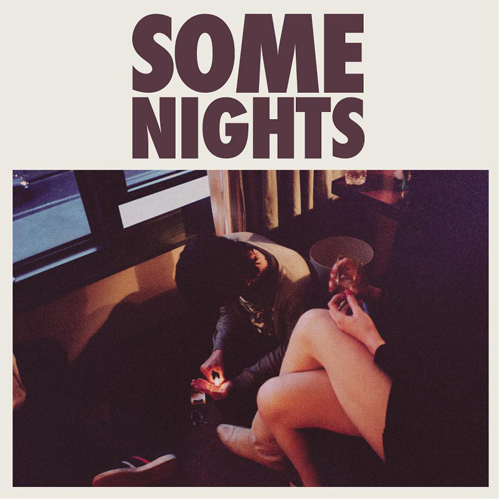 Most people can recall lead singer Nate Ruess’ vocals from The Format, but don’t seem to remember any songs off of fun.’s first album Aim and Ignite.  This is a shame, because in 2008 when Nate separated from The Format and met up with Andrew Dost (from Anathallo) and Jack Antonoff (from Steel Train) they created something unique and beautiful.  Songs were musically spectacular, with arrangements, technique, and Ruess’ voice going further than it had previously in The Format.  I had this album on repeat for months, including one of my top 30 songs of all time “Walking The Dog II.”  Enough about their past glories when there is so much I want to say about fun.’s sophomore release Some Nights.

Fun. (now do I not capitalize even though it starts a new sentence?) has this amazing ability to create something that you have only heard bits and pieces of from other musical moments.  Any inspiration they receive doesn’t just get put into the song; it seems to be disassembled and reassembled through different techniques and styles, so that it seems you have never heard anything like it before.  This is why I will forever have the highest expectations for fun. (two periods here?).  Every song you hear is entirely new and entirely different than the one you have heard before.  Even during a track, you have no idea where it will lead to next and the bridges’ will always be one of the best parts of a fun. song.  It seems like I’m doing a lot of unspecified praising, so let’s push up our sleeves and get into Some Nights.

The first track “Some Nights (Intro)” does exactly what “Be Calm” did on Aim and Ignite.   On Some Nights, out of nowhere you are thrown into this operatic, pompous world that could be from the 19th century.  Yet, fun. wouldn’t allow such a set theme, so Ruess solves this problem by using vulgarity and mentioning political and social networking themes from the 21st century.  Now that you have been taken off guard, you most certainly want to keep hearing more just like it, but different.  Fun. solves this problem too.  They create every song to the same caliber of excitement, catchy, and inventive moments without ever repeating the same ‘type’ of song.  “Some Nights” is next with a choir and slow thumping bass drums.  On their Soundcloud album preview, a user commented that it reminded her of Lion King and it certainly gives you that same “Circle of Life” feeling.  I also catch a glimpse of a 21st century Phil Collins tune.  The third song most of you have heard, “We Are Young,” which is their first single off the album and also has a phenomenal, slow-motion-destruction-prone music video.

“Carry On” starts out mellower than the others and is one of the closest to a “slow song” on the album.  However, one minute and ten seconds in, drums come in and we have a strong and powerful “ballad.”  It is the essence of a one AM bar experience with your friends (plus those random people you were standing near who have now become your friends) and everyone is loving life.  Ruess is much more poetic than I and I’m pretty sure if you add bagpipes to anything, instant brotherhood occurs.  Flowing right along, “It Gets Better” hits you quick.  To me, this is the most ‘unlike’ fun. However, the more I listen to it, the more I like it.  The first thing I thought of was “This sounds like a Rebecca Black song!”  With that in mind, I have now labeled this song as a mockery of all those silly young children who think they can sing because their daddies have lots of money, “What have we done?  Oh my god…”

“Why Am I the One,” also starts slow, but drums kick in much sooner than “Carry On,” and it is quite a moving break-up song, with the point of view of the victim.   There’s a focus on the hopelessness of it all, rather than the “I want you back,” feeling.  Without much break in between, “All Alone” is next.  It being my least favorite due to the fact that I feel like I’ve heard the verse before from The Fugees and the background vocals remind me of a Cat Empire song (nothing against Cat Empire).  Only because I’m able to compare it so specifically to something else, I semi-discredit the song.  If I didn’t have such high expectations, this would probably be one of my favorites.  The children’s choir appears on track 8, helping out Ruess in “All Right.” This is a song that could go either way depending on what your mood is, either depressing or hopeful.  I was surprised that the children’s voices didn’t degrade the song, and they seem to come in at the perfect moments to add extra emotion.  And what a surprise, the bridge is prone to give goosebumps.  The next track was released as a free download after “We Are Young,” and I fell in love the second I heard the beats.  “One Foot,” has this heavy beat where the volume needs to be turned up even if you’re in a nursing home visiting your grandma (why you’re listening to fun. in a nursing home?  Well, you can’t get enough clearly).  This is one of my favorites on the album, implementing everything a great upbeat song requires.

Two tracks left, including the bonus and you’re already sad that this album has almost come to the repeat button (not end).  “Stars” is one that could easily be on Aim and Ignite, minus the autotunage towards the end, which then sends this blasting into the world of “WHAT?!” (in a good way).  The 2 minute switch over is perfection, with many Kanye attributes (especially guitar at 3:14). The bonus track, “Out on the Town” is quite a fantastic something extra; again proving that fun.’s bonus songs are where it’s at. This is a great conclusion of Some Nights, involving the multiple genres, using different instrumentation, and a dominant bridge.

The two friends I introduced fun. to both commented that Ruess sounds Irish or Scottish.  Even though I was pretty sure he wasn’t, I researched this and he is from Arizona (sorry ladies).  I never felt he had an accent, but I am well aware that he has an exceptional voice.  More so than ever, you are able to hear where it can go, hitting the highest of highs and holding out long powerful notes.  I think the reason they felt he had an accent was how Ruess is able to use his vocals.  Not just as the messenger, but also taking the element of instrumentation and being able to keep control while going places you don’t typically hear, even in the smallest moments. Not Irish, just very skillful.

Fun. really pushed their limits on Some Nights, not better or worse (though you could beg to differ).  They have continued to experiment and stretch their “limits” wanting to continue to be different and refreshing.  There is no moment on this album where you’re bored or you’re daydreaming or not having a wonderful time listening to the heartache, confusion, disappointment, and uplifting emotions Ruess so beautifully shares with you.