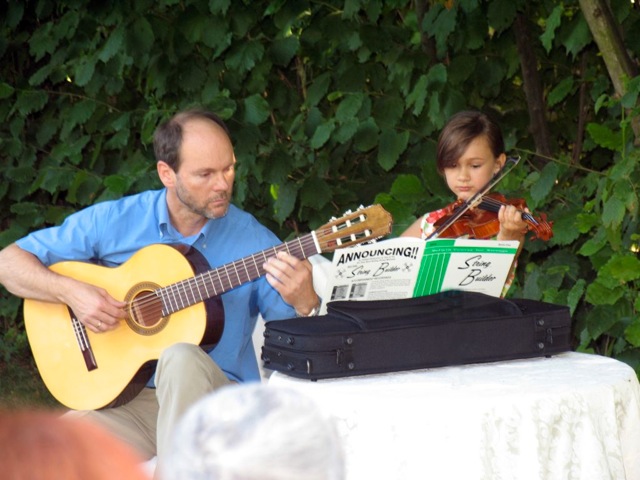 You were trained as a classical guitarist as a child and even studied under the Romeros, “The Royal Family of the Guitar”.  Tell me about your background as a musician and how that played a part in the foundation of Cordoba.

TM:  My parents were not musicians, but they were artistic and loved music so we attended classical music concerts, ballet, and opera on a regular basis.  I started playing piano at 6 or 7 years old, and later switched to playing guitar.  I was hoping to play electric guitar in a rock band, but my parents required that I learn classical guitar first, which ended up being an important turning point in my musical development.  Many years later while studying at UCSD, I met the Romeros, who took me under their wings. They helped rebuild my technique, and generally raised my level of playing. However, the exposure I got to great instruments was equally important.  The Romeros have an amazing collection of vintage classical and flamenco guitars, all of which they invited me to play and explore. This helped develop my ear and eventually led to the founding of GSI, and later, Cordoba Guitars.

What is your mission statement as a company and how do you strive to maintain individuality with all of the other monster competitors that also design and build nylon string guitars?

TM:  To be honest, I have never honed a precise mission statement for myself or the company, but if I had to state it in a few words it would be this: Bring music and joy into as many lives as possible through the nylon string guitar (and now the ukulele).  By keeping our focus very narrow, we are able to outmaneuver and outperform even the biggest companies who venture halfheartedly into our space.

How do the newer models like the Guilele and the GK Pro differ from older models? What inspires creativity and new methods of design?

TM:  The Guilele has a unique story.  We were selling a shocking number of ukuleles when we realized that many uke players were really guitarists looking for a different sound.  However, the ukulele has a different tuning that requires the player to learn new chord shapes.  The Guilele is really a cross between a larger ukulele and a small six string guitar, so it’s almost seamless for the player to adapt while offering a uke-like quality of sound.  The GK Pro is an all solid wood high end version of the GK Studio, which has been one of most successful models over the past several years.  We are inspired by meeting the needs of our customers, including performing and recording artists like the Gipsy Kings (in the case of the GK series), but also the hobbyist who wants to play for themselves, record at home, or study performance in a conservatory.  We continue to try to think of new possibilities for the nylon string guitar, including its presence onstage.  That is our next big project: a stage-ready guitar for large venues and high level amplification.

Gibson had problems last year with importing woods from Madagascar and India with the Malagasy law and Lacey Act banning the export of unfinished ebony, a threatened natural resource commonly used for the production of fretboards and fingerboards.  Were you affected at all by the laws implemented on importing ebony?

TM:  Only in the sense that we are being very careful to follow the rules of importation strictly and make sure we don’t violate laws or regulations.  Our focus continues to be on utilization of the best materials for obtaining the best possible sound and longevity of the instruments we make.  Generally speaking, it has not been a problem, aside from an increase in cost of some materials due to the new restrictions and enforcement.

You have such an eclectic roster of artists playing your guitars (Selah Sue, Kina Granis, One Republic, M Ward). What are some commonalities amongst these artists that have led them to Cordoba… or vice versa, what led you to them?  Is there a particular style of musicianship that you build your guitars around?

TM:  I think all our artists share a desire to work with nylon string guitar or uke to obtain a particular sound that they can’t get from steel string or electric instruments.  Some are well-trained classical or flamenco musicians, even if they make their careers in pop, rock or alternative music.  Others just like the quality of the nylon string sound and use it on occasion.  Frankly, we are interested in working with any artist who plays nylon string guitar on stage or in the studio.  As I said, this is what inspires us to innovate and improve our instruments.  In most cases, artists contact us for an endorsement, or to simply buy a guitar or ukulele.  In other cases, we identify an artist who plays nylon string guitar and we approach them directly or through management.  We do this based on our own taste and interest in their music.  As the Cordoba team has a wide variety of musical interests, so do the artists we work with.

Your generosity and involvement in music education for our youth is admirable; you’ve been influential in creating interest and providing a platform for those who might not otherwise have the opportunity to learn and play instruments.  You recently donated 50 guitars to UCLA Community School’s “Guitar Hero’s” program which teaches music theory and history in the low-income neighborhood in addition to multiple other donations that have allowed musical opportunities for the underprivileged.  How important is your role as an advocate for music education as CEO of Cordoba?

TM:  If you believe that making music is a positive force in creating a healthy and happy society, then it makes sense to try to expose as many people to music education as possible, regardless of income level.  In fact, I would argue it’s even more important to provide music education to children in underprivileged communities, since they often have fewer opportunities and means to express themselves.  Music is a great equalizer, as no one cares about the background of the player as long as the music they create is heartfelt, authentic, and beautiful.  A great Mexican guitarist once said to me that without music, mankind would be impoverished and soulless, and I agree.

You have two young daughters who are also extremely active in music and arts.  How has your relationship with your family prospered as a result of your involvement in learning and playing music together?

TM:  We listen and play music together.  We discuss the instruments themselves, the pieces they play, and the “new” music they like.  Since music is important for most young people, it gives us a common interest and grounds for debate and discussion of who’s good and why.  Since they were six or seven years old, my daughters and I have played duets together performing for friends and family.  My wife sometimes cooks with one or more of us playing music in the background.  When that happens, it creates a sense of warmth, harmony and joy at home that we all appreciate.

TM:  I mainly listen to music via iTunes on my phone.  Much of the music comes from CDs that I purchased or music that I downloaded directly from the internet.  I do listen to a lot of music in the car because it’s quiet and very convenient with bluetooth and my iPhone.  Today I listened to Led Zeppelin, one movement of Beethoven’s 7th symphony and a new group called Imagine Dragons as recommended by my older daughter.  The “shuffle” feature keeps things interesting!