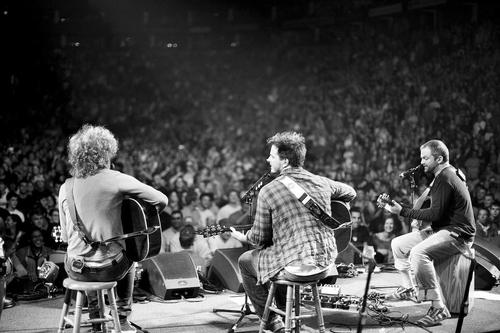 When you were first getting started as a touring band back in the late 90’s, Napster was one of the most substantial ways in which your music was spread, enabling Dispatch to become one of the largest grassroots rock bands with no major-label support or mainstream media coverage. Now, with all of your success, how do you feel about file sharing?

BC:  The same!  That it’s an incredible way for fans to look for new music, to discover songs and bands that likely aren’t on the radio or tv…  there’s a responsibility that comes with file sharing though, once you find something you love you should figure out ways to support the artist and buy their music… so burn away to share and sample music, then buy what you like!

The Last Dispatch brought over 110,000 fans together in 2004 and three years later you successfully sold out three shows at Madison Square Garden. Are there any plans for a show as monumental as these in the future? How can these shows be topped?

BC:  You really can’t plan for stuff like this, it just happens when you least expect it! As long as we’re enjoying playing and our friendships are tight, we’ll keep making spaces for crazy adventures like these to happen 🙂  we can’t wait to see what’s next!

You guys just completed your first European tour. After being together for almost 19 years (off and on), why has it taken so long for you to get across the pond? What made you decide to make the trip?

BC:  For us there’s just huge value in discovery and new adventures to keep things fresh and exciting… so fun the mystery of traveling to a new place and encountering fans and playing our songs and learning about their stories!  And it wasn’t until 2004 that we even realized that our music had leaked globally, and that was just as we were going on hiatus 🙂  so now it’s fun for us to hear that we’ve got fans and opportunities to play all over the place… so one country and continent at a time we’re really excited to get out there and meet more of our family of fans!

How different are the shows in places like Amsterdam, Berlin or Scotland in comparison to the states in terms of fans and crowd environment?

BC:  Shows are much smaller, but the energy is much the same!  We’re super blessed that it seems a Dispatch fan is a Dispatch fan anywhere in the world…  crazy fired up and singing at the top of their lungs!

You played a few shows with Shields, a funky little alternative pop group out of the UK while you were overseas. How did you get linked up with them and how much fun is it for you to witness another small band to grow from being your direct support?

BC:  We had some friends in the UK recommend them, so we checked them out and liked their sound… cool blend of old school Police like songs and harmonies with some new school instrumentation and energy. We love meeting new bands and getting to hear their sounds and stories, and anytime we’re able to inspire and share we’re so stoked to do it…

Your fifth studio album, “Circles Around the Sun” has seen extreme success since its release last month. Is there one song that you all agree is a favorite to perform?

BC:  Yea our favorite for sure is Josaphinecirclesgetreadyboysignofthetimesflag!

It looks like you guys had such a fun time making the video for “Not Messin” and your photos from this year’s EU tour are hilarious. Now that you have all gone through the ups and downs of being in a relationship, taking a hiatus and getting back together, is it easier to just have a good time and enjoy the ride together this time around?

BC:  Ahh yea we’re all having a blast. There’s immense freedom and joy bc we’re no longer putting any pressure on ourselves!  And we’re brothers, we know each other as well as sharing a name… so now that playing together feels like a gift, we’re just enjoying the ride and not taking a minute of it for granted.  We’re also complete jokers together, so you’ll rarely get a serious moment 🙂

Your vocal blends and harmonies seem to just mesh together so effortlessly. Was it this way from the beginning or did you grow to accompany each other over time. Being apart for so many years, did you naturally just go back to where you left off or did it take a while to get back together vocally?

BC:  Our voices have always blended together like we’re related? It’s crazy, pretty much a divine happening when voices meld together easily into one so we feel super fortunate.  And that’s one of the reasons we so missed playing and singing together.  Taking time away just made us miss each others’ vocal arrangements and all the layers, but it really was thankfully like riding a bike when we stepped back into the studio and on stage together.

You guys have continued to keep your fan base involved in your lives in so many ways. You recently gave 10 fans the opportunity not only to join you on tour, but also to gain experience doing volunteer work along the way. How does it feel to know that you are positively impacting so many lives?

BC:  There’s just a huge and beautiful responsibility to a platform like we have… at least we choose to see it that way.  We have no idea why we were given volume to our voices when so many desire it, but we’re super grateful… and entertainment draws people together so there’s quite a profound opportunity to gently direct all that fan power into making a genuine difference in people’s lives.  So why not leave a legacy behind and invite our family of fans into some of the stories that have inspired us to write songs and seek justice and equality for folks who don’t have as much volume to their voices and needs?  It’s just an epic blessing to to get to share so much with our fans and see them come along for more than just the music…

Whether it’s collecting books for your Amplifying Education campaign, donating proceeds from album sales to the Youth Music organization or enriching the lives of the Zimbabwean youth through the Elias Fund, DISPATCH is continuously engaging in raising awareness and funds to make change for children across the world. What are some other ways that you have used your position of influence to make change, whether it is for one individual or for the masses?

BC:  We want our fans to know that even one of them with one voice and one heart committed to a cause or issue can make a huge impact!  So it’s as much about empowering and encouraging our fans to stand up and speak to what inspires their hearts as it is for us to share with them what has captured ours…