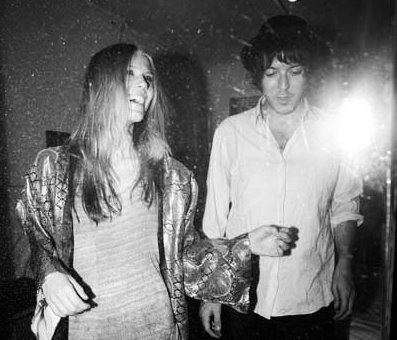 Ex Cops are the first band to be signed to Manhattan’s record store turned record label, Other Music.  Their debut album True Hallucinations is the first release to come from the label as well, a seemingly perfect representation of the record stores incredibly detailed curation of genre ideals with it’s explorative, atmospheric, indie-pop surfer rock vibe.  I had the fine opportunity to sit down with Brian Harding and Amalie Bruun of Ex Cops before their show at the Troubadour in Hollywood last week to discuss everything from our mutual interest in the film Waking Life, the state of music business today and not flying Air Berlin.

Can you elaborate on what inspired the album title True Hallucinations?

BH: It’s a political book from the early 90’s by Terrance McKenna who was a big practitioner.  He wrote this book and I really loved what he was about.  It always stuck with me and I wanted to use it in some facet and this seemed like the perfect opportunity.

Have either of you ever experienced a “true hallucination” – a lucid dream or consciousness altering state that has inspired you artistically?

AB: I have lucid dreams all the time.  And I have nightmares that are way too real.  The other day I woke up in the hotel room screaming at him and for at least 15 seconds after I woke up there was this man hanging in the air above me.

BH: And the best part is it was our bass player!

AB: You can definitely wake up in the middle of the night with a song in your head, something happens and you wake up and start scribbling and you look at it later and it looks like some latin or alien language because you were actually just waking up from sleep or between sleep and being awake.

When or where do you find yourselves most inspired to write?

AB: The hotel room.  It’s either that or watch Jerry Springer so..

What kind of feelings and emotions are you trying to arouse in your listeners?  You as the artists are our transportation device through the musical journey you create.  Where do you want us to go?

BH: It’s not my job to do that.  I guess the goal is to have you experience any emotion but to pinpoint any kind of feeling would be irresponsible.

AB: If our show can make people forget who they are and where they are, I think that’s pretty good.  And then It’s up to them, whatever they want to feel.

BH: The best shows I have seen are the ones that make me forget whats going on in my life that week.

AB: That’s what music is for anyway.

You started demos 2 years ago but actively, you’ve been a band for about a year now.  How have you evolved since day one?

BH: We’ve gone through a lot of incarnations, we first started out with two drummers on stage which didn’t work out too well.

You’re officially a touring 5 piece band now and Amalie, you’re the only girl.  How do you feel about that?  Do you wish you had another female around at times or does this work better for you?

AB: It should be mentioned that I’m not that “girlie,” I’ve always been a musician so I’ve always been surrounded by men…unfortunately (giggles). Honestly, I feel like I’m the most dominating person in the band.  Also we’re like a band of dorks,  we’re not cool.  And we have so much fun on the road, it’s hysterical.  That’s what it’s all about.

The video for “Separator” was filmed at your good friend’s bar in New York where you, Brian, used to work.  Was there a transitional moment for you – working as a bartender to full time touring musician?

BH: When we started the tour. (laughs) There’s still not a lot of money in touring so..

AB: Most of us still have jobs. Bands that are way bigger than us have jobs.  That’s where music is today.  If you love doing it, if you wake up in the morning and you only want to do that, you gotta do it, you can’t worry about the money.

BH: People will come up and say, “you’re working, too? You just played the Bowery Ballroom!” And we’re like, “the Bowery Ballroom does’t pay my rent!”  The lead singer of The Zombies is an insurance agent, so there you go.

Brian, in a previous interview you stated that you only listen to Neil Diamond and Neil Young, which I’m sure is a stretch.  Amalie, who are some of your artistic inspirations?

AB: I grew up listening to a lot of classical music because I played the violin.  Nordic composers – Grieg, a big Norweigan composer, very romantic.

AB: I love Mariah Carey.  There’s so much.  The problem with me is I’m all over the place.  My real passion is classical music and metal.  I would’t say that influences my own personal music, the genre of Ex Cops, that’s probably closer to Mariah Carey than it is to black metal.

A friend who has seen you perform recently suggested I ask, why do you wear sneakers on stage?  Is there a story behind that?

AB: What show was she at?! (laughs) I don’t know, I have this thing where if I put on something fancy, I have this urge to put on something ugly whether its chunky shoes or whatever.  I think the juxtaposition of wearing a long satin skirt with sneakers is really cute.  But I can see where a lot of people don’t.  And he like it’s a lot so..

Tell me about the name Ex Cops.

BH: It’s a boring story.  I read the New York Post a lot and everyday there’s an article that says “Ex Cops Accused of Something.”  We have a really bad police system.  I’m sure the LAPD is perfect.

AB: I wanted us to be called Money and he was like, “no we’re going to be Ex Cops.”

What has been the biggest challenge for Ex Cops so far?  Something you’ve had to overcome?

AB: We’re sober.  At one point, it was like either that or no band at all.  But after we have overcome that, things have been a lot smoother. It really isn’t that big of a challenge.

AB: Not eating fucking gas station food is the challenge.

Tell me about your tattoos, Amalie.

AB: This is from a book that my mom bought me when I was a kid, The Little Prince.  Antoine de Saint-Exupéry is the author.  It’s a snake eating an elephant.  He used the drawing of an indicator of who is a grown up with no imagination and who can see the snake.  Obviously no one can see the snake.

Before we ended our session, there was one more thing that Amalie wanted to share, a bit of Ex Cops advice: “Don’t fly Air Berlin!”  It’s coming from compassion and love for human kind.

You can find our first interview (Chapter One) with Ex Cops back in January here.

Look for Ex Cops in a town near you here.