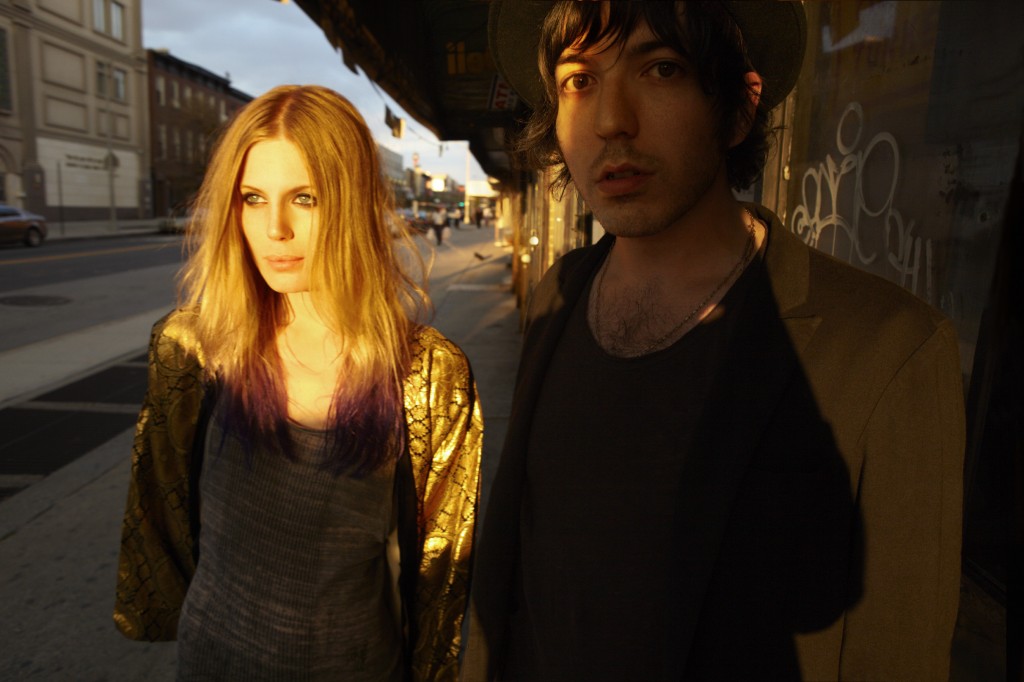 Here’s another band from New York City that hangs out in records stores and listens to Neil Young.  They’re probably a trendy two-piece with a really hot girl in the band right?  So far, its true. Although my introduction may make them sound like they’re typical, there is actually A LOT of substance on Ex Cops debut album True Hallucinations!  They draw comparison to arguably my favorite band, The Stone Roses, and have flavors of other 90’s brit-rockers James and Kitchens of Distinction.  Let’s call it Brook-Pop?  Ok, we won’t.

The guitars on this album are fantastic.

I have a big red circle on my calendar around their show May 8th at the Troubadour.

Interview was done by Matthew Downes and Charissa Lock with Brian Harding (BH) of Ex Cops.

Having a record store as your label seems unconventional and eloquent all at once.  The concept might be one of the future.  Tell us about your relationship with your label home “Other Music Recording Co.”.

BH: Other Music has been one of my favorite stores since I was a teenager and a tourist in New York City. They helped me pick out some cool stuff when i was 15 (Black Heart Procession) and I have visited the store ever since.  It’s super weird and cool to be a part of their label.

Among your influences you list Neil Diamond, (Neil) Young.  I’m assuming its Neil Young.  What current artists influence you?

BH: No, I only listen to Neil Diamond and Neil Young.

You’re embarking on a multi-city tour with Bleached.  Besides playing shows, what’s your favorite thing about touring?  Are you anticipating a certain city over another?

BH: I’m actually in the works with Yelp about a tour diary about the best gas stations in the U.S.  On the Run in Tucson is in a dead heat with the Houston BP.

Do you believe in streaming?  How does Ex Cops consume music?

BH: Any way for people to hear music is good. We mostly listen to compact discs.

Your symbol for the album cover of True Hallucinations is an entrance of sorts.  When listening to this album, where should we be transporting to?  What’s beyond the opening?

BH: You should stay inside your mind’s eye. Beyond the opening is more reverb.

Your video for “Ken” poses a picturesque moment that all music lovers long for, sitting back and relaxing while listening to good tunes amplifying through a giant speaker.  Of course, your elusive main character is quite frustrated at the end.  Why the destruction?  Is that the message?

BH: You should ask Paul Westerberg.

Many vintage photos seem to come up (autographed “James,” your Myspace picture), are these from old albums of yours with significant memories, influences or connections attached?

BH: These are all friends who I can’t mention anymore.

There’s a photo on your Twitter getting ‘caught’ watching Justin Bieber on SNL.  Is Bieber a guilty pleasure of yours?  If not, do you have any artists that you secretly listen to, headphones on or waiting until there is no one in earshot?

BH: No, i hate Justin Bieber, but it’s a phenomenon and I like that.  I still listen to New Radicals.

Getting noticed is half the battle.  Especially through a sea of noise (literally and figuratively) in music these days.  We work with a lot of young, aspiring musicians at ktc.  What’s one good piece of career advice that Ex Cops can share?

BH: We’re young and aspiring too, so I don’t have any advice at the time.

Catch them on the road this spring here.