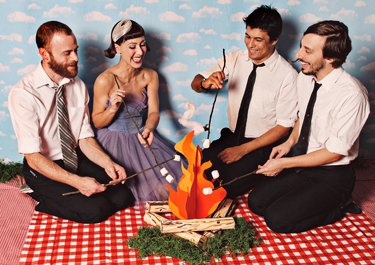 As this four-some from Texas made it a focus to bring the live feel into their album sound on their fifth album, released last month, they also made a point to continue to capture their psychedelic sound with the mesmerizing theremin instrument (something you should definitely research if you’re scratching your head in confusion).   KTC had a few questions about touring, the music industry, and newest album to ask the friendly and upbeat guitarist/bassist/keyboardist, Josh Lambert.  Make sure to check their tour schedule to see if they’ll be playing anywhere near you!

Interview by Charissa, Aurora & Matt with Josh Lambert of The Octopus Project

Being labeled alongside such genres as American Indietronica and Experimental pop, can be a good thing or a bad thing for a band.  What genre do you consider The Octopus Project and why?

JL: Generally, I think, we choose to not really think about it.  When you start thinking, “Hey, we’re indietronica…” that just forces you into a box, and you start making decisions based on what’s supposed to fit into that box.  Really, anything goes with this band.  We’re up for trying any idea.  We’ve been grouped into a zillion different genres (usually, whatever is popular at the moment that uses keyboards) — IDM, post rock, electroclash, indietronica, chillwave, etc., etc.  It’s all kind of pointless to me.

Your newest release Fever Forms [Peek-A-Boo Records] gives off a certain vibe of accomplishment amongst daily disappointment and struggles, a motivational push through the bruises and scrapes life so easily offers.  I believe that music can cause different reactions to the listener than just the intention of the creator.  What was your personal underlying theme of these twelve tracks?

JL: It’s awesome that you felt that vibe from our record!  We like to leave things up for interpretation & keep it as vague as we can.  I would much rather the listener put their own feelings and thoughts into what we’re doing than have us spell things out for them.  Honestly, there’s nothing to spell out.   I think each one of us in the band has different feelings about the songs.

I can’t speak for everyone because we never sit down and discuss what a song or album needs to convey — we either are attracted to how things are turning out or not while we’re writing — but, for me the theme of this record was a gut reaction to do the polar opposite of the last record.  I love that album (Hexadecagon [Peek-A-Boo Records]), but it was it was a much more methodical/heady experience, and I was really excited to  just kind of rock out.  Every show we play, someone tells us that they love our records, but LOVE our live shows because they’re so much more intense, and the records don’t really reflect that.  Some people are even surprised that we play guitars and drums live — which blows my mind.  So, I was really drawn to making this record a much more intense experience than the previous ones.

Artists are constantly, if not always, influenced by others and there were a few tracks where I could pinpoint such influences.  Am I correct in assuming a little Madonna’s “Vogue” on “Choi Sighs” and Tokyo Police Club’s “Your English Is Good” on “Death Graduates”? Were there other, more general,musical influences on Fever Forms?

JL: Hmmmm….  I do love “Vogue,” and maybe its influence snuck into “Choi Sighs” somehow.  I haven’t heard that song in forever though.  I’ll have to listen to them back to back!  We did a few shows with Tokyo Police Club a billion years ago & they were super cool folks, but I haven’t heard the song you are referencing.  Maybe it’s been living in our brains since we played with them & just now jumping out!

It’s hard to pinpoint any other general influences…  We’re always listening to a zillion different things — 70’s soundtracks, minimal dance music, tons of Bollywood, complete noise…  I think we’re drawn more to sounds and qualities than anything else & try not to go into writing anything with a specific influential idea in mind.  100% of the time, that ends up sounding ridiculous & we abandon it pretty quickly.

The Moog, or more accurately, Theremin.  Having to do a bit of interesting research on this psychedelic hands-free instrument that is seen in your music video for “Sharpteeth,” I am curious on your introduction to it?  How do you learn to play something like this?  In the age of synthesizers and korgs, it’s refreshing to see an offbeat, maybe even classical, instrument being reintroduced to new crowds.

JL: Yeah!  Yvonne and I saw the Theremin documentary sometime in 1998/99 and were immediately obsessed with the instrument.  We bought one from Moog and started messing around with it — just making noises.  After a couple of years of us all “playing” it, Yvonne decided to actually learn how to make melodies & practiced like crazy for a while.  She would usually just play scales or play along with classical music — anything with a melody that a violin could play.  She has a knack for it that none of the rest of us have.  It takes some pretty intense concentration & holding your body incredibly still; a quality which she gained from years of studying ballet.

Sticking with the music video, in “Sharpteeth” bandmembers are seen with the furry masked faces.  Lately we have seen artists covering up in music videos, twenty one pilots’ “Guns for Hands,” and even Hannah Hooper in the latest from Grouplove (“Ways To Go”).  Knowing you all have different reasons, what artistic approach did you have for this colorful and friendly disguise?

JL: We’ve been using masks in stuff forever.  I have no idea why.  Maybe it has to do with anonymity?  None of us are really excited about being the center of attention and masks are a good way of leveling the playing field.  They’re mysterious!

In August, you’re embarking on a 30 date tour in North America that will bring you from New Orleans to Washington DC, Los Angeles and New York that finishes in Kansas City.  What will you be listening to on those long trips?  Or is it headphones for everyone.

JL: We try to listen to as much new (or new to us) music as we possibly can!  Unless something is totally mind-blowing, we don’t listen to it more than once or twice though.  Those long drives can get pretty tedious, so it’s good to keep things fresh.  Whoever is driving gets to pick what’s played.  Lately, we’ve been listening to a ton of podcasts and books on tape.  Sometimes people go into their own headphone world, but I’m always excited to see what someone else is going to play on their day to drive — sometimes that’s the best way to find out about new stuff!

During these live shows, do you ever let loose in a jam and improv when you’re really feeling a song or do you stick to the structure and play it as it is on the record every time?

JL: We don’t always stick to playing the songs exactly as they are on the record, but because we have so many samples, sequences and video being triggered, it’s a little hard to stray from how we’ve practiced them.  Having said that, though…  we sometimes deliberately leave spaces in songs that can be loose and just go with however we’re feeling live.  But, it’s a planned looseness.

The artwork for your album and posters has a common theme of psychedelic shapes and prisms, possibly Illuminati influenced, maybe not. Can you tell us about what inspires the artwork and how it represents the Project?

JL: I can see the Illuminati references.  Honestly, that didn’t cross my mind at all when we were working on the album & surrounding art for the new record.  I think we’re just drawn to geometric shapes & mystery.  You never know how things are going to turn out when you start working on something, and usually go through a million iterations.  We always pass stuff back and forth — whether its music or artwork — and you kind of have to just go with the flow of where things are headed, and not try to force any external ideas into it.  So, I really don’t know where any of that inspiration comes from.  It was what we were drawn to at the time.  Eyes & pyramids are rad!! 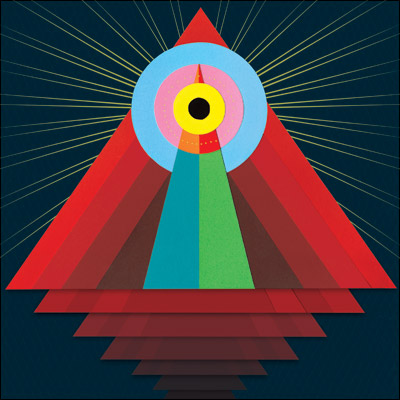 This year has quite a few fantastic releases (Vampire Weekend’s Modern Vampires of the City, Phoenix’s Bankrupt!, The Strokes’ Comedown Machine, etc. etc.).  What is your favorite album to have come out this year?

JL: I had never listened to Vampire Weekend before, but I’m really loving their new record.  It just sounds totally nuts for being such a high-profile album.  A friend of mine played their song, “Step,” for me a couple of months ago & I was hooked.  I just listened to the record, ‘We are the 21st Century Ambassadors…” by Foxygen & thought it was pretty great.

Sustainability is half the battle in the music business and approaching your Crystal (15th) anniversary next year, I’m sure you sense a tremendous achievement. Kudos and Congrats!  We work with a lot of baby bands here at ktc, what advice would you give yourself back then that you know now?  What advice would you give to a young aspiring artist in the current music industry climate?

JL: Thanks!  We’re pretty excited to get to continue to be doing what we love!

As far as advice that I would give myself…  I would tell myself to just enjoy the whole ride more.  I think earlier on I was way more freaked out/focused on making things “perfect” and worried WAY too much about all of that stuff.  Details are definitely important, and you have to be focused to get anywhere, but  you also have to enjoy it while it’s happening.

And, advice for folks just starting out…  I would say to just follow your gut.  If you like something you’re working on, go for it!  Don’t ever worry about what people will think, and definitely DON’T ever try to do what’s currently popular.  Just do what excites you!  I’ve seen a million bands give up because they’re trying to sound like Arcade Fire (or whoever), and no one cares about them.  They’re not going to care about that kind of band because there already is an Arcade Fire.  Just do your own thing!  If you are excited about what you’re doing, and it’s something new, chances are that other folks will be excited about it too!