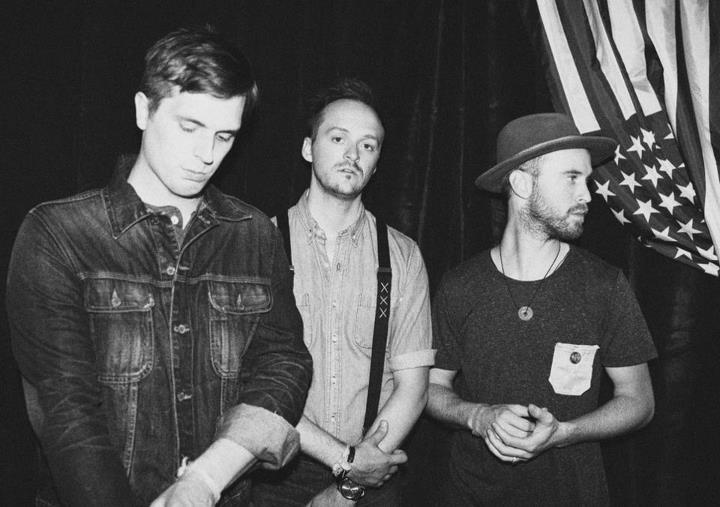 Paper Route is a 3 piece out of Nashville, TN.  We caught up JT Daly and Chad Howat to discuss streaming, synths and Seventeen magazine.  They have a new album coming out September 11th called The Peace of Wild Things that you can pre-order here.  If you want a taste, check out the single “Better Life” they released earlier this year.

This interview is by Matt & Charissa.

The audio file slash video for new track “Tamed” is beautifully dark, featuring the lovely Cacie Dalager. How did this collaboration come about?

JT: We had just done a tour with Now, Now – and I slowly fell more and more in love with Cacie’s voice every night. When we got home I started in on an album as a writing exercise and also to keep my headspace from sinking. I read the “Little Prince” one night and there’s a chapter on taming things… and it haunted me. The rest happened pretty fast. I wrote the song and called Cacie. Told her I had to have her voice on this track. That we had -tamed- one another. Mailed her my typewriter lyrics, and she emailed me the track back. It was done.

Are streaming services pushing or pulling Paper Route? Do you feel they’re giving you a push or is it pulling money out of your pockets?

CH: Streaming services probably are doing more pulling than pushing, honestly.  We don’t have many people telling us that they discovered our music and became fans through a streaming site.  That being said, we don’t have a whole lot of money coming into our pockets typically, so we don’t feel like we’re missing out on too much.

Whats your favorite new instrument to come on the scene since Absence? Any new/old synths or maybe an old piano you re-acquired or other instrument that inspired you?

CH: We used a handful of synths on this album.  The Roland JX8P, Yamaha DX7, and the Virus were a few of the hardware synths we used.  Gavin has an early 80’s Gretsch kit that we used for a lot of the album.  I used my ‘62 P-Bass reissue.  I believe JT used an old Fender Blues Jr. and the very first Divided By 13 amp for most of the guitars.  Honestly, getting a new computer was inspiring because we got to spend more time creating music and less time restarting it.

Having our own thoughts on what genre Paper Route is in, I’m curious to hear a creator’s take on how your music is defined.

CH: It’s difficult defining your own creation.  Once you’ve been defined you want to totally go against that definition and surprise everybody around you, not to mention yourself.  That being said, when I write, I want it to sound like I’m throwing a microphone into Heaven, meaning, I want it to sound otherworldly, majestic, overwhelming, massive, and calming all at the same time!  I think JT and Gavin gravitate towards the same aesthetic when they are creating as well, so we tend to be on the same page.  We have a heavy emphasis on melody and rhythm.  Our songs are typically very beat heavy.  We all program beats a lot and Gavin is a fierce drummer.  I try to outdo him on the programming side of things and he always tops it on real drums.

The biography on your website talks about the location of your creative processes being an old plantation house respectively given the name Joy Mansion. How did you acquire this? Is it a home, or a studio, both or neither?

CH: Joy Mansion was one of those fluke things we found on Craigslist.  We saw it and signed up for a year lease the next day, not really realizing what we were getting ourselves into.  It was a massive, three story house.  6,000 square feet on 2 acres.  We could all be working on music non-stop without a problem.  We rented out other rooms to friends of ours who were in bands.  It was a very inspiring place and we had some of the most fruitful recording experiences there.  The place was haunted, though.  It got to the point where it was difficult to pull an all nighter there.  After we finished the album, we decided to leave Joy Mansion, but the memories of that place are unforgettable.

From an article for Seventeen magazine (interview completed by past Paper Route member Andy Smith) to your emotional instrumental masterpiece, “The Music” for the film “(500) Days of Summer” allows one to think you’re not quite settled on one fan type. What is your view on who should be listening to your music?

CH: We’ve played shows for years now, and I still could not tell you who our typical fan is.  It means it has been very difficult for marketing people to know what to do with us, but that’s okay.  We just make honest, melodic music that we hope will connect with people.  I imagine the fans we attract are a little more in touch with their emotional side, are probably passionate about something, think about love and fear and God and like to sing in their cars.  That’s who we are, anyways.

You just finished a high-energy filled, sweat-soaked headlining performance, habitually what do you do next?

CH: We immediately go out and talk to people.  It’s fun meeting people from different cities and hearing people’s stories.  After we pack up for the night, we usually head straight for our hotel, which will usually be at least an hour away.  Our minds are already set on where we will be getting coffee the next morning.

You are doing a widespread world tour this summer/fall. Where are you most excited to go?

CH: I can’t speak for the other guys, but I am really excited about touring the West coast.  Geographically, it is much easier for us to hit the MidWest and East coast, but on this upcoming tour, we are doing California, Oregon, Washington and the rest of the West.  The scenery is gorgeous and the weather is always amazing.  People are a bit more relaxed there, which will be a nice contrast from our shows in New England.  I need that, because I can be pretty high strung sometimes.

Name one thing that Paper Route does together (as a group) that doesn’t involve music?

CH: We go to Cracker Barrel.  We hang out on each other’s porches late at night and talk about life.  In the fall I usually have bonfires almost every night and I always invite the guys.

CH: One artist we could agree on is Frank Ocean.  I love his Nosalgia/Ultra mixtape and JT loves his new album.  Gavin probably loves both.  We will be listening to it in the van, for sure.