Interview: Matthew Curry and the Fury 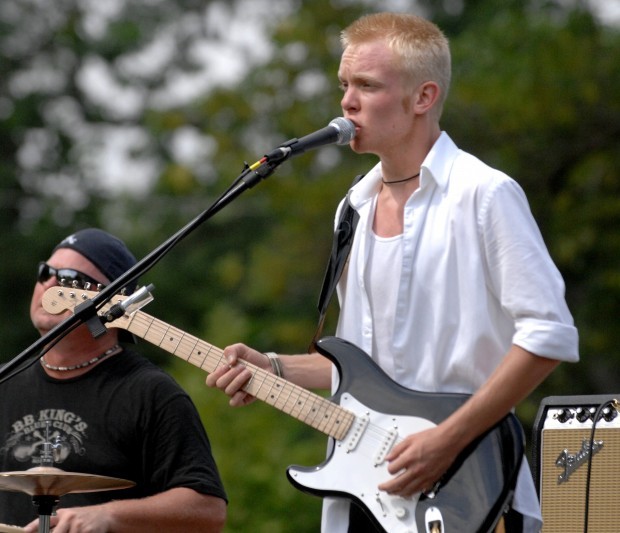 You might be surprised to learn that he’s just 17 years old, especially when listening to his first studio album If I don’t Got you. With a voice that echoes well beyond his years and guitar playing to match, Matthew Curry, alongside his band The Fury (Greg Neville on drums and Jeff Paxton on bass), is a part of the next generation of blues music and he is just getting started. Already a veteran, playing guitar for nearly 13 years, this  small town midwest boy is in preparation for the road ahead – literally. With goals to share his music with the world, Matthew Curry is gearing up for his next album and life as a touring artist. But only after he graduates high school.

At what age did you first pick up a guitar?

MC: I was four years old when I first picked up the guitar. My parents got me a little one and had to re-string it since I’m left-handed.

How did you begin playing blues music? Were you influenced by the music your parents listened to or was this a genre that you identified with and chose to pursue on your own?

MC: My Dad was into a lot of blues and rock genres when I was young and it just seemed to catch my ear.

What brought you together with the Fury (Greg Neville, Erik Nelson and Jeff Paxton)?

MC: I was in need of a band a couple years ago, since my old band split up since they lived a little far from Bloomington. So Jeff and Greg got the call. And we’ve been playing together ever since. Erik was the producer of our CD, “If I Don’t Got You”, and we all loved his work and keyboard playing (and accordion!) so that’s kind of how that all happened. These guys are all really talented and I’m really lucky to have them playing in The Fury.

Is it difficult for you to find musicians your age that are also playing blues music?

MC: Yes, most people my age like Rap, Country, or heavy metal, but every now and then I run into someone my age that loves it just as much as I do.  Hardly anyone at my high school even knows I have a band. Some of the teachers do, I guess, but the kids can’t get into most of the places we play.

Who are you listening to right now? What’s something that might surprise us?

MC: There’s a ton of people that I listen to, something that might surprise you is that not only do I listen to blues, and blues/rock, but I really like the old country, chicken picken type stuff.

You’ve had the opportunity to play with some great musicians so far in your young career. What recording artist were you most excited to work and how did that experience help you grow as a musician?

MC: The one that I am always the most excited to work with is Bryan Lee, he’s one of my biggest inspirations and a really good friend as well. He’s overcome a lot of adversity and has encouraged me to keep working hard. Ronnie Baker Brooks is also such a great musician and always invites me to play with him when he’s in town.

What is your feeling about blues music in mainstream society today?

MC: I think that blues has a chance of coming back in a newer form -old delta or Chicago blues may not do as well as it has in the past, but look how Stevie Ray Vaughn brought it back in the mid to late 80s. I think it will take someone to re-invent it like he did to make it popular again. Maybe some mainstream artists picking it up too, or some great exposure. I’d like to play on Conan, or something like that.

Blues music has traditionally been written about the woes of a harsh reality – lost love, oppression, and difficult times. What types of experiences have inspired you as a lyricist?

MC: The basic things like you listed, loosing a girl, difficult times, things like that. Good lyrics that aren’t cheesy take a lot of thought.  The band and I have been writing things together lately and have come up with some really great songs.

It’s amazing to see someone of your age come in and dominate a genre that is typically (or stereotypically) played by older musicians. How can you as a young artist use your talent and position as leader of your band to influence other young, aspiring musicians?

MC: Well I strive to do my best and always stay humble, and just keep playing my music.

What’s next for Matthew Curry and the Fury? Your album, “If I Don’t Got You”, was released last year. Are you writing for your next album, planning more touring beyond the Midwest, or continuing to build a name for yourself playing shows and festivals in your area?

MC: I’m in my senior year of high school, and we are getting ready to start our next cd. We’re taking some time off from gigs in November to get back into the studio. We had a great time this summer at some awesome festivals and hope we can expand on that too. And then hopefully I can tour when I get out of high school, sharing this music with people across the world!