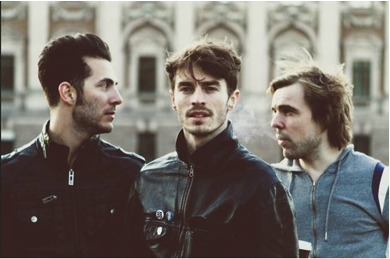 The smokey smell of barbeque instantly found its way to our noses as we entered into the final food option on a busy Saturday night in Pawtucket.  LJ’s BBQ wasn’t an ideal spot for the healthier vegetarian style New Politics had desired that evening, but it certainly smelled delicious.

As customary male banter ensued, the energy level peaked in correlation to the second show of the tour hosting tracks off of an anticipated sophomore album for Brooklyn band, New Politics.   Amongst the nearby families’ conversations, bubbly waitress, and lack of food promptness, I began asking David, Soren, and Louis about music trends, show catastrophes, and their untitled album.

Unsure of who would start answering my questions, I was pleased to find they all had opinions and comments to share.  My first dealt with their move from homeland of Denmark to New York, wondering what the most surprising trend in American music they found upon moving to Brooklyn.  After giving much reciprocal thinking, they equally concluded that the focus points for Scandinavian music and American depended on either lyrics or melodies.  Besides the heavier electronica trend, Louis noted, “The melodies are much more obvious, constructed to be the focus,” whereas in American music, lyrics tended to have more attention being made to them.

David went on to share that foundationally, America’s involvement in the emo, pop-punk music trend was something he knew nothing about until much later, “It’s a different way of writing and creating music,” that he feels has some of an effect on other musicians he knows in New York.

The amount of deep thought that had gone into the first question created an image of artists who are aware and intrigued by their profession.  This led to my next, re-iterating how many artists add one, or many, instruments when creating new albums and asking if they found themselves wanting some new sounds for their second.  Three “yes”s gave the confirmation.  Soren continued, “I’ve played a piano for many, many years, so a guitar was a very new instrument for me – so for adding piano, I think it was a very obvious change.”  David shared the additional talents for each of them being placed on this album, beyond Soren’s guitar-playing, David’s headstands, and Louis’ good looks.

Psychologically, there was also a transition of who they were as individuals. Speaking openly, David shared how they had gone through a difficult time upon their move, transitionally speaking; separation of relationships, culture shock, which have all made its way, in some form, into their new songs.  “Of course we’re like anybody else.  We have goals and ideas that are fixed and hard to break and we build them ourselves.  We could have put out an album like our first, but we learned a lot from all the bands we toured with (30 Seconds to Mars, Neon Trees, etc.) and all of the things we have added to our album are a reflection of all of this we have gone through.”

As club sodas were passed around, I had time to put into perspective the idea of relocating in another country and found myself being able to answer the next question I had for them.  Introducing it a bit differently than I had originally planned, I carefully asked whether they would permanently return to Denmark in the near future.  The exact opposite, but similarly ominous were the “no’s” (specifically from Louis who isn’t from Denmark to begin with).  All that they have gone through to get to the dream they are now living, involves no plans to backtrack.  Soren felt that maybe down the road to start a family, Denmark may be a possibility, which lead to them agreeing that having a second home base in Denmark would be ideal, if they had the money to do so, of course.

Having my own ideas about what I felt an American crowd would be like as opposed to a Denmark crowd came across resistance when Soren and David quickly responded that they were the same.  Depending on how open the city is, “a crowd is a crowd, if you like the band you go nuts, if you don’t, you don’t” began Soren though Louis couldn’t have thought more opposite.  Transferring to a more devil’s advocate approach, David shared how in Europe, “they go just as crazy, but I’m not sure they understand 100% of what’s going on and I think they’re there to have a good time.”  To which Louis could agree to and added, “when you play in the States, you get a crowd that’s not always looking to have a good time.  They’re looking to hear what you’re saying, looking to see how good you are on the guitar”- to which Soren interrupted with, “then I’m f*cked.”  Laughing it off, he stayed immobile on his views.  They were all able to agree with Louis’ concluding statement that due to them being who they are, people are able to feel the sincerity in their energy and the fact that they are always having a good time, which ends up being contagious. 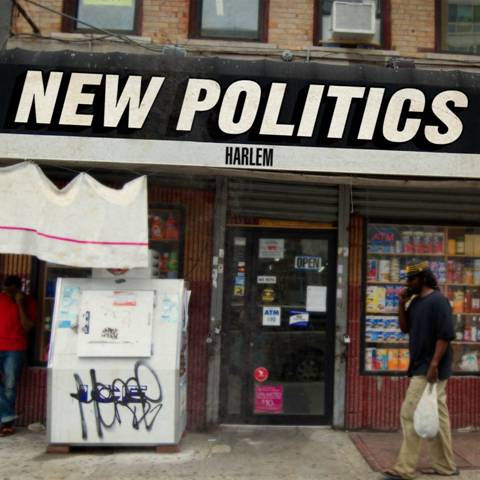 With the food still not having made its arrival, LJ’s “Eat it n’ Beat it” motto seemed to be quite farcical.  Harder questions out of the way, I started back in with a personal question concerning hobbies, in which fingers pointed rapidly to Soren.  Listing fantasy/sci-fi games (WOW, Mass Affect) as a way to “disconnect with the world,” he admitted his playing of Need for Speed:  Hot Pursuit was only in reflection to their single “Yeah Yeah Yeah” making its appearance in the popular driving game.  David, on the other hand, noted his sometimes addictive behavior with gaming, namely Oblivion.  Louis, also falling into gaming like the others, listed Need for Speed and Call of Duty type games as his preference.

Albums of 2012 was the center of my next questioning, and Soren was quite letdown that AWOLNATION’s album didn’t actually come out in 2012 (though it may seem like it when thinking of singles).  Going for another pick was easy as fun.’s Some Nights was announced.  As for Louis, “I’m into everything, but Rihanna’s record was the best one I’ve heard this year.”  David, a fan of singles, had the most difficulty, and was pardoned with the notion of an album he heard this year, sharing The Temper Trap’s self-titled had been on repeat.

Of course being on topic with albums, the questioning about their newest release was inevitable. Release date?  David divulged, “March,” more towards the end of the month, though no official date has been sent.  My follow up of, title name, was even of more unsure nature, “I don’t know how key were are on it, we’re trying to look at it from different aspects and be big about it.”

With the performance time ticking closer and closer, and lack of food being served, taking it to go became their best option.  Feeling quite badly for them, the conclusion to the interview made sure to take their minds off of hunger.  “Last night,” was the immediate answer of Louis after being questioned of the scariest moment for them on stage.  “We hadn’t played a show in over a year together, we had new songs, new crew, new track rig, and it was our first show of the tour, probably the biggest show of 5,000, with no sound check.”  It all worked out well, so I was onto my next part of the question in inquiring about physical frightening situations on stage.  Soren and David shared a story that I still question their seriousness of it, as flipping and body parts made up much of the event.  They were able to mention a time when David went to do a backflip off a giant monitor, and after being successful saw the face of the crowd and realized the monitor was on wheels, “I got really afraid for a second, if it had fallen onto the crowd or something awful.” Then of course the “less” horrifying moments; guitar to the head, hitting a monitor with his head that resulted in blood dripping down his back. 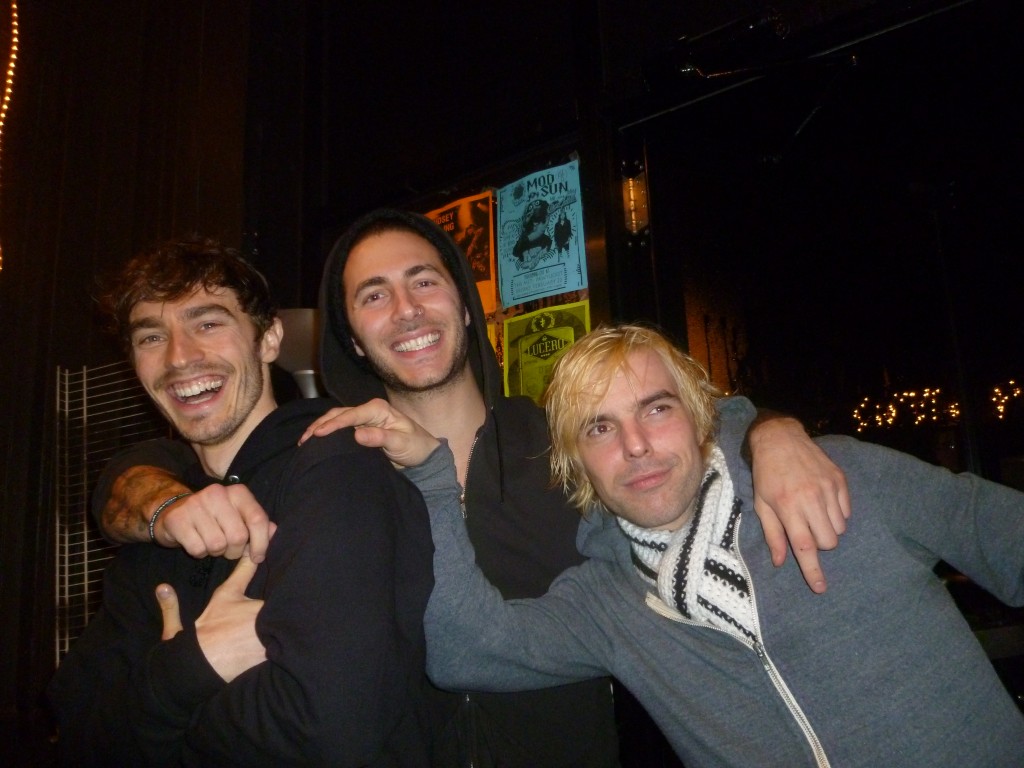 As Styrofoam boxes were slowly being handed out, my final question raised the curiosity of the Brooklyn music scene having any effect on their album.  “It’s all influenced by everything going on in our lives and as much as artists in general are always inspired by things going on around you,” shared Soren.  He felt that specific to the city, “there’s a lot of competition, my music is better than yours,” which leads him to not going out to many shows of artists he’s not familiar with.  A music scene he prefers is Los Angeles and shared it may be someplace he wouldn’t mind moving to…though it could just be the hunger having gotten to him.

All this talk of moving seemed to lead back to a shared feeling of going through life, as if your heading down a path and taking things as they come, never knowing where you will end up.  As for New Politics, they ended up in Pawtucket that night, playing an energy-filled, crowd-singing venue, gathering positive reaction to their newer singles – just as they would have hoped.