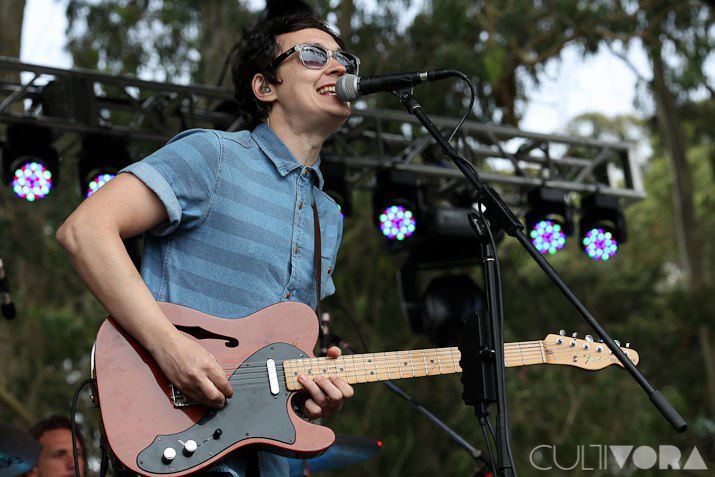 This interview is by Matt & Charissa with lead singer, Richard Sauberlich.

What a year for you guys.  Lollapalooza, Outside Lands, rampant play on American radio…How’s it feel?  Fall in love with anything animate or inanimate on your U.S. travels?

RS: Yeah its been a pretty crazy 6 months so far. Feels great to be out in the States playing shows and meeting people who’ve connected with the new record. I’ve certainly fallen in love with air conditioning since being out here – been getting temperatures above 100 degrees – we’re all from London, so its kind of a mental heat for us over here!

What singular piece of gear (instrument, recording, etc.) inspired The Looking Away the most?

RS: If I had to choose just one – then I guess it would be the laptop. We wrote this record in a very different way from our first. With each of us on a laptop, normally working on 5 /6 songs at the same time and passing round ideas in the studio rather than sitting in a room and thrashing it out live.

Your single “Strange Attractor” emits multiple emotions.  Is this a person you’ve met in passing before or are you with this person or both?

RS: With Strange Attractor we just wanted to make a tune that felt a bit of that euphoria – its about the chemicals racing around your bloodstream, and that initial rush – with synapses firing off and the whole big firework show exploding inside you when you first meet someone.

Were you aware of the thoroughbred horse Animal Kingdom last year and his improbable win in the Kentucky Derby?  (using your Facebook as a starting point you were both born around the same time in 2008)

RS: Not until the day after the race – we got a couple of messages on our facebook but I’d never heard of the Kentucky Derby so just thought it was spam! – then the next day we saw in the UK news that a horse called Animal Kingdom had won and that it was 20 -1 odds.  Gutted!  Would definitely have stuck £20 on it if I’d known – and we could have had a good night out! Has that horse won any more?

Editors Note: In the second leg of the 2011 Triple Crown Animal Kingdom came up short, finishing second, to Shackleford.  He came back to run in the Belmont States 3 weeks later and after traffic trouble, that almost unseated rider John Velazquez, he heroically rallied to finish 6th.  The injury required surgery and months of rest pointing him to the $10,000,000 Dubai World cup this past March, but the injury resurfaced forcing him into an early retirement at the age of 4.

Speaking of Facebook, it is extremely tricky and almost hacker’esque trying to find the band on there, as well as regular search engines (i.e. Google).  Are you aware you aware of your competition with the Disney Theme Park (as well as the now champion thoroughbred horse)?  Any influence/thoughts to change the name of the band?  Also, whats the inspiration behind A/k the band name?

RS: A few people have said that – but if you type in Animal kingdom music or band then I think its pretty easy to find us. We didn’t know of the theme park til a while after we’d settled on the name – or the horse, so no plans to change it at all.

The name came about as I was reading some desmond morris books at that time “the human zoo” & “the naked ape” – looking at how we have evolved to living in cities and things like that. Around the same time I saw a picture in a childrens illustrated bible of Noah & the animals floating out at sea alone with each other and the two things fused together and the name stuck.

The list of influences you have is quite a mixed (and large) blend and is absolutely reflected in your music.  Are all three of you into the plethora of different sounds, or are these influences separated into genre based on the likes of each individual member?

RS: We’re all pretty much pushing in the same direction when we’re writing – we all tend to like in general the same kind of stuff for sure, which makes things pretty easy going when we’re writing – we’re def not having pitched battles for a 3 minute slap bass solo or anything – obviously theres bands or sounds or records that only one of us likes but in general we’re all pretty much on the same page

Is your music used for hope or healing or both? Do you have aspirations for your listeners?

RS: You’d have to ask the people who listen to it for an answer on that one!

You have some of the best names in the business helping perpetuate your machine. [Label (Boombox/Mom&Pop), management (Qprime), Publicity (Big Hassle), Booking Agent (CAA)]  Bands don’t get this lucky without being talented and determined.  Can you source a breaking point for Animal Kingdom?  Was it a show, song or something else?

RS: It was more a slow successive series of small steps really – one song followed another, same with the shows – and we gradually met people who saw something in us and helped us take another step forward – was pretty organic and natural – certainly it wasn’t a kind of overnight thing where we met, wrote an album in a week and then the gates magically opened. 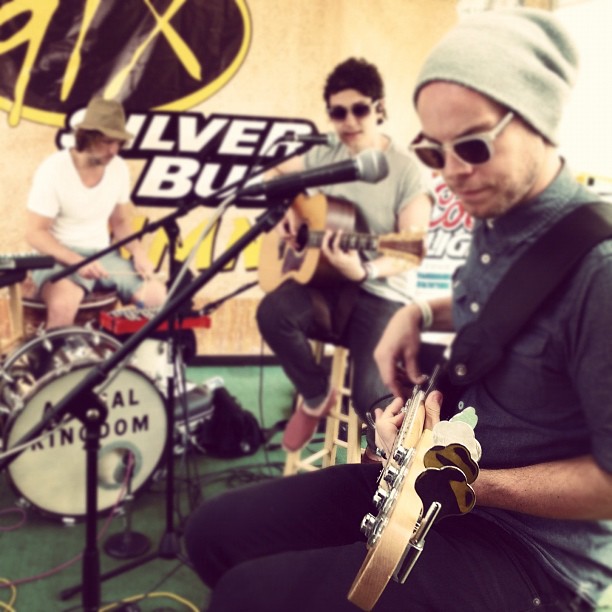 What’s one non-musical thing that Animal Kingdom does together that doesn’t involve music.

RS: Drink! – pretty much everything actually – we’re all best mates and live right next to each other so when we’re not in the studio we tend to be hanging out anyway

RS: ANIMAL KINGDOM’S THE LOOKING AWAY feels familiar, like I’ve heard it before somewhere…

Special Thanks: Cultivora for the photo of Richard from Outside Lands.