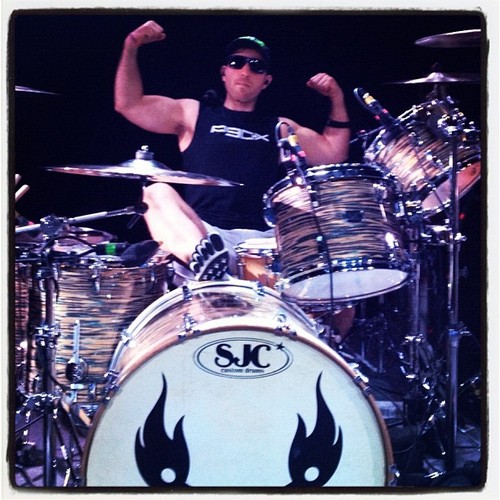 by Charissa Lock with Coby Linder of Say Anything

From holding Koalas, starting (and remaining) in a band since he was 14, being the healthiest rocker on tour, as well as a badass drummer; Say Anything’s Coby Linder certainly has a lot to be happy about.  Killing the cabinet caught up with Coby post-show in Providence, Rhode Island (*).

Say Anything has recently made their way into Australia, how was that experience?

CL: Amazing.  It was such a great place and (the) people are awesome.  You always do a show and then have one or two days off so there’s plenty of time to travel and sight see.  I held a koala, saw dingoes, walruses, and wombats.  It’s definitely one of my favorite places (to tour).

Personally this is my third time seeing you at this venue, with five or more times in Boston, you have definitely had your share of touring cross country, how have you made sure your tours are differentiated to fans, like myself, who go every time you’re in their city?

CL: You have to change the set list for sure.  Trying to appease (the fans) in terms of playing singles, ones that we know they want to hear (“Wow, I Can Get Sexual Too” “Shiksa” “Do Better”) and then throwing in those random songs – deep cuts (“People Like You” “Stephen Hawking”) so that you’re giving them something to mix it up.   Sometimes Max will do acoustic.  (We) also want something to keep us interested too, we do play these songs every night.  For me, I always want to keep challenging myself and keep positive attitude to making it better.  Always improving, not just for fans but within ourselves as a band.

Touring stereotypically means fast food and lots of drinking of higher calorie items (i.e. beer).  Knowing your trying to continue your health-conscious lifestyle, how are you able to do so in an unwelcoming lifestyle?

CL: It is a challenge, but such a welcoming challenge in my life.  If you want to make it work for you here, you have to have some way to make it work at home. You really just have to give a shit, you have to care.  When you’re on tour especially you can’t control a lot of things, there’s so many things that can deter you away from your goal.  For instance, sitting around doing nothing (sitting on your bunk, watching TV on bus), which is not necessarily bad, but things that deter you from your goals.  You can either sit around not doing anything or choose to work out for half an hour.  Food, you have to plan and understand that you might stand out, it might be hard, but if you have a strong why and a strong reason it is possible and something I care deeply about.  Nobody wants to treat their body bad, people are ignorant in the most innocent way. I try to lead by example and show that (healthy touring) can be done, if you have the courage to do it.

With so many great percussion moments on many of the songs that are played live, which is your favorite to perform?

CL: Last tour we did “Slumming It with Johnny” it has a cool drum solo.  Songs that are all over the place are really fun, on this tour “The Stephen Hawking” and “Mara and Me.”  Then “Baby Girl I’m A Blur” and “Wow, I Can Get Sexual Too,” are chill because I can lay back and get into the groove playing to a click-track and let the crowd take me there.  I can find enjoyment in all of them.  My favorite to play is a tie between “The Stephen Hawking” and “People Like You Are Why People Like Me Exist” are the two that get people pumped up.  It’s a B-market tour, playing B-songs.

Besides being the drummer from a rock band, you have also started your own fitness and wellness lifestyle, “Lean With Linder.”  Can you tell me about how this started?

CL: I was always looking for it but didn’t know where it was, how to do it the right way and live that lifestyle.  In February 2009, I came back from Warped Tour, unhappy, and I found health and fitness.  I did BeachBody and P90X and it just changed my life ever since.  It’s not something that happens overnight.  There have been so many ups and downs, but I’m so happy to be where I am right now.  I’m thankful for it, and I’d like to help other people realize they have it in them – be healthy, be fit, and not be the victim to what society is doing to us.  Freedom of choice is being taken advantage of because we’re greedy.  I can lead by example and if I wasn’t, no one would follow along.

Say Anything band members tend to have side-projects, whether musical (Jeffrey and Jacob’s XO) or your “Lean With Linder.”  How are you able to balance both projects, holding them equally important?

CL: Great thing is I can do it anywhere, coaching is living your life.  You doing it and people seeing it and asking what you’re doing.  They then want to do it and you show them how.  With Say Anything we don’t tour a lot, a lot.  We’ll tour, take some time off, etc.  Personally, it’s my lifestyle and making the band fit into that because I’m not giving up either.  I need to make the band not be a negative thing, bringing me down on my health, it has to be a good thing.  My bandmates have been very understanding; me taking over the fridge, taking over draws and working out.  They’re curious too.  Just because I’m in a band doesn’t mean you don’t have to follow it.  I’ve been in Say Anything since I’ve been like 14 and (this healthy lifestyle) has brought me down to earth.  Every human needs it, then everything is better  – the drums, the music.  It’s so universal, everyone can benefit from it.

Though you started on In Defense of the Genre, the first time there weren’t other guest vocalist was with Say Anything’s self-titled album where you were having more vocal opportunities (“Mara and Me,” “She Won’t Follow You”).  Furthermore, as you hit play on your latest album (Anarchy, My Dear), your voice is the one first heard on “Burn A Miracle.”  What made you decide to add more vocals?

CL: We knew it was going to happen.  I started feeling more comfortable with vocals, and (Max and I) somehow knew I would be starting off the album.  We had “Burn A Miracle” written, and we wanted a cool intro and decided for me to start it off.

Anarchy, My Dear has a very distinct theme, anarchy from the pop culture and force-fed advertising, what is your take on this type of anarchy?

CL: I can’t speak for Max on how he wrote it, but (for me) it’s just to question everything.  Even questioning yourself, what you really need and what your motives are.  Things can get so misconstrued; we need to think of what we primarily need.  It’s good to be strong enough to understand and live like that.  If people are taking responsibility for themselves and stop blaming the government, stop blaming their parents, and start thinking “this is where I am in this moment” and “how do I move forward?”  Sometimes it takes taking the smallest thing in your life and changing it.

The discussion of Say Anything’s “first” album Baseball being re-released is an exciting moment to old school fans, as well as those who have heard such fantastic things about it.   Your instrumentation and composition was involved in making it the first time, how do you feel about this release?

CL: It’s so great and is the perfect time to do it with our fourth record out there.  People have wanted it for some time now.  We felt that people can either keep downloading it or people can buy it.  I think people are going to be really stoked, the songs are great.  I look back at the fact I was 16 and think – these songs are good.   Even my drumming, you can hear the influence of David Grohl and Travis Barker.  It’s a cool piece for me and Max, a moment of time for us to look back to that moment of time, pictures and songs.  I remember meeting Max at camp and being like “I want to play in a band” and look what it’s come to.  Every night Max says that we’ve been in a band for 13 years.   I’m 27, it’s been a majority of my life.  I think the fans are really going to appreciate it.