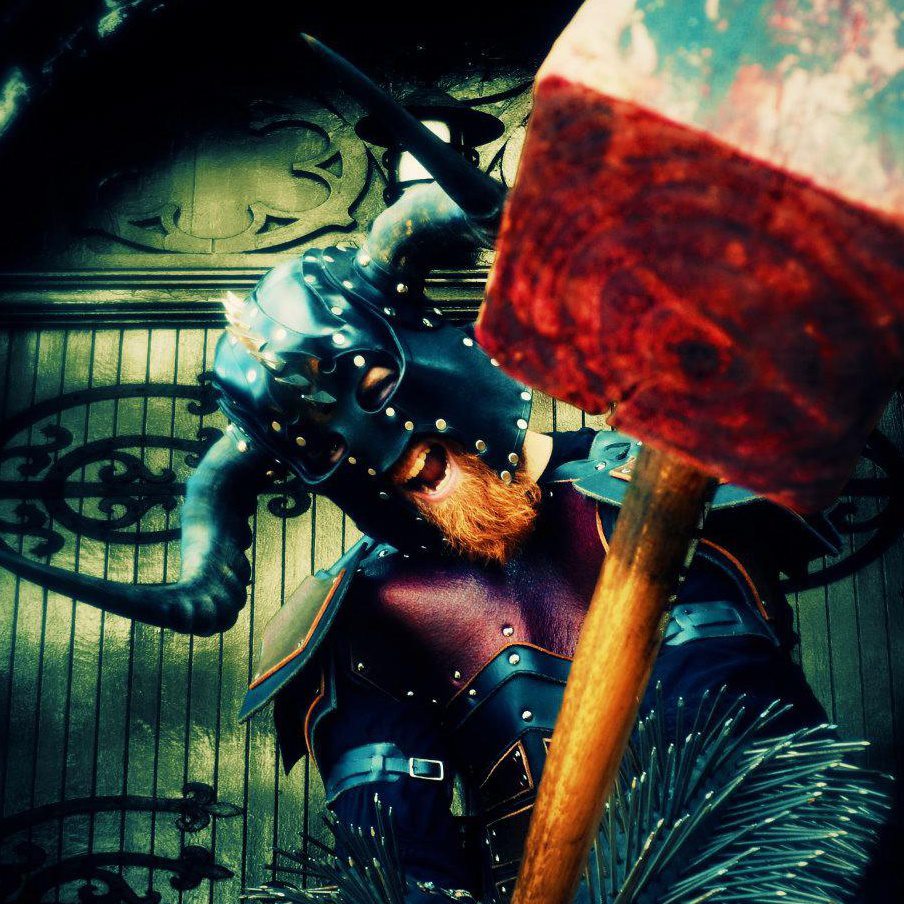 Killing the Cabinet Interview with “Sinister Hell” of Suffer The Wrath

Your costumes are incredible; custom made leather armor and helmets with real animal horns covering your entire body!  Wow.  Your attire really enhances the element of darkness that Suffer the Wrath incarnates.  What do you feel that your costumes add to the show?

SH:  Well to start we dont think of our attire as costumes. To us, the armor we wear is what would have actually been worn in mid-evil battle times.

How vital are they to Suffer the Wrath as a whole?

SH:  As they say there is no heavin with out a hell!?!  The same goes with they way we look. Suffer will never have a show with out our battle armor or helms.

Death metal can often be perceived as angry and violent, especially for those who aren’t regular listeners, because of the ways in which the lyrics are projected along with the intensity of the music.  It’s interesting to think that some of your songs might be about love, or about a beautiful life experience.  What inspires the lyrics to some of your songs?

SH:  Well there is no love in this tale. Our music is about suffering, death and pain of being dominated in a world of everything that is unhuman.

Your ep Buried in Blood is up for free download on ReverbNation and your full length album Opposition Dethroned is planned to be released in January.  Where does the title come from?  Is there a running theme or story line throughout the album?

SH:   The album Oppositin Dethroned will take you through a journey of Lord Paynes life. The title was the best way to sum it all up.

How do you guys listen to music?  Spotify?  Pandora?  What outlet do you utilize the most when searching for new music?

SH:  That would depend on which one of us you talk to but I can say the most of us are on youtube alot.

What are some bands that you listen to outside of heavy metal that might surprise us?

I imagine a STW show to be pretty rowdy.  What pumps you up on stage when looking out at your crowd?  What is the one song that you notice really takes over the fans?

SH:  We are mostly into our instruments when playing so the crowd actions don’t really matter to us but after our song “Slave King” we get a lot of yelling after.

You recently played a show with Deicide, a metal band that formed the late 80’s.   What was the experience like sharing the stage with musicians that have been playing together for so long?  Did you see something in them that was inspiring for the future of your band?

SH:  Opening for Deicide is one of the highlights of our career so far along with opening for Cattle Decapitation. As with seeing something from the show, would be that Glen Benton told us “Now thats what im fucking talking about” as Lord Payne and I “Sinister Hell” walked off the stage after our set. it was definitely nice to see he liked what we do.

What Christmas song would we most likely get to experience Suffer the Wrath performing and how would you alter the composition of that song?

SH:  You will never see Suffer taking part in anything that is connected to christmas. We did however do a show with Allegaeon that had a xmas tree on the side of the stage that was at a burlesque bar, definitely was a weird night.