Interview: The Naked and Famous 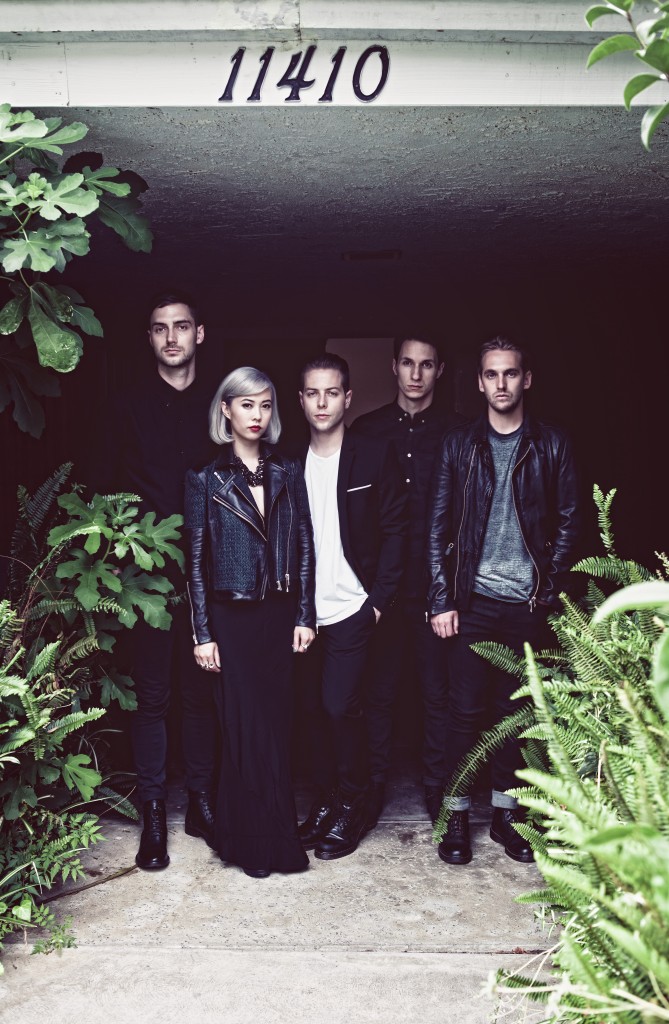 Interview by Matt, Charissa and Aurora with Alisa Xayalith (AX) and Thom Powers (TP) of The Naked and Famous.

Without any doubt, ktc loves The Naked and Famous.  They came storming out a few years back with the killer dance hall crasher “Young Blood” which is probably how you were introduced to them.  They toured extensively, extremely professionally I might add, to all corners of the globe.  Since this mini explosion they moved to Los Angeles and wrote a fantastic second record on par with some of our favorite albums of 2013. We had a few minutes with the voices of @TNAF Alisa and Thom, talking about about PTSD, their current single “I Kill Giants” (watch the awesome video here) and video games.

After a long world tour for your debut album you didn’t take much time off before getting back on the scene in the U.S.; about a year. The album feels like the perfect 2nd chapter to Passive Me, Aggressive You. (which is why I mention how quickly you turned this album around) Was there any Post-Traumatic- Stress-issues (PTSD) after returning from such a long tour? Do you feel you had enough time to regather yourselves as human beings?

AX: Thanks! We definitely could have kept touring PMAY. Touring is all about execution and we didn’t want to spend another year not having any major creative output. There was certainly an amount of adjusting to do when we came off tour. Mainly trying to acclimatize to life in the USA. Thom had been working on material while we were touring and as a band we’d had a few great studio sessions/demos. We had strong footing to begin the process for ‘In Rolling Waves‘, although it took me a long time to get working. Hearts Like Ours (watch video here) is somewhat about overcoming this anxiety.

Worldwide, we all share commonalities in music theory, composition and structure, yet each region tends to have it’s own unique style and characteristics that hold true to that particular area. How does pop music coming from New Zealand differ from what you hear coming from American pop artists?

TP: You’re right, we do all share the same hand full of notes! That’s why music crosses language barriers. But I don’t feel comfortable summing up something so broad and constantly changing… I think what we share more obviously are production elements. At the same time my immediate surroundings don’t have a direct influence on my musical identity. I feel like that the idea implies a limited imagination… Passive Me, Aggressive You certainly doesn’t sound like my Mum’s house in Browns Bay, Auckland. I had moved back home to finish the record. Having my parents support was vital. I couldn’t have finished the record without it.

“Grow Old” is a standout track on the record melodically and lyrically. A lullaby for the modern age. Was this an ode to “growing old” or “losing time”? Or just how we grow apart from others in our lives? What’s the back story on this song?

TP: Thanks again! It was one of the first “complete” demos for In Rolling Waves. It felt like a huge achievement for me and really set the overall tone for the record. There are such polarized elements in Grow Old, it always felt like a “centre’. Hence it’s sequencing and why we felt it was appropriate to use one of it’s lyrics to name the album. It’s about complicated consequences: the aftermath of having challenged traditional ideas of a “relationship” or monogamy. Like most of our songs, there’s denouement. It’s more of an emotional narrative.

Losing a loved one is the most difficult and tragic life experience that anyone can go through. With that, there is also the potential for the tragedy to put you in a creative headspace, allowing beautiful art to materialize. Alisa, you have discussed how difficult, but therapeutic writing about your mother’s passing has been for you, and we can feel that intensity in “I Kill Giants” This bone-chilling track stuck out in all of its epic flamboyance even before hearing the connection with the popular indie comic book series of the same name. How much of this series finds itself embedded in the song?

AX: Losing my mother was the biggest event of my childhood. After starting TNAF I sort of figured I was always going to write about one day. Thom felt very strongly about the lyrics so that helped: singing about something so personal made me nervous. It sounds cliches but being creative this way is a kind of mental release. Finishing a song this personal gave me a sense of “coming to terms”. Thom had this idea to name the song after the comic book, “I Kill Giants“. Being on the outside, he saw parallels with my story. It’s a cool comic!

Justin Meldal-Johnsen seems to be a name that is popping up everywhere lately. Was Justin the icing on the cake? Did he help you close the door on this album or was he more of an inspiration during the middle of the recording process? Tell us about this experience.

AX: Justin came in at a time where Thom had a creative block production-wise with ‘I Kill Giants’ and ‘The Mess’. His involvement was very discussion based. He listened, commented, suggested and encouraged. He felt his way into the group and really just helped Thom make sense of the situation. He’s a rational, hardworking and sane person. Good sense of humor too. And he’s a nerd. I think he gave Thom a confidence boost, as a producer. I feel like they both learnt a lot from one another.

Your songs have a lot more organic feel to them this record. I’ve read that you are aiming to rid of a lot of backing tracks on this run. This is quite ambitious given the wall of sounds from PMAY.

TP: When you consider the fact that an electric guitar, a feat of engineering really, I’m not sure “organic” is such a great word to use when speaking about music… ignorant kids like to fling it around to describe sounds they like without having any knowledge about how songs have been constructed. Often when people are trying to describe a band as “organic”, they’re actually referring to the image surrounding the band. Even Arcade Fire have a press officer lol. I don’t know why people find the idea of trying to be thoughtful so uncool… it’s like the more reckless and unconsidered you seem, the more “legit” your art must be. There’s another term for not thinking: being dumb. All that said, we do experiment. All the time. But then we take those experiments and organize them.

We’ve been lucky to see and hear your rise from the Echoplex in Los Angeles to your Fonda appearance, and also one other show in St. Petersburg, Florida. The one thing we’d say about your band is that you’re straight-up-professionals. Some bands break the monotony with humor (Blink 182) and some take themselves a bit too serious (Morrissey). Do you think you’ve found a good balance of fun and professionalism in your live performance? What can you share about what makes TNAF different from other bands performance-wise?

TP: The other day some reviewer criticized us for being too well rehearsed lol. For TNAF, live performance is about promoting our body of work. The Naked And Famous exists by way of it’s studio recordings. In that respect we’re serious and performing live is about bringing our creations to life for our fans: not to entertain ourselves. In fact live shows are always “fans first”. I get to make albums for a living! I don’t need any more self indulgence lol. Touring is about respecting and thanking the people who’ve invested emotionally in our music. On the other hand we’re also entertainers. And it’s a rock show! Our live show would be a lot more technical and intense visually if we were a larger band but I think we have an exceptional show considering the venues we usually play. Our lighting is quite dramatic and inventive, we’ve been working with a young chap named Liam Griffiths since our first tour. I think our performances are articulate, sometimes epic, along with a few moments of “human”, where you get to see the who behind the what. 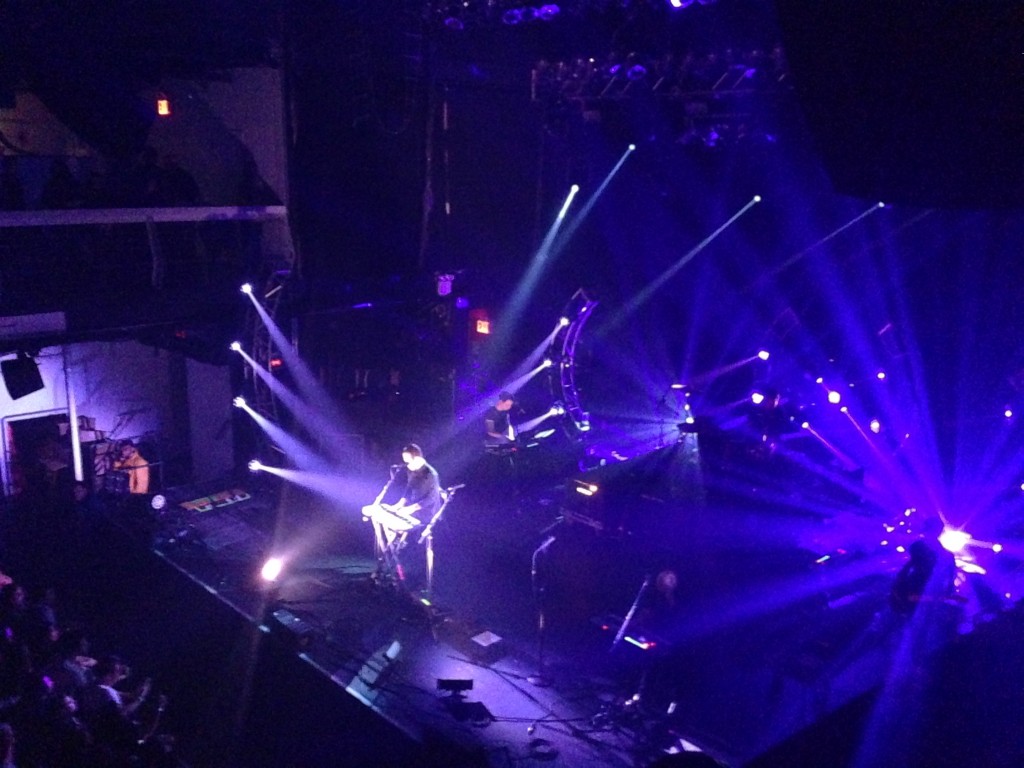 Being a gamer, will you have time with your record release cycle and rehearsals to get in time to play and finish Grand Theft Auto V? If this game isn’t your thing, what game have you played recently that was part of your “escape”?

TP: Ha! David bought it for this tour. He kept passing me the controller whenever there were shooting missions though. I think Aaron finished the story aspect on the last day of our US leg of the tour. I’m holding out for Christmas time, where I’m going to take a week off to play the new Batman game. I think it’s great how games have become an interesting new platform for releasing a single, or being part of a soundtrack. I haven’t played it yet but I bought Max Payne 3 because of Health’s “Tears“. My buddy Kam‘s band The Chain Gang Of 1974 has had some great exposure being part of the GTA5 campaign. And we reach so many people being included in Fifa 14.

What U.S city are you most excited to return to on this tour?

AX: I love touring the USA as a whole. There’s no other touring experience quite like it. It’s romantic and rings true to the idea of being “on the road”. There’s more pattern and repetition but this has it’s values. Generally it’s hard to be specific about favourite places. The hours we spend in each city or town are fleeting. There’s usually some free time before soundcheck but often by the time we get off stage all we’ve seen is the dressing room… maybe the bar lol. The most real impressions we have of the cities and towns we’ve visited are from the audiences we’ve performed for.

We work with a lot of baby bands (emerging artists) and ask every band, small and big, what’s a piece of music industry advice they’d like to share that helped their career path (yours in this case)?

TP: I have always been a critical person. I feel inferior and infinitely flawed. I don’t think this is a negative thing. Understanding the reality that I am, and will always be, quite stupid is what compels me to try harder, to do more, to experience, to learn, to achieve, to self-motivate. I think if you attempt to be considerate, you will inevitably find yourself in-motion.

Check out TNAF on tour in Europe right now, and make sure to get your tickets for their early 2014 support run with Imagine Dragons as they’re selling out fast.  Stay in touch with them on twitter and facebook and don’t miss out on their fantastic album In Rolling Waves (read our review), that you can purchase on iTunes or Amazon.

TAGS: The Clothed and Poor, New Zealand, Football or Soccer?, “I’ve been lonely when I’m with you.
But now I’m lonely all the same.”, Amazing people: Aaron Short, Alisa Xayalith, Jesse Wood, TNAF