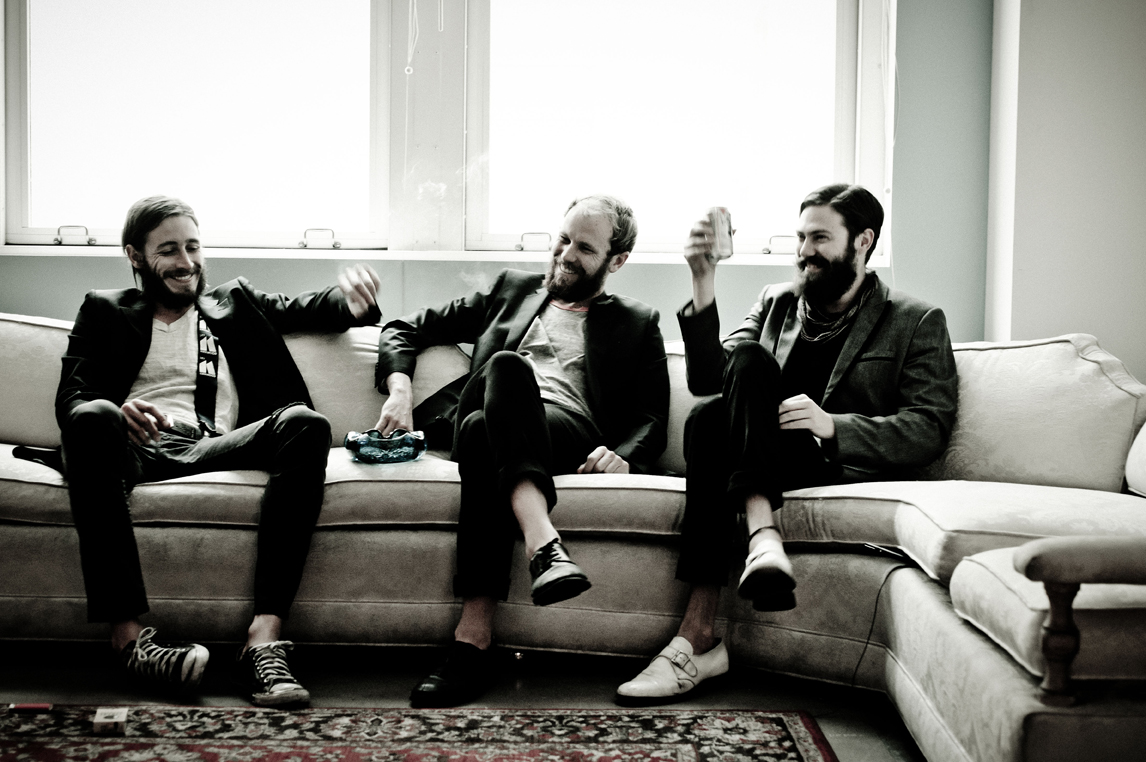 This interview is with Jesse Taylor of Wildcat! Wildcat!

Interview was done by Matt & Charissa

Your style is advertised as being “sexy,” and frankly listening to your songs it is a pretty good description. Was it the plan all along to make music with this type of atmosphere?  What inﬂuences do you have?

W!W!: It wasn’t intentional on our part to be making “sexy” music (insert haha), but somewhere in our 3 different styles and approach to music we ended up coming up with a sound that we really like and are proud of. There are just so many influences which some are probably apparent and some hopefully more hidden in there.

You have been creating music with each other for the past 15 years (Wildcat! Wildcat! being your newest project), what growth have you made in order to get where you are now?

W!W!: We’ve all been such close friends since early high school and have played in bands here and there with different people, but this is the first project where it’s only been the 3 of us writing together. You learn something new at every stage of your career, whether that’s being a 13 year old picking up a guitar for the first time or playing in front of 10,000 people. Every step is valuable and always improvable. We’re very excited to be venturing deeper into what we’ve started as W!W!

Speaking of “Mr.  Quiche,” would you mind sharing the meaning behind this home-cooked title?  Can you elaborate on the treatment?

W!W!: Like most of our songs, Mr. Quiche just started out as a short idea that we put through our “process” of sorts. We usually always write and record our songs before actually playing them live or practicing them. It’s a different writing style than we’re used to but has been a fun challenge to write parts that wouldn’t necessarily make sense if you were to write them in a live setting. We’ll pass vocal and instrumental ideas back and forth with eachother until we get something we like. Mr. Quiche is not about food though we do love ourselves a tasty egg pie every once in a while!

Your music is classiﬁed as indie r&b.  With this not being the typical indie genre, do you think this is going to be a genre that we will be hearing more from in the future?

W!W!: Who really knows where indie r&b will be or become. I think it’s great that people can find an association for our music, though we didn’t intend to necessarily fall into any genre at the start. A good melody and a good beat is just where we’ve liked to start so far…but there’s alot more in the W!W! tank that hasn’t been touched yet. All in all, if people can come to a show and simply feel something, whether it be dancing or emotion, then we are happy with whatever genre we get classified as.

Besides creating and performing jam-worthy music, what other hobbies do you have?

W!W!: Fishing, Kan Jam, Trivia, Surfing, Pool, and pretty much any sport that resides itself at a dive bar! (other than actually watching sports) we’d rather do things with friends than stare at a tv.

What are Wildcat! Wildcat!’s thoughts on streaming services?  Love/hate?

W!W!: Love. With most things in the music world being free these days, it’s a good challenge to create things that are unique ie: a live show, artwork, or something that a person is willing to pay for. I’m sure lots of bands get great exposure from streaming and that’s great.

August residency at the Echo started this past week.  How did that come about?  How was the ﬁrst one?

W!W!: We were offered to play the residency a few months after we played our first show in Feb. It has really been such a rapid build for us from the start, and we are so grateful for how the residency turned out. Each week, people kept coming and packing the place out and actually singing along and dancing! It was so beyond anything we expected in such an incredible way. The people who’ve been coming to see us are so generous with their energy that it enables us to really get into it with them. Afterall, we’re all in that same room together for 45 min…we might as well enjoy it!

One band/artist/album to hawk that came out in the last 12 months.  Ready set go!

W!W!: Though they don’t need extra “hawking”, we all really do love Alt-J and are very excited to play with them again Sept 29th at bootleg. Great guys with amazing songs. We got to play in SF with them last month and what an incredible time that was!