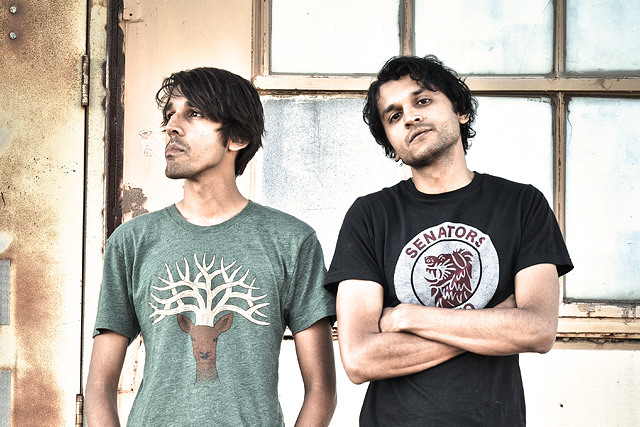 Music is the true religion of the world (to us anyways).  Its unbiased in how it makes you feel.  Enter, Wildlife Control, a band surviving in San Francisco and Brooklyn pursuing rock n‘ roll dreams.  Their music emits the never ending glow of fun summer nights.  We’ve been stuck with bands like this lately and it doesn’t hurt.  Summer’s in Los Angeles can reach as far as November, please don’t tell anyone that, and music from bands like Wildlife Control aid to our extended summer.

Interview is by Matt Downes and Chris High with Neil (N) and Sumul Shah (S) of Wildlife Control.

Tell us about your beginnings.  Was it one song, was it years of saying “lets do this” or other?

S: We’re brothers, and we’ve always been close, so in some sense thebeginnings go all the way back to when we were little kids. We’ve alwayshad a lot of fun collaborating on stuff, both musically and otherwise. Afew years ago I started playing the drums. It’s an instrument I alwayswanted to really dig into, and it has sort of consumed me (in a good way).Eventually, I sent Neil some crappy recordings of me playing, and shortly thereafter we decided to collaborate long distance on some new tracks.

Your music has an indelible 80‘s pop-sense to it.  Did you write songsintended for pop radio? Who’s your favorite 80’s band/artist inﬂuence?

N: We grew up in the 80s, and our Mom played the radio every morning while we had breakfast. It was a very consistent daily ritual, and that music left an indelible mark on us. It’s hard to single out one band from the 80s, because hits back then were massive. There was a lot of Van Halen, Journey, Styx, and dozens of one hit wonders that conjure up memories of toast with peanut butter and a glass of milk.

On your self-titled debut you recorded in stairways, bedrooms and parks. Talk about the use of these “natural” settings vs. the artiﬁcial nature of recording in a typical studio.

N: We try to think of the recording medium as an instrument unto itself. As musicians first and foremost, we look for ways to make the act of recording feel more like “playing an instrument.” Looking for unique places t0 record, and thinking about the sonic relationship of spaces set against one another brings an aspect to the process that we really enjoy. We like to believe that something mechanical can feel organic if approached with a spirit of exploration.

Flashs of brilliance outside of your single come from another pop-charmer “People Change” and the epic piano from “Darkness”.  As brothers, do you share genres or more overlap?

N: Thank you for the kind words. Sumul and I share a lot of music in common, but also have some differences. When it comes to the Wildlife Control aesthetic, we have a very shared vision. We keep each other in check, and make sure we’re creating something that fits our sound.

As embracers of technology through your songs and videos are you keen to the transitioning music industry?  Are you fans of streaming?

S: We’re really lucky that things have been changing so quickly. A few years ago, we wouldn’t have been able to make our music the way we do (on opposite ends of a continent). We wouldn’t have been able to release it to an audience all over the world the way we did. We try not to take that for granted when we’re finding ourselves frustrated with little hurdles along the way. It’s an amazing time to be an artist. And yes, we’re fans of streaming. But we’re also fans of vinyl.

S: Neil got me this vintage Ludwig Acrolite snare drum for my birthday. I wasn’t sure what he had in mind when it arrived, because it was a little beat up and some parts were missing. We fixed it up and it turns out the thing sounds amazing. It’s become my main snare drum. Tons of character. Plus I don’t have to worry about adding any more scratches to it.

I recently saw a documentary about Paul Simon and Graceland. That album is on a million or so “best albums ever” type lists, but seeing exactly how much effort and perseverance went into it made me appreciate it on a whole new level. Definitely inspiring.

Recently you celebrated your anniversary of your ﬁrst show.  What are your goals moving forward?  Do you have goals of getting a record deal, agent and touring the world?

S: Our goal is always to make the best art we know how and make sure that anyone who wants to hear it and see it has an opportunity to do so. Those things you mentioned could certainly be very helpful, but they’re means to an end; they’re not the real goal. Of course, we’re open to working with anyone if the relationship is a good fit, but we’re not too worried about doing things a certain way.

We work with a lot of emerging artists and baby bands at ktc.  What’s one thing you’d tell a young musician who’s just starting out?  (with hind-sight being 20/20)

N: I don’t think we’ve done anything to warrant giving advice per se… but I suppose over the last few years we’ve learned that there are many different aspects to being a working musician or band. There’s the business stuff, logistics, etc… We’ve learned to stay focused on the creative side of making music and art, and let the chips fall where they may when it comes to the rest. To boil it down: life goes by incredibly fast, stay focused on exactly what you want to do with it.

Wildlife Control is at CMJ this week in New York City.  They’re playing on October 18th at the Delancey.  More information here.