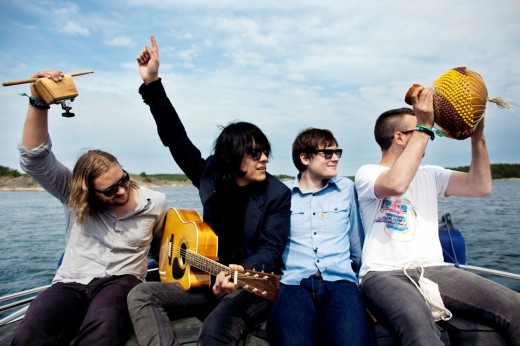 Interview by Charissa Lock with Rune and Matius from Young Dreams

With a plethora of internet accessibility for obtaining new music and finding new artists, how do you consume music?

RUNE: The Internet is cool. Streaming services are super for discovering stuff or for situations where you can’t bring your records. But I always go back to one or the other plastic flavor. Support your local store!

You’ve recently just played at SXSW in Austin, Texas.  What was your favorite part about this experience?  Your least favorite part probably has a lot to do with losing your gear due to an airline debacle.   Did you borrow or cancel?  Anyone special to thank for making it happen?

RUNE: The beer and the food and the swimming pool. But yeah, the concerts were a lot of fun, both with and without gear. Mitzi and Dog Bite saved us, as did Fender. It was generally just good vibes!

SXSW is filled with new and upcoming artists from around the country, and world.  Which bands impressed you the most? After leaving SXSW, do you have any plans on heading back and touring the U.S.?

After leaving SXSW, do you have any plans on heading back and touring the U.S.?

RUNE: Not yet. But we’re ready.

Being able to perform for both Norwegian and American fans, what have you noticed is the biggest difference between the fanbase?

RUNE: Haven’t noticed any difference. Maybe the Americans were a bit tanner?

Your video for “Fog of War” reminds me of the British “Skins” television show, impulsive teens assuming power to things they don’t understand.  The end leaves the audience wondering what happened to the preppy boy who is shown on the ground bleeding from the head.  We assume it was Simon who did it, but the narrator was also emotionally involved with Simon, which sometimes brings forth anger.  Could you give us any insight?

RUNE:  Not really I’m afraid. The plot is all Kristoffer Borglis work, so our guess is as good as yours. Funny you should mention that show though, think one of our songs were featured in it. Got to check it out.

Musically, is it easier for you to create a symphony or a catchy, electro-pop tune (since you have managed to do both quite fluidly)?

MATIAS: I guess both are as difficult/easy. I guess a “symphony” normally takes more time to wright but they are equally demanding on the terms that every part has to have substance and make sense with the other parts of the composition.

With the Beach Boys clearly making an impact in your vocals, which song is your favorite by the 60s surfer-gone-experimental group?

MATIAS: “I Guess I just Wasn’t Made For These Times” and “Surf’s Up“

For whimsically fantastical pieces, such as “Wounded Hearts,” what images appear in your minds as you’re playing these songs?

When did your relationship with record company, Modular begin?  Do you feel things are going the way you planned at this early stage in your career?

RUNE: Our contact with Modular began really early actually. After we played our first show (if three songs count as a show…), the headliners of that night, Australian band the Swiss, told their label about us and so that was the start of it. Wasn’t like we signed with them right away, we saw other options, but they just seemed like the best bunch. And so far it has been a great!