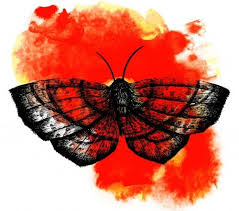 A magical experience would be to attend a White Lighter listening party with all eleven bandmates and just watch as they subconsciously perform an eyes-closed mini air-instrument show with their fingers as their bodies sway to the plethora of beats and melodies.  It would be fascinating and mesmerizing, I’m sure of it.  Conclusively, a live performance would be just as significant, though not as organically stimulating.

Marking Typhoon being the first artist who I have officially written the second review of an album for, I must say this is a big moment for the both of us.  For me, it’s my unbelievable appreciation to be able to share my love for the multitude of talented musicians that I would be hopeless without, and for Typhoon who has completed an album that is just as juicy as their others if not more catchy and fluid (we give one another symbolic high fives).  Their past albums have had all the right components, but some songs had a harder time forming a feeling of completeness to them.  White Lighter carries the fist tearing towards your soul – suck your breath away – modern big band sound amongst all those damn talented musicians with an additional sense of entirety.  Of course there’s not a verse, chorus, verse, chorus, bridge line-up for every track, but many of them feel this way (even if it’s just instruments playing these roles, vocal-free).   Typhoon is a band that wakes you up fast with unimaginable ferocity, and now they have done so in a fluidly concrete way.  There also tends to be more upbeat moments that linger on igniting an extra sensation of flawlessness.

If there’s one thing about Typhoon you need to know early on, it’s that they dig deep into what they have done before to gather inspiration and to bridge across ideas and layer them in between and on top of one another.  Their sound has fragments of all they have created, some moments making more of a prominent connection then others.

Bring the horns back! One of my favorite tracks “Hunger and Thirst” (not to be confused with the title on their 2010 album) is colossal with this Spanish rock horn melody, melding and folding into the rest of the track, the end tails into a lethargic drum roll (teasing you as a faulty build-up) where a reentry of the horn melody would be phenomenally satisfying, but no such luck.  There are reasons for this compositionally, but yikes, how sexy would that be.  I suppose I can imagine it and return to 55 seconds in when the song is just about to conclude, but that seems like some work.  Besides this, the song is delicious, especially with the John Mayer-esque guitar solo followed-up by female vocals floating by and constantly placed transitions along the way.  “Common Sentiments” is my other beloved, wrapped in a continued melody of that of “Hunger and Thirst” trumpets, but traveled by banjos background vocals until the infiltration of horns partakes and my grin has widened and heart’s beat is quickened.  So all in all, they play a mean joke on you by thinking the horn melody has gone forever, when in fact they bring it back in an entirely different form of a song.

The listening party experience I mentioned in my introduction of thoughts about White Lighter only increases as I allow myself a solo listening party.  As the breeze blows through my windows into my now darkened room, I have truly witnessed this album as it should be viewed.  With headphones on and partaking in as many trumpets, violins, distorted guitars as I could, I have relished in the absolute beauty that has trickled through my ears headed for my soul.