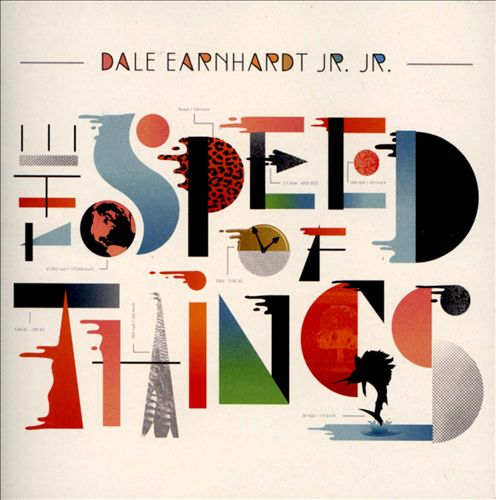 If you are curious as to why us KTC’ers don’t write about a multitude of bands, it’s because when masterpiece’s like Dale Earnhardt Jr. Jr.’s The Speed of Things [Warner Bros/Elektra/Atlantic] (Out Now! Get it Here) slides beneath our fingertips we are taken aback and are unable to register other music until we have had this album on repeat for at least four days in a row.  How are we ever supposed to listen to a so-so album when this brilliance is skating through our souls on our sixth listen?  When we’re in complete captivation with the inability to specify our reasoning besides listing notorious A-lister bands in comparison, or saying baseline facts such as “there’s a great beat here,” we just cannot look at anything else besides.  This album has the unique and supreme ability to catapult itself to the peak of my musical existence.

“Where would I be without you, Miss West?!”  I’ll gingerly proclaim in my exaggerated first grade teacher voice as the 6-year old smirks and hands me my lunch ID’s.  Likewise, it becomes my very thought as the thirteen tracks keep rolling through, over and over.  If I had never listened to The Speed of Things, what would my opinions be like based on similar style music?  Further, based on albums that I consider A-worthy…would they really now that I’ve experienced what it feels like to have been engulfed by something so sublime?  When I listened to GIVERS’ In Light [Glassnote] I believe I shared something along the lines of, “I want to crawl into a cave and listen to the album for five days so that I can drink up every single note on every single instrument.”  DEJJ possesses a different reaction.  Every time I partake in The Speed of Things I want to burst at every seam in jubilation and experience every moment in unison, every single time.  I don’t want to pick anything apart here; I want it all together, drowning me with its perfection.

Vocals.  My god, vocal intonation leading to superb melodies leading to flirtatious transitions.  Personally, that is exactly why I think my breath has been so eagerly taken.   Joshua Epstein and Daniel Zott take great beats, catchy melodies, quirky synth instrumentation, smelling angelically of 60s dance and indie rock, and wrap it in the sweetest male vocals you’ve heard stream from a male in a long time.  They allow every moment to explode by introducing small changes in intonation throughout the song or from one verse to the next shifting key or extending melodies.  Rarely do I feel this blown away by the intricacies of male vocals, so I’m feeling like this is something pretty exceptional.  Likewise, it appears to be the approach of DEJJ, consistently tampering with greatness to implode into the nooks and crannies you never really considered or even knew you would take notice of.   Yet, it’s these two gentlemen from Detroit that have flipped my musical confines upside down.

Me listing my favorite songs is like deciding on the specific reasons of why Miley Cyrus is not my favorite female artist.  There are just too many to choose from:  those that start off with intoxicating beats, or maybe the shoulder-shaking choruses, or softer more slender soulful songs?  Okay, so I do have one that stood out from the first listen, and every time it’s on I can’t stop smiling, dancing, and singing my heart out.  “Run,” plastered onto me like glue, seeping itself in my brain, forever attaching to me.  I simply cannot imagine not listening to it at least once a day, until the end of time.  Yet, then pitter-patter’s “Knock Louder,” with all of its sexiness and those fascinatingly delicious vocals, striking me as another top pick.  And then the rest of The Speed of Things is without imperfection, simply divine.

You cannot go throughout your days without hearing this album.  All I’m suggesting is one listen and you’ll be torn into pieces over how you ever could have survived without Dale Earnhardt Jr. Jr. fluttering your mornings with sweetness and bringing the joy back to your cheeks on your departure into the night.  Everything that you ever wanted or searched for is here, gazing giddily amidst DEJJ’s sophomore LP.