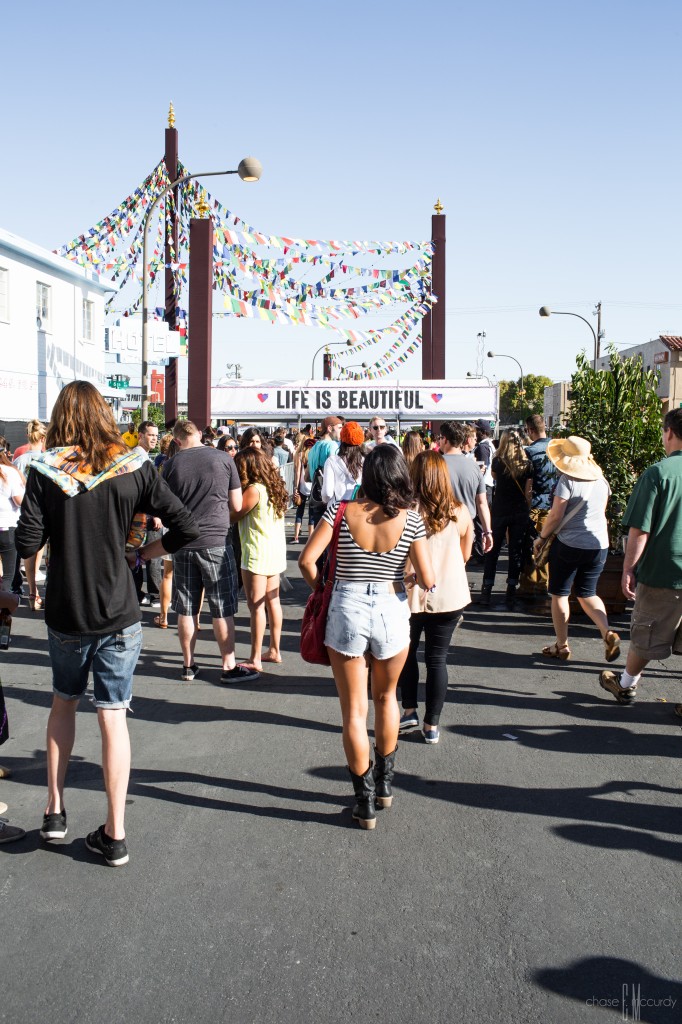 Depending on where you get your information from there was either 20,000 people per day, for a total of 40,000, or 60,000 for the whole weekend.  Either way, the space was big enough for you to enjoy everything the Life is Beautiful festival had to offer.  Combining great food, music, art and unique listening and learning experiences, the downtown Las Vegas event primarily shined. I imagine this will become an event that will have a worldy migration, but for now Las Vegans need to pay attention to Life is Beautiful and treat it as a fixture like Indio does for Coachella.  We make it easy to run through some of our experiences below.  Enjoy! 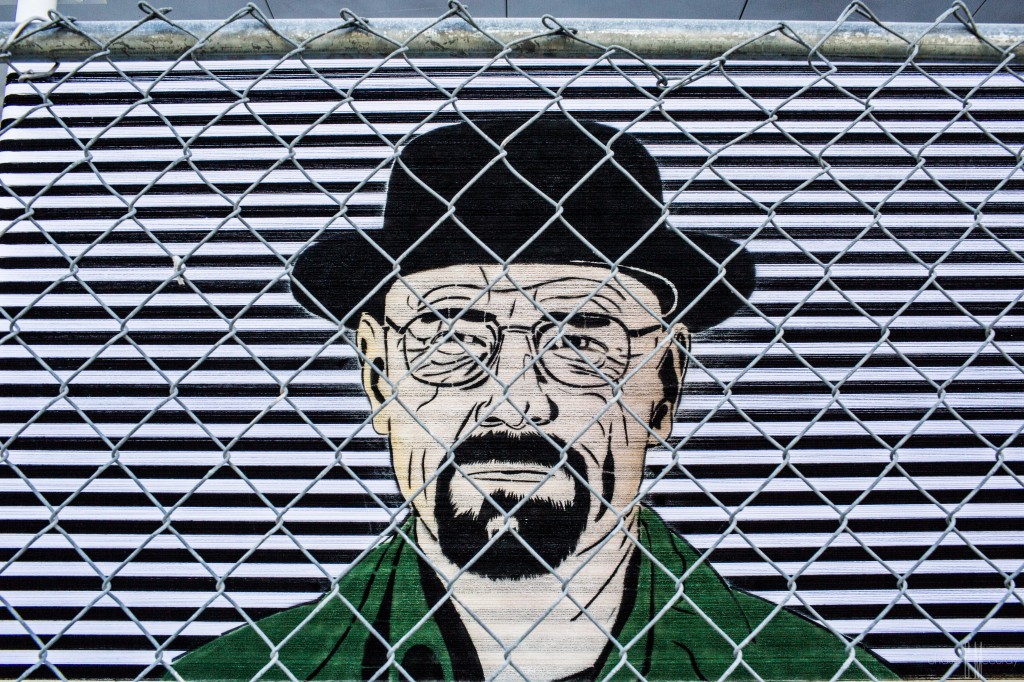 Smith Westerns not giving their all on the Red Bull Sound Select stage.

Even with the “High Five” trash system in place, Friday was a disaster by the Downtown stage.

Not preparing everyone for the potential (or inevitable) winds that could roll in.  See Coachella.

The art work for the color version of the festival poster was atrocious.

Water was either $3 or $4 depending on where you went.  Some places had free mini water towers that were cool, but lets just get water to $2 a bottle please.  This prevents everyone, especially the out of town travelers that are not accustomed to the dry Las Vegas conditions, from dehydration.  Safety first! 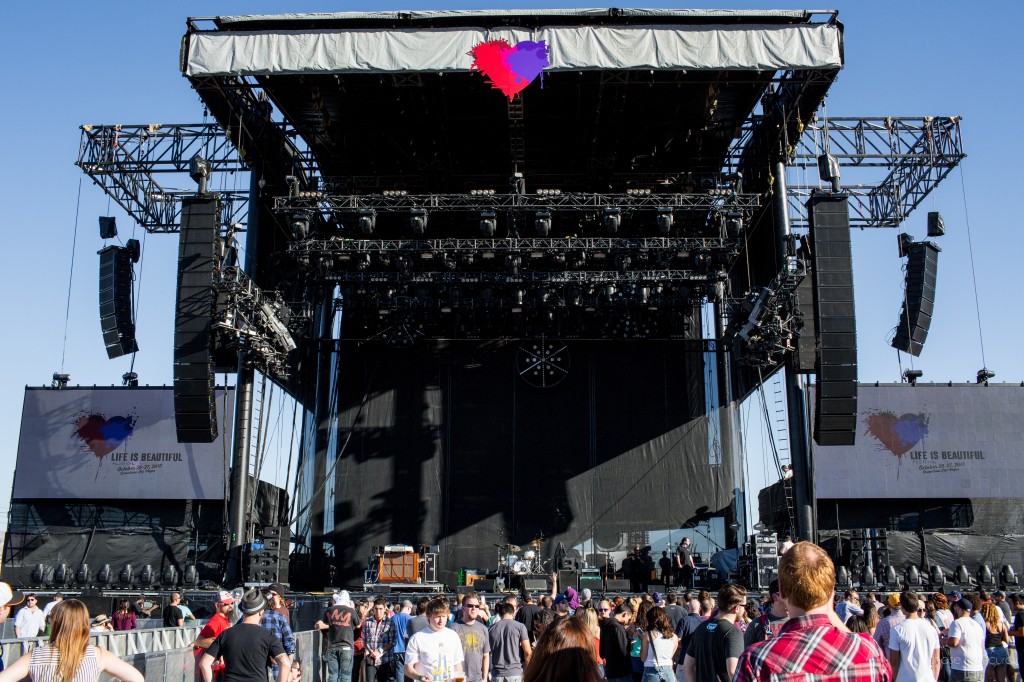 Handing a marker I mistakenly took on Saturday to a group on Sunday so they could sign the big Life is Beautiful banner.

Kings of Leon back in action and absolutely captured the crowd with a 21 song performance that included a 3 song encore.

Empire of the Sun commanded festival-goers and may have stolen some of the thunder from The Killers closing the weekend.

The Killers covering “Pale Blue Eyes” in memory of Lou Reed who had passed away that morning due to complications from liver disease.

An outstanding lineup of food.  The highlights for me were Nacho Daddy nachos and the Culinary Dropout’s pretzels with provolone fondue-like cheese in the village.

The Killers pausing and proclaiming “and we’re brought to you by way of fabulous Las Vegas, Nevada” in the middle of launching fireworks/confetti/fire into the night during the bridge of their song “Battle Born“. Double homage to the great state of Las Vegas. You can watch that performance here.

We have a fantastic set of photos from Chase McCurdy that you can browse right here.  Thanks Chase for all of your hard work.

Tyler from twenty | one | pilots 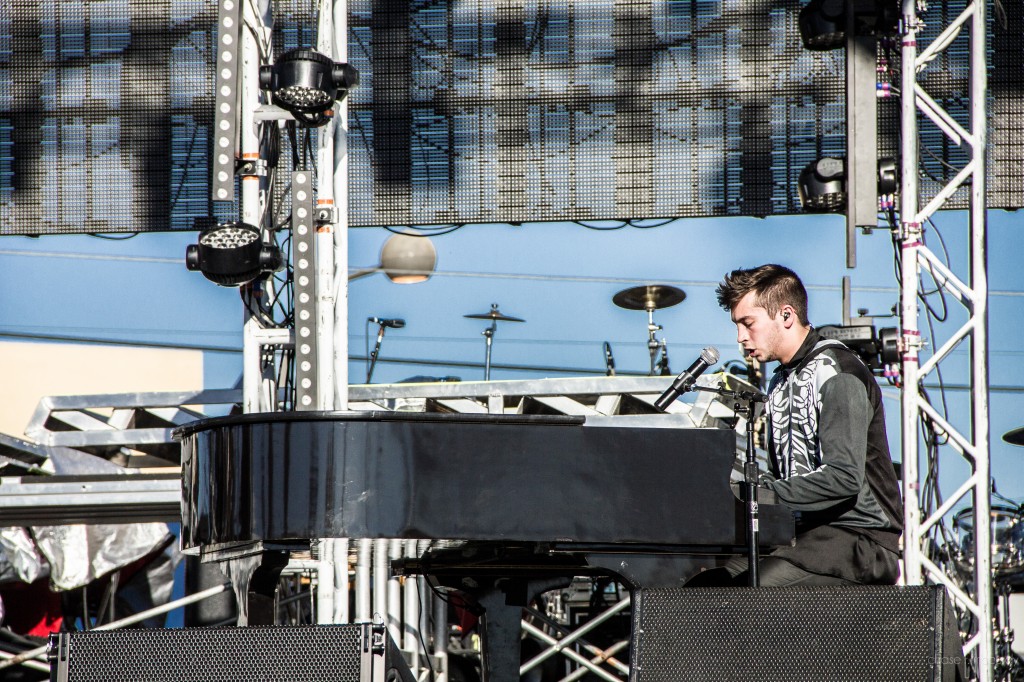 Twenty One Pilots continues to amaze us at every turn.  These songs seem to touch a lot of people from different backgrounds.  I saw a kid basically in tears singing every lyric next to a guy in his 40’s who was smiling and fist pumping through every single song.  It was distracting/yet entertaining to watch as both of them were simply feeling the music with not a care in the world.

Tony Hsieh’s inspirational speech that covered points about his book Delivering Happiness, his awesome company Zappo’s, and the community, culture, customer service and “collisions” around The Downtown Project.  I, personally, left this thinking about the world a bit different.  Its still ringing a few days later. Thanks Tony!

Traveling with a group I mentioned that it might be best to see The Killers close out the festival as I imagined they had some tricks up their sleeves for saying goodbye to Lou Reed and that this was their first show back in their hometown in almost a year.  We were rewarded with an epic set that included all of the above plus the first live performance of their newest tune “Shot at the Night” (produced by ktc favorite M83).

Best bathrooms at any festival I’ve been this year.  Bravo LIB! 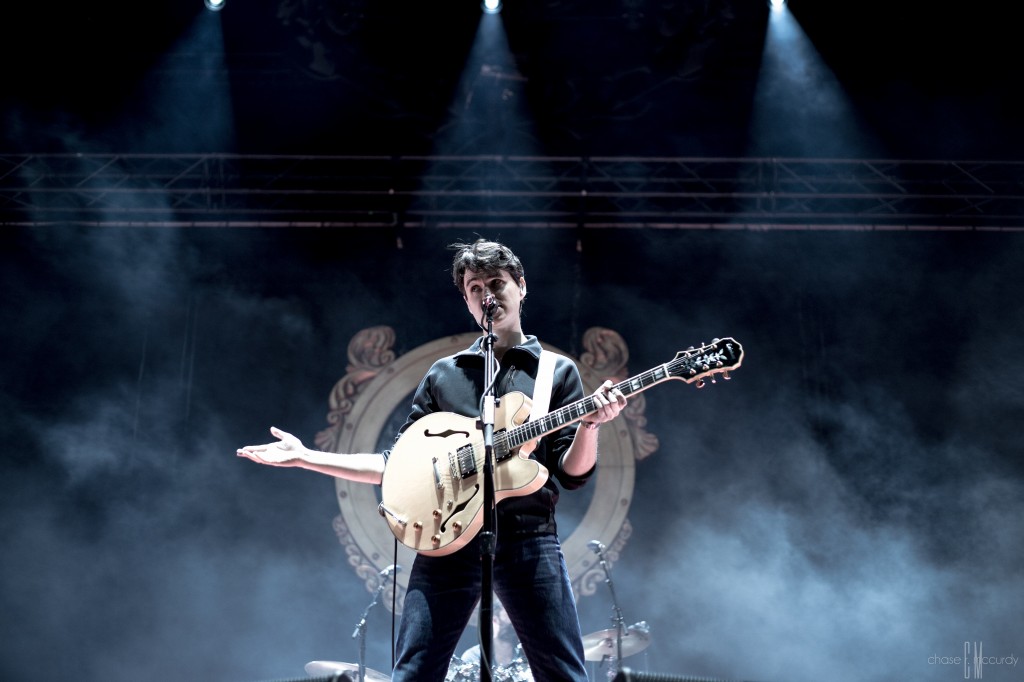 The container park not being open for this event.  I selfishly wanted to walk through it after Tony mentioned it in his speech.

Missing Haim and Vampire Weekend’s sets (or even parts of).  Simply was not enough time.

Not getting the chance to see one chef.  My goal was to catch Scott Conant, but again did not have enough time. 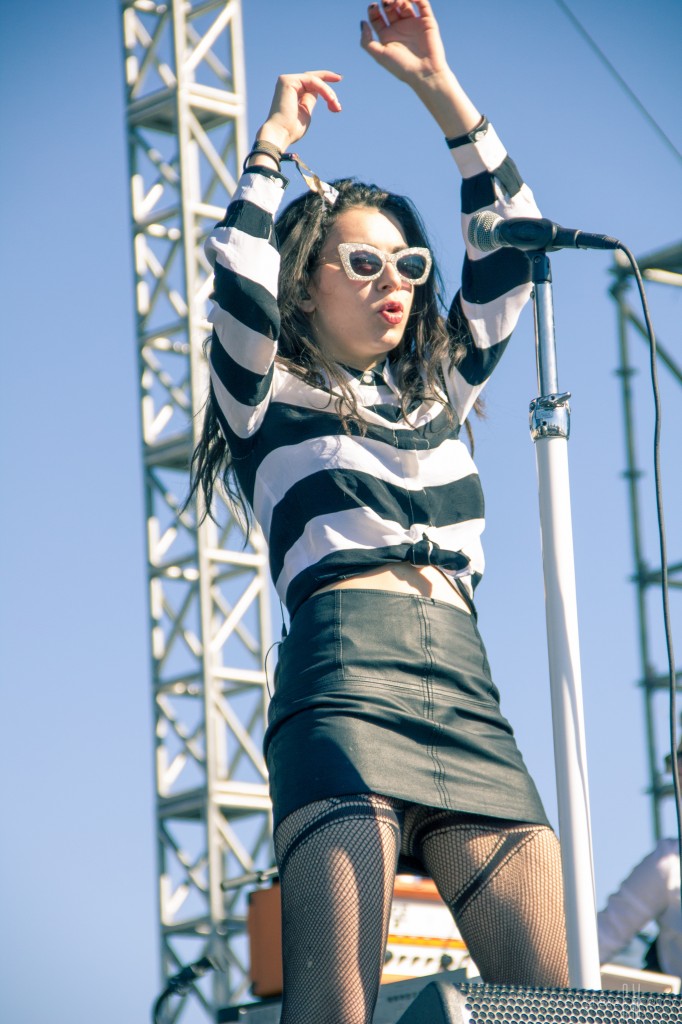 Charli XCX (check out our interview with her) had some tech troubles, and put on an unexpected performance backed by an all female 4-piece band.  Need to see this one more time to give a formal opinion.

In its first year this festival did a great job, but festivals in this writers opinion, need to have disaster scenarios setup for overall customer safety.  What happens if it does get too windy, or if it rains, or if another act of God happens.  Where do we go?  This isn’t a bash on Life is Beautiful, its just an overall observation of festivals in general. 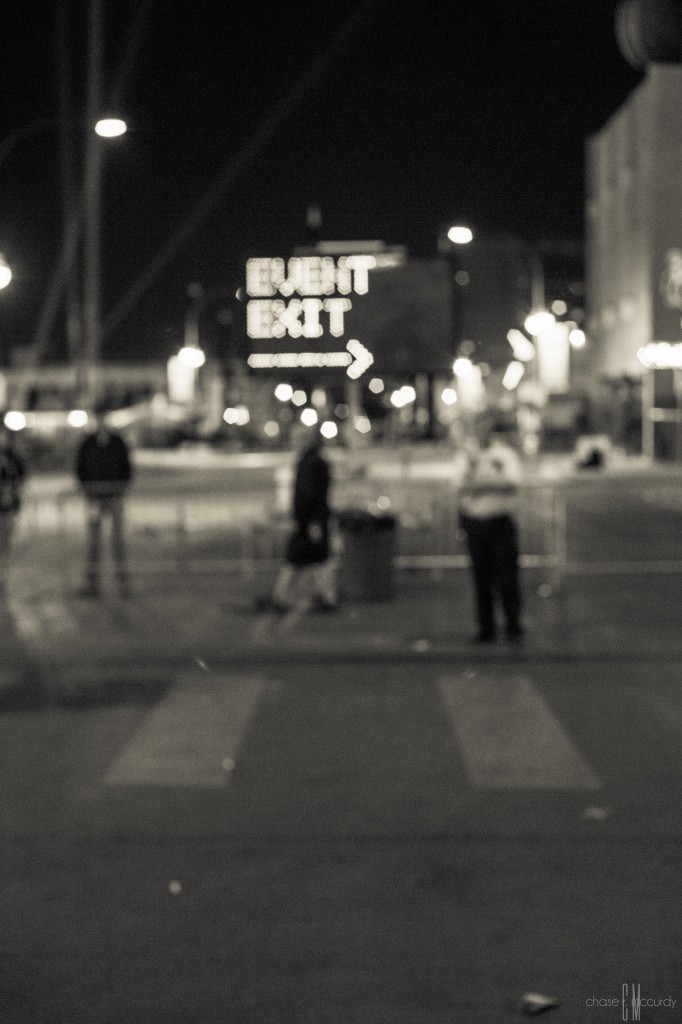 I’m semi upset at not experiencing any of the art section of the festival. We’re a music blog so our purpose is to always focus on the music, but seeing post pictures of the brick paintings, the paint gun murals and the massive walls of art on display makes me think I need to make time next year. Or maybe this festival should move to 4 days?  Two for art, Two for Music. Everyday would be “Learning” opportunities as well as food considering these things are a part of our everyday life anyways.

The Homegrown stage needs/needed better visibility to the road. I didn’t walk inside their once and I walked by it maybe 20x. 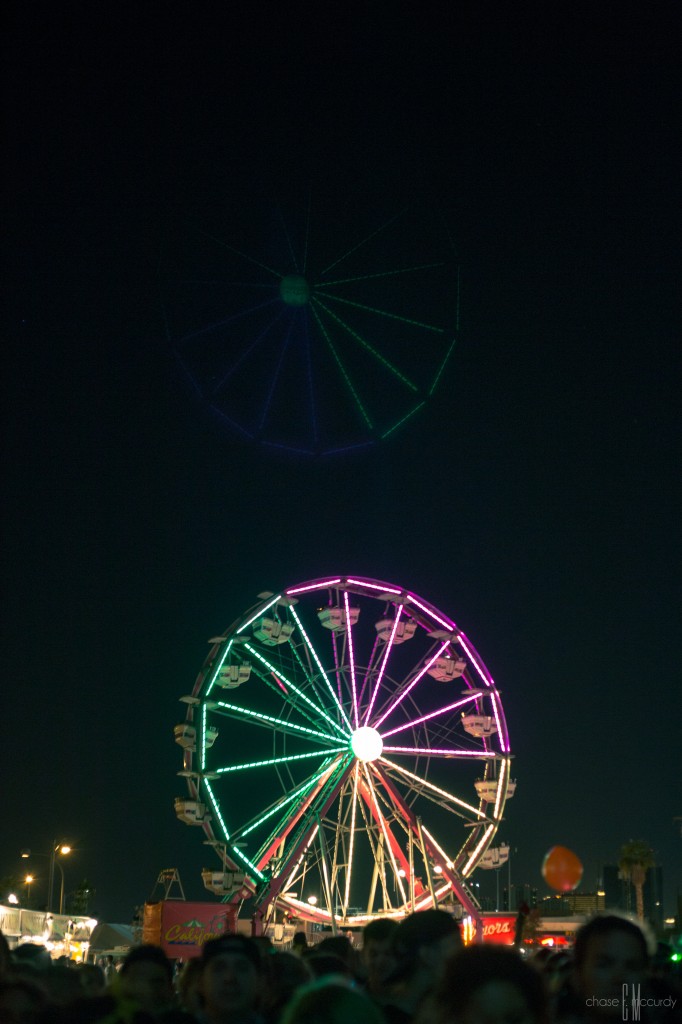 Reading this you’d think I was negatively grading LIB and the LIB organizers, when really that’s not true.  These are the notes and reflections that I took over the course of two days.  Let me be clear. This festival hit every nerve and emotional point of my brain, heart and body.  The food was great.  The music was perfect. Tony’s speech was inspiring and the weather was outstanding!  This is a festival I am very much looking forward to attending next year and years beyond.

Special Thanks: Langdon + Flynn Communications and the Susan Magrino Agency

Photos: All photos were taken by Chase McCurdy.  Learn more about him here.