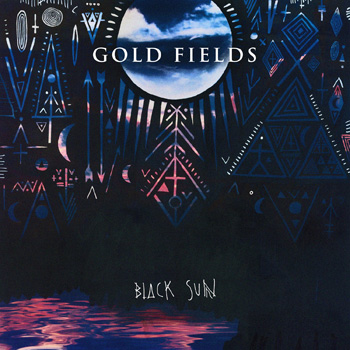 Unrolling a parade of beats amongst a higher octave synthesizer Gold Fields‘ debut album lands smack down inside a musical movement.  Black Sun is current and fresh, and though you could list about ten more bands that package nicely into this genre, Gold Fields bumps and smokes its own flavor with delight.

Vocals entice you with confident accent-infused falsettos, with background serenades pampering you along the way bringing you to a bolder sound by the end of the tracks.  You instantly gain respect for the storytelling based solely on the pride established through the sensual nature brought to Black Sun (“Treehouse,” “Happy Boy”).  Before you get the wrong idea, I’m not comparing Gold Fields to John Legend.  There is a lot more that goes along with this sense of sexy, most notably the instrumentation has a large part in leading eleven tracks to hit the spot.  The simplistic foundation of the synthesizer becomes overcastted at times with island percussion (“Moves”) or tribal (“The Woods”) creating upbeat and exciting tracks.  WALK THE MOON attributes are infused within, yet Gold Fields is able to kick up the maturity and continue along the path where fuzzy unity takes precedence over individualization of instrument and vocals.

Black Sun’s atmosphere is constant throughout, where vital contrasts are heard at a deeper listen than overall.  The pop melodies that gain speed and determination by the end of each song escalate this album into notability status.  Never settling or hovering just below peaking, many songs reach to a break that is expected and appreciated.   This young quartet from Australia host catchy movement through a plethora of diverse beats, cornering you with sensuality, and controlling you with favorable tracks like “Dark Again,” and “Ice.”