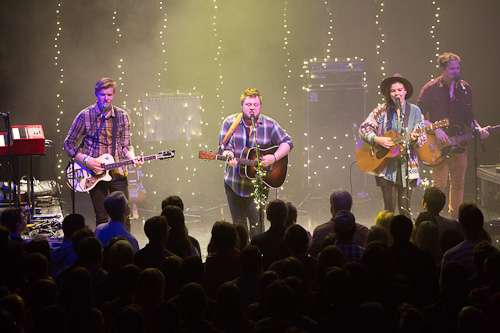 Dimmed lights and a hum of quiet conversations were set to the Sigur Ros-esque music filtering through the speakers of the history-rich and nostalgic Orpheum Theatre in Boston.  Though the squeaky seats were positioned rather closely to one another (evidence this theater was built before Coke and fast food engulfed American eating habits), it only made for a more communal atmosphere.  A perfect fit for an Icelandic folk-rock band.

Elle King greeted the audience with a southern twang and an energetic gusto.  Forcing the audiences’ attention onto her and her alone with a banjo-playing, Janis Joplin rasp attached to a “men are cheating bastards” attitude, she left the follow-up act, Soley, in quite a predicament.  American audiences are suckers for fowl language and dirty lyrics, which resulted in embarrassed laughter and cheering during King’s cover of “My Neck, My Back.”  Frankly, it was a really great cover, with a catchy tune that poses for uncomfortable moments as I regurgitate lyrics in social settings.   Soley, a less-intensified Icelandic Grimes, serenaded us with subtly beautiful and mellow electronic melodies.  Having to really focus in order to grasp the transitions, it made for a more difficult job that intoxicated Bostonians were less in the mood for than hearing slang for female body parts.  Though some missed out on appreciating Soley’s ability to create looping melodies and harmonies, the crowd was able to connect an eerie mood with similarly reflected lyrics.

Seven figures armed themselves with instruments to the screams of amplified fans.  Casually and determined, they began “Dirty Paws,” to the furthered eruption and immediate rising of the entire theater.  Dancing and singing ensued, in a beautiful back-and-forth between Of Monsters and Men (OMaM) and those who came to be entertained.

Playing most of their entire album, My Head Is an Animal, and a Yeah Yeah Yeahs cover, there was nothing disappointing about this emotional performance.  As if every ounce of energy, every beautiful and painful moment in their lives was thrust into this single show, flooding the theater with passion.  This passion was not only in playing, but to bridge their laughter and tears to those who were willing to connect so eagerly.

With all songs under 6 minutes, OMaM only capitalized on extending solos for more dramatic moments, including “Lakehouse.” The latter was drenched in both drama and symbolism, as they carried out the song for longer than the presumed 5:42, and brought the Iceland flag up to center stage carried by a native fan from the audience.  The moment was one that will forever remain in my schema of both America having the ability to be a supportive breeding ground for cultural differentiation, as well as the sense of our home having significant connections no matter how much we may want to disagree.  Everyone was cheering for Iceland, ecstatic that near the holidays OMaM and the preferred fan were able to also gain a feeling of home while being surrounded by the powerful nature of diversity.   Needless to say the outro for “Lakehouse” went on for quite a bit.

“Six Weeks,” among all the other songs were performed with such intensity that seeing them live is the one true way to listen to My Head Is an Animal.  All seven members played with knowledge that all of them were a key component in creating each and every note, riff, and melody.  Everyone was right there with one another; audience to band member, band member to band member, and audience to audience.  Of Monsters and Men love what they do, they are extraordinary at what they do (specifically the female playing trumpet, keyboard, accordion, and stand-up bass drum), and able to share these significant elements with those who came out on a blustery Monday night in Boston to embark upon this imperative presentation.