PIPA & SOPA are dead for now…Part 1 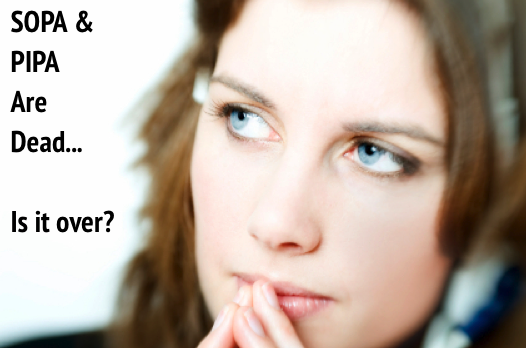 Google is involved in everything we do everyday including the regulatory front.  How could they with one swift ten million dollar lobbying effort destroy two pieces of legislation (PIPA & SOPA)?  Simply put, these bills would’ve regulated the search-engine-giant similar to what happened to them for showing illegal ads for fraudulent Canadian pharmacies.  (They ultimately settled with the U.S. government for $500,000,000.) They don’t want to be regulated (you wouldn’t either) because it will ultimately cost them a portion of the $28,000,000,000 (billion, number typed out for EFFECT) in advertising revenues Google earned in 2011.

You’re probably asking yourself “Does Google does this for real?”

Example: “Fun. We Are Young mp3 free” (I will not post this link, rather point you here.)

Note the ads that are on this site that you clicked on for the free mp3.

NOTE:  Its rumored that Google has been working with labels to help suppress some of these links.

Most probably, although not always, Google helped to facilitate these ads on this website.  Google pays the site for the ads if/when they are clicked on by you and me, while retaining a portion of the revenue. They are in business to sell ads placed on websites.  This is the primary revenue generator for Google.

How much does the artist make out of the above deal?  $0.00  Zero dollars and Zero cents.  It should be noted that although this technically is a revenue loss for artists, what would prevent the user from going to YouTube to listen to the song once, or Spotify/Grooveshark, etc. etc. getting their “fill” on these other free-use services and moving on (Yes VEVO is doing SOME good so far)?  Its the ease of consumption that works for the user here.  The great dilemma is, are some or all of these channels creating new fans which ultimately adds to the artists bottom-line (concert tickets, merchandise, valuable data for future marketing, etc. etc) or does piracy hurt the revenue and growth of the artist?

The early position is although YouTube and Spotify are generating super small revenues (~.003 for each spin/play) its better than piracy which earns the artist zero.  Spotify and YouTube are limited by the countries where their services are available.  Piracy networks are everywhere and its yet to be proven one way or another if it ultimately helps or hurts an artists bottom line.  If kids can access your music in China, how can you turn a profit on all those ripped albums unless you can actually go there and tour? Conversely, if you have 5k digital albums stolen in St. Louis, played there last year to 100 and are now playing to 1000, didn’t it all work out?  To live or die with piracy has not been decided, yet.  It might take decades of data before we can quantify to what degree piracy is as a support-arm or downfall of digital music.

Were the labels themselves foolish for how they reacted to Napster and piracy? Yes, they mishandled this, as they traditionally have new technologies. The music industry is a business and exists to make money.  This is often forgotten by the artists that make the music and the fans that don’t understand the machine. A business has to make money to perpetuate itself, often leading to very tough decisions. Decisions that almost never please the infrastructure of a company or the masses it services.

The bottom line was the PIPA/SOPA legislation wasn’t ready for the major leagues, yet is a precursor to something inevitable.  Google, Facebook, Tumblr and the internet community may of flexed their temporary-muscles but the RIAA, MPAA, UNIVERSAL MUSIC, SONY MUSIC, WARNER MUSIC and EMI (or is it UNIEMI now?) are not going to let this go until something is done to give a bit more control back to the copyright holders, and the companies that financially enable those copyrights (ie. the labels). This might not be the next step either, as the latest rumors have the RIAA and IFPI suing Google for file sharing results.

Part II, on Friday, will discuss some of options that make sense, so far that is.