PIPA & SOPA are dead for now…Part 2 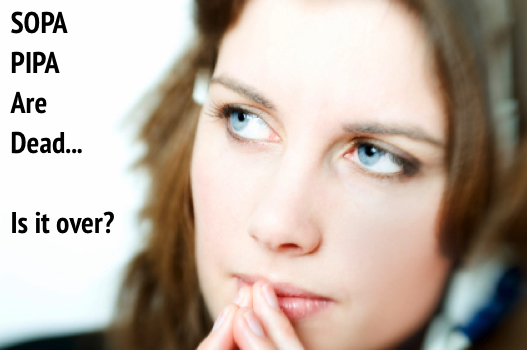 Part 1 can be read here.

We know that Google doesn’t want to be controlled.  Why would any multi-billion dollar company want to be forced to close revenue streams especially in this economy?  The problem is that the system didn’t prepare when music went digital.  The RIAA wanted mp3 players outlawed, the major labels refused to adapt and Sean Parker changed the digital music landscape forever.  My generation and younger has been taught that piracy is “acceptable”.  We think $18 was way too high for a CD and why pay .99 for a single when I can get it for free with almost no repercussions.

We live in a world filled with ways to cure “ease of consumption”.  If we want tv we can go to justin.tv.  If we want videos, of any type, we go to YouTube.  If we want music we can go to various channels and get the songs for free.  Just recently, the biggest digital locker, filled with hundreds of thousands of pieces of copyrighted material, was put to bed permanently.  Was this a cure or a band-aid?

Here’s a huge thing we don’t understand.  The internet is in its infancy.  We are just learning about this behemoth and where it will take us is anyone’ guess.

Here is what you should know and understand.  Where piracy reigns as king is distribution.  Its distribution channel is the biggest on planet earth.  I do not think major regulation will be seen without dystopian consequences.

What can we do to slow down the progress of piracy?  Is it too late?

Fred Wilson, Venture Capitalist and all-around music lover, thinks we should black list certain websites.  Simply put, warnings would “pop-up” on known pirate-sites while giving the user alternatives to white-listed sites.  An independent body would determine the sites that are “good” and “bad”.  This would empower the Google, Facebooks and browser companies of the world and show a tremendous step in the right direction.  If people knew consistently that they’re infringing it might prevent them from the act itself.  This isn’t a guarantee and could fairly easily be implemented. Google already has powerful tools that eliminate child pornography and illegal pharmacies from search and YouTube! Its rumored that Google already is working with major labels and studios to change the search algorithm for pirated material despite the other rumors that have the RIAA and IFPI ready to sue Google for not doing enough.

The other alternative that I recently read about is the Free Internet Act. (pw: redditcat)  A group started and supported by the reddit community.

The Free Internet Act: An international bill to promote prosperity, creativity, entrepreneurship, and innovation by preventing the restriction of liberty, and for other purposes.

The goals of this treaty are lofty, even referred to as “lets aim absurdly high, so that we can back down and reach a compromise” similar to the SOPA/PIPA pro-lobbyists!

While both Fred Wilson and the reddit community may have good intentions, the major labels and studios will go to the end of the legal system in each country to kill piracy.  Piracy is clearly in its Golden Age, and its easy for anyone to see that regardless of what side you stand on.

Some albums wouldn’t have been finished without piracy (plug-ins, applications, software) and during this “Piracy Era” some artists have experienced a bigger worldwide presence than ever thought of before (Lady Gaga, Adele, Justin Bieber).  More music is being produced and released and this cannot be a bad thing.  Ultimately as loyal fans of the artists we love, we’ll continue to reward them one way or another and keep them in the cycle of creation.