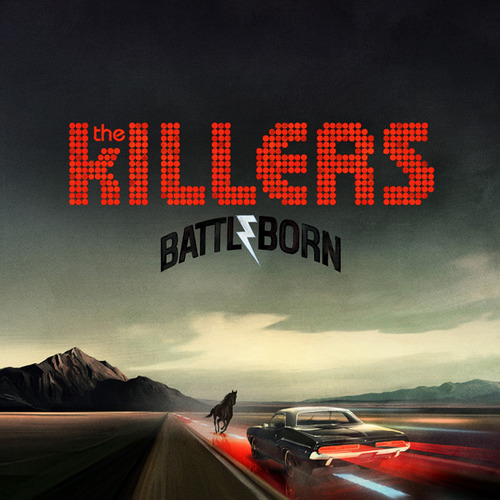 After a four year hiatus, where Brandon Flowers solo project never quit fulfilled your basic Killers need, The Killers return with their fourth studio album Battle Born.  Maybe the most anticipated album of the year (at least here at KTC) and your only sneak peak has been Runaways which in itself is a great single, but will the rest of the album be able to hold itself as fan-pleasing, as well as fresh tuneage?  People live and breathe The Killers, inspirational, motivational, retrospective, rock and roll, and glorious.  As you click play, you carefully step into a world that The Killers have created through sweat and determination, a story unravels around you and instrumentation is predominate, but not as much as Flowers notorious vocals.

After your initial crossing over, you are locked into a whirlwind of melodies, transitions of the upmost, and a bridge worthy of any past Killers album.  Flesh and Bone starts you off good, gets you stuck in the thick of it, and then leads you to Runaways.  At this time you probably know some of the words (“we cant waaaait til tomorrow”), and though you always liked the single, having it be a part of the album and following track one, there is a greater respect and much more excitement built up behind it.

Due to the storytelling, many transitions, and similarities in instrumentation usage, this album tends to unfold in a slower way.  It becomes unpackaged through more listens, as each song is separately shown through its multiple pivotal moments the more its heard.   There are no bland moments, rather everything is so intense and set to such a high standard, your poor brain is not used to taking it all in.  Were so used to disregarding songs because they are blah, that when we do get song after song of epic proportions we are caught off guard.   There is also a maturity here, an adult view in not only song lyrics, but as the instruments are delicately played and composition planned in a predominant and respectable focus.   With this tone set, the follow up is a sense of powerhouse rock, an hour and five minute empathetic and understanding fist to the sky.  Cursing and thanking the gods all in one sitting (or standing?).

As songs are developing through my speakers, I have moments where I am questioning what the genre could be.   For example, ”Here With Me” is a rock ballad, with a bit of a country flare and I get a déjà vu feeling of Vince Gill having a similar chorus in one of his more mellow ballads.  Due to Flowers voice (and only due to Flowers voice) I am not instantly repulsed like I would be if anyone besides was singing.  Still, this is my least favorite because a chorus about a cellphone picture borders on kind of lame in my perspective – and Vince Gill keeps popping his head in.  You then have the following track Matter of Time and its sunk pretty deep in rock and roll, especially in Oo-Oohs reminding you of Bang Camaro.   Whether rock-extreme or country-flare, Battle Born definitely has the distinct Killers sound and this late 70s instrumentation chord progression and synth chords that match the 70s rocker theme they seem to be going for.

Outstanding tracks that hit me first listen; “Miss Atomic Bomb”, a masterpiece of emotional fluidity and gorgeous progression, leading to a bridge of hair-raising magnitude.   Also housing that mature stance of life, looking back on being young and getting frisky to the radio.  I also enjoy “From Here On Out”, which is initially a two-stepping upbeat track that is more country than not and makes me question my sanity.  I think due to clapping, and of course Flowers vocals, it is an initial ooh, I like this because the words are pretty easy to learn and sing along to.  (Every Killers fan ever is giving me piercing glares  whatever).  Battle Born is an extension of Queen’s frenzy and epic level of harmonic choruses.   This track is the final (non Bonus version) and most favorite, with a tantalizing bridge and ever more intoxicating finale.

The Killers Battle Born is another hit, another respectable album they can place confidently amongst their others.   The maturity and 70s rocker synth theme carry song by song (for the most part) creating a complete package, one that you will need to keep playing in order to unwrap all the pieces.  Thank you boys for realizing that the music world would not be as exciting nor ferocious without you in it.