Quiet in Essence, Gushing With Talent: Stars’ The North 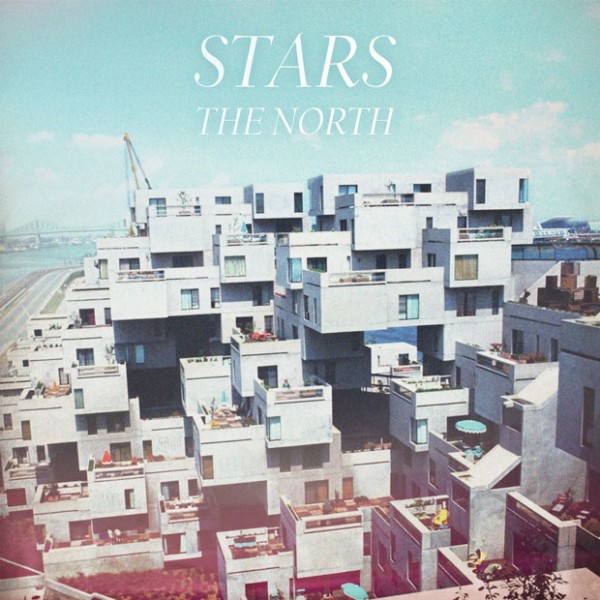 Hundreds of songs make up my iPod library, multiple songs are heard every week (some that I enjoy others not so much), and my knowledge of songs that I haven’t heard since I was ten is still alert and ready to re-hear music from 1997.  I am more critical of finding “unique,” “enjoyable,” and “significant” music as I am pleasantly bombarded with new things daily.   Every now and then a band comes along that I instantly fall in love with and subconsciously mash into those three categories without critiquing them until only after I have pronounced my undying devotion.   How does this happen to someone who is so focused on everything needing to be ‘perfect’ to accept as at least decent?  I don’t have an answer for this mystery, but I do have my most recent band that I have been brainwashed by.   Their name is Stars and they have been around for about thirteen years, only being introduced to me recently with the release of their sixth original full-length album (their discography includes a plethora of EPs, a cover, and a remix album).  The North was released on September 4th and is undoubtedly an ear-full of music perfection.

Pitchfork must have been listening to the Oklahoma City based band called Stars when they were doing their mundane review of The North.  This album didn’t jump out at me because things were loud and catchy, I didn’t start dancing or throw my volume up to sing along.  Instead, I listened and was captivated by how delicate everything was placed together.  Like the first time you were told that all the continents used to be one and you thought, of course, it’s perfect.  Even with 80’s synth sounds and Torquil Campbell’s David Bryne-esque  (Talking Heads) vocals you would hardly compare this to anything from that era.  There are so many other pieces happening that are quietly rejecting any comparison to other bands.   Verses, choruses, bridges flow so sweetly that you hardly notice the transitions while you float along in a dream-like state.   In some cases not picking up on a transition or not really having things broken down can be boring, but in this case unnecessary.

Along with pleasant composition, comes instrumentation that is on a level of excellence.  There aren’t any guitar solos or double bass pedals, but throughout each track are elements that are exactly where they need to be without you realizing something like a chord or note would sound good there.  Insatiably unpredictable.  Most songs are on the softer side, something I am not generally drawn to, but in the case of The North nothing matters, but what I am experiencing as I listen.  The back and forth between Torquil Campbell and Amy Millan (male-female) is intoxicating.  It just happens when it needs to, you don’t think ahead to “female vocals need to be next,” it just happens when it needs to.    That can be said for every aspect of the entire album.

“A Song is A Weapon” hosts one of my favorite lines on the album, as the first post-chorus strikes, music fades to strings as Campbell shares “I can only hope to kill you with a song, I’ve got one shot left to kill you with a song,” I fall in love.  It might be my inner-tomboy, but a song being used as a weapon is Bob Dylan-esque and reminds you of the power it possesses (whether political, or personal).  Then of course is the track that forced me to hit repeat, “Do You Want To Die Together.”  My inner-50s obsession comes to the front as the slow crooning begins, with beautiful conversational answer-back vocals.  The chorus switches gears, resulting in emotional lovers rage, and sends it out to the sexiest post-chorus instrumental piece I may have ever heard.   Don’t worry – if you listen and think “where is the sexuality?” that would probably be the more normal reaction.   The main slow beat with fluctuating synth and guitar distortion is overwhelmingly epic (which to me is sexy).

Listening to The North I am complaint free, and am so impressed I am listening to this more than Imagine Dragons (I have also been very busy and am in need of relaxation and musical perfection).   This is an album you can take a glass of wine to at home after a long day, put the volume up, windows up, and soak up every spectacular moment that you can.  The result is feeling as if you have had the best musical mind massage of your life.  The North is an extraordinary album that you must experience.